The health of the UK economy continued to deteriorate in September with the PMI surveys indicating the second-largest monthly fall in business activity seen since the global financial crisis, pointing to a second successive quarterly drop in GDP. The downturn has now spread to all three main sectors of the economy, leading to the largest monthly loss of jobs since 2009. Price pressures have also waned amid a further marked drop in demand for goods and services. 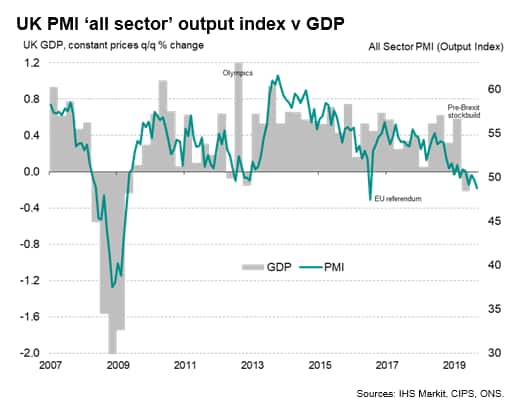 Economy at risk of recession

The seasonally adjusted IHS Markit/CIPS 'all-sector' PMI fell from 49.7 in August to 48.8 in September, signalling the second-largest monthly deterioration of business activity since April 2009. Only the shock immediately following the 2016 EU referendum saw a steeper monthly drop in output. The September reading rounds off a third quarter in which output fell to the greatest extent since the second quarter of 2009 on average. Historical comparisons with GDP indicate that the PMI is indicative of the economy contracting by 0.1% in the third quarter, with the rate of decline accelerating towards the end of the quarter (the September reading is consistent with a 0.2% quarterly rate of decline). With the official measure of GDP having already shown a 0.2% decrease in the second quarter, a further fall in the third quarter would constitute a recession.

Stock building ahead of the scheduled EU exit date of 31st October was again evident in September, but to a far lesser degree than earlier in the year, adding to signs that the economy may display less of a Brexit-related bounce in the third quarter than seen in the first quarter. 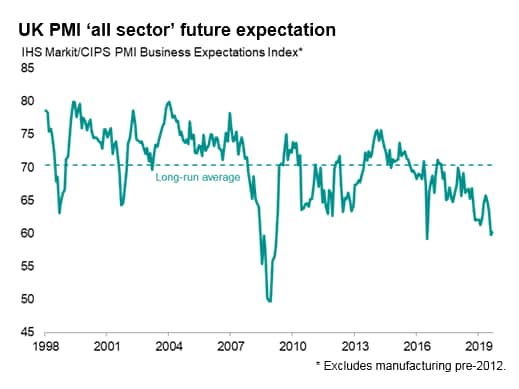 Looking at the details in September, output contracted across all three main sectors of the economy for the first time since August 2016, as services joined both manufacturing and construction in reporting falling business activity. The past decade has witnessed just five months in which service sector activity has contracted, two having been in 2019. Only computing and IT services reported any robust growth in September, while particular weakness was recorded in hotels, restaurants and business-to-business services. Construction reported the sharpest decline of the three sectors, with building work down for the seventh time in the past eight months, dropping at the steepest rate since April 2009. Manufacturing output also deteriorated markedly, down for a fourth successive month, although the rate of decline eased in part due to companies stocking up ahead of potential supply disruptions as the Brexit deadline nears. Inflows of new business fell sharply, dropping in all three sectors such that only July 2016 has seen a steeper overall loss of new business over the past ten years. The loss of new work meant companies continued to eat into backlogs of previously-placed orders, which subsequently fell to one of the greatest extents since the 2009 recession. 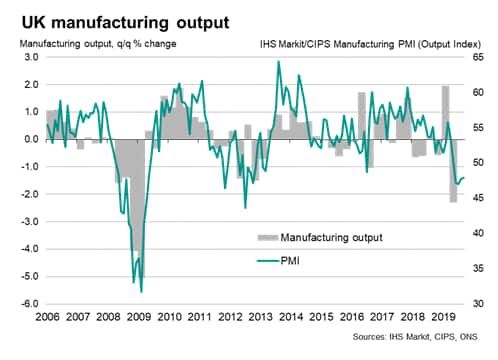 September also saw subdued business sentiment about the outlook. Businesses' expectations of their output growth in the year ahead rose only very slightly from August, which had in turn seen expectations among the gloomiest since 2009.

Brexit-related uncertainty dominated firms' worries about the year ahead, reflecting cancelled and postponed projects, a lack of investment and the prospect of possible disruptions from a no-deal exit on 31st October.

Jobs cut at fastest rate since 2009

While the early summer months had seen resilient jobs growth, the lack of new order inflows and the deterioration in business sentiment about the outlook has curbed firms' appetite for hiring in recent months. Cost cutting has also become more widely reported.

September consequently saw the steepest drop in employment since December 2009. Net job losses were recorded in all three sectors, with the service sector reporting the largest drop in headcounts for nine years, while manufacturing and construction jobs were shed at rates not seen since February 2013 and December 2010 respectively. 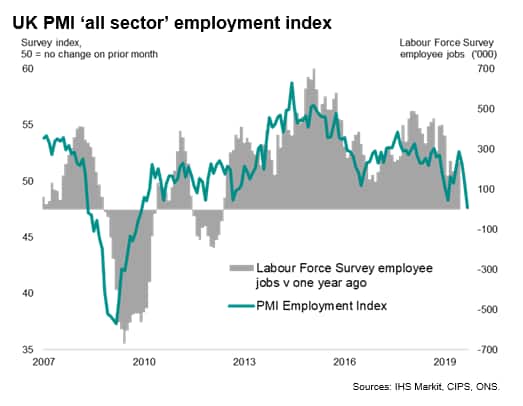 The near-stalling of selling price inflation occurred despite a further marked rise in firms' costs, notably in the service sector. The overall rate of cost increase is running just below the average seen in the year to date, often linked to rising wage, fuel and import costs. 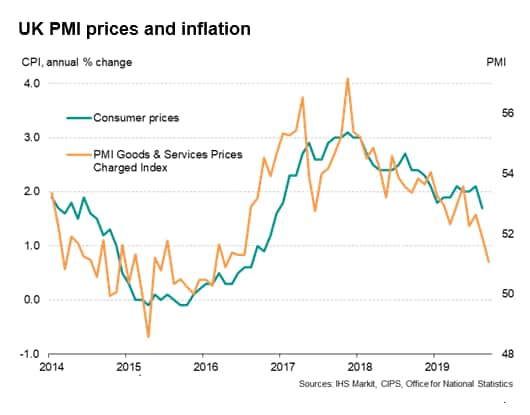 The latest data sees the surveys fall further into territory that would normally be associated with looser monetary policy, suggesting a greater likelihood of the next move in interest rates being a cut. Such weak PMI readings as those seen in the third quarter have in fact never been seen before in over 20 years of history in the absence of either recent or imminent stimulus, such as rate cuts or quantitative easing. Much will of course depend on any Brexit deal, but with the rate of global economic growth also slowing in recent months to one of the weakest in three years, UK economic growth is likely to remain under pressure even in the event of an orderly Brexit. 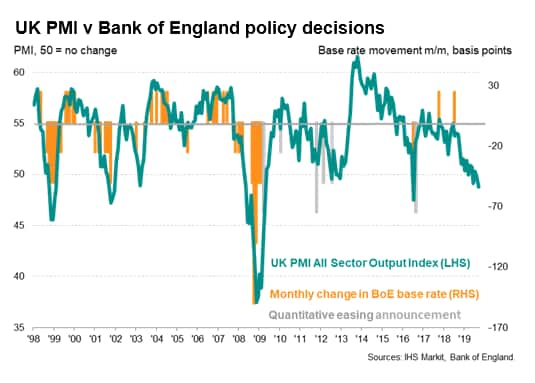