The UK construction industry is being hit by unprecedented shortages of raw materials and labour, the costs of which are also rising at rates far in excess of anything previously recorded in over two decades of PMI survey history.

UK PMI data showed construction activity slowing sharply in August. The headline IHS Markit/CIPS PMI slumped form 58.7 in July to 55.2, its lowest since February. While the index remained above 50.0 to indicate ongoing growth in total construction activity, the current reading compares with an historical average of 53.8. Given the amount of stimulus and relatively early stage in the recovery, to be slowing so close to the long-term trend is disappointing. 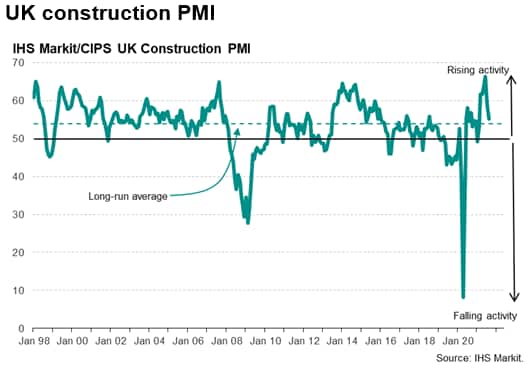 Part of the slowdown can be linked to weaker growth of new orders for construction work, with the survey's New Orders Index slowing for a third consecutive month to register a further cooling of demand growth from May's record high.

However, the New Orders Index remains far higher than the Total Activity Index, reading at 59.4 in August. Thus, activity has slowed much more sharply than demand for new work, meaning there must be other factors at play in explaining the sharp output slowdown. 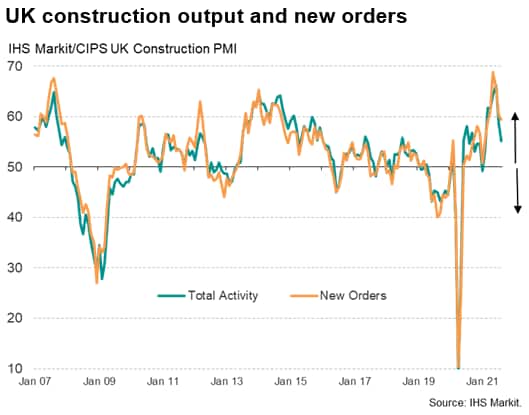 The slowdown can also be partly attributed to ongoing and near-record shortages of raw materials, as measured by suppliers' delivery times, which have in turn led to unprecedented price hikes for building materials in recent months. 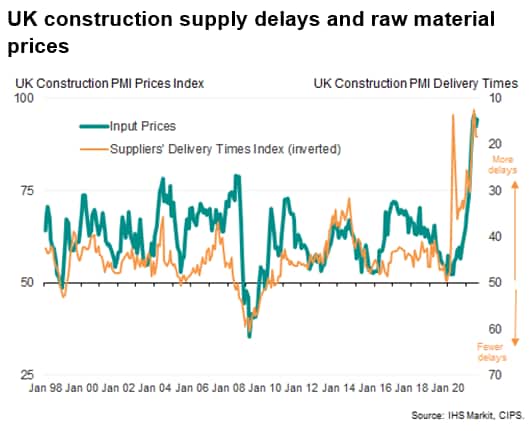 Adding to materials shortages are problems finding subcontractors. Subcontractors account for a vast amount of construction work, with the major building firms tending to hire specialists to cover most forms of specialist tasks, from carpenters and electricians to groundwork or foundation specialists and roofers. The availability of these subcontractors deteriorated on average at a record rate excluding last year's initial pandemic-related shutdown.

Just as raw material shortages are driving prices higher, the deterioration in subcontractor availability is pushing average rates charged by subcontractors higher. In August, the rate of wage increase was far in excess of anything recorded previously in almost a quarter of a century of PMI survey data. 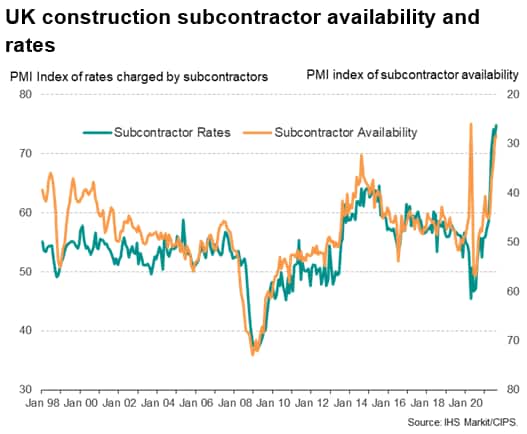