UK business optimism sank to its gloomiest since the height of the global financial crisis, bringing mounting evidence that the economy is struggling under the weight of rising Brexit uncertainty. The disappointing findings, and in particular the weakness of investment intentions, poses downside risks to economic growth in the coming year, especially when viewed alongside a broader global downturn in business optimism. 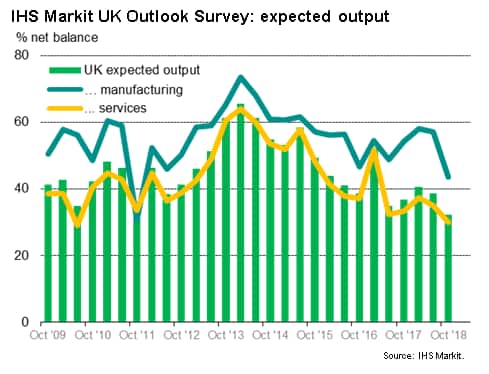 Companies' views on their future business activity levels fell to the lowest since comparable data were first collected in 2009, according to the latest UK Business Outlook Survey from IHS Markit. Profits expectations likewise sank to a new post-crisis low and investment spending plans were the worst of all countries surveyed by a considerable margin.

The UK findings form part of IHS Markit's Global Business Outlook Survey, which painted the gloomiest picture for two years as trade worries and political concerns intensified. Conducted three times per year and based on data collected from 12,000 companies worldwide, this survey asks PMI respondents to report on their plans for the year ahead. Metrics covered include production, capex, hiring and pricing plans, as well as their perceived threats and opportunities in the coming year. Sentiment fell across the board with the exceptions of Brazil and Russia, albeit showing greater resilience in the US. China saw the gloomiest business mood of all countries surveyed. 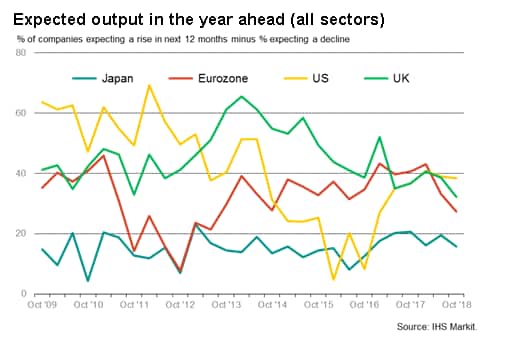 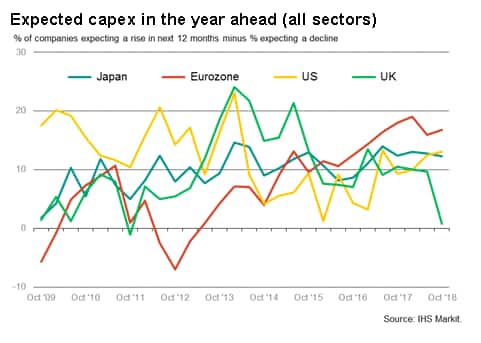 In the UK, optimism sank to the lowest since early 2009 in manufacturing and its lowest since June 2010 in services.

The Outlook Survey represents a natural opinion-based complement to the fact-based PMI surveys, and suggests recent weak UK PMI readings may persist. The latest UK PMI's showed business activity growth already having slowed sharply in October. With the exception of the snow-related disruption seen in March, the increase in output was the weakest since the immediate aftermath of the Brexit vote in July 2016. Historical comparisons with GDP indicate that the October PMI reading is indicative of the economy growing at a quarterly rate of just under 0.2%.

The gloomier sentiment survey also suggests that economic forecast for 2019 may start to get revised lower. While IHS Markit currently forecasts the UK economy to grow 1.1% in 2019, the consensus at the time of writing is for a relatively more upbeat 1.5%. 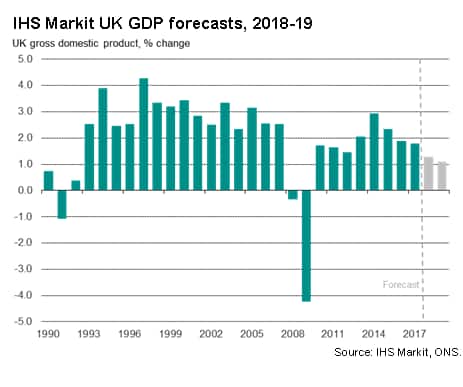 One of the most disappointing findings from the survey was a steep drop in planned capital expenditures. The proportion of UK companies expecting to raise their investment spending over the coming year exceeded those expecting a decline by just 1%; the lowest of all countries surveyed. In services, more companies expected to cut investment than expand, albeit only a slim margin. By comparison, no other countries reported negative sentiment about future capex.

Reduced planned capex spending related to both business equipment, plant and machinery, as well as investment on fixed assets, such as buildings. As such, the low investment spending intentions bode ill for future business growth and productivity.

Employment intentions were meanwhile the weakest since the start of 2013, adding to the general picture of cost-cutting amid growing risk aversion. 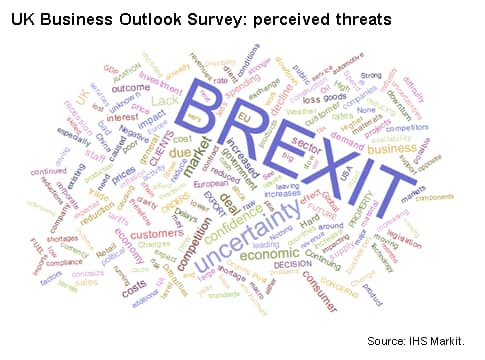 Full details of the outlook survey, including historical data for all metrics covered, are available to existing PMI subscribers. For more information contact economics@ihsmarkit.com.