The final PMI data for April indicated that the economy collapsed in April at a rate vastly exceeding anything seen previously in the 22-year history of the survey. Measures taken to contain the COVID-19 outbreak, including social distancing and the temporary closure of many non-essential businesses, led to record falls in output and demand across manufacturing, services and construction.

Jobs were also cut at an unprecedented rate as firms sought to reduce costs in the face of falling revenues.

Sentiment about the coming year meanwhile remained historically weak but the number of optimists nevertheless rose to exceed pessimists, providing a ray of light that April may prove to have been the toughest month in terms of the economic impact from the virus, albeit with the outlook likely to remain one of only a very weak and protracted recovery.

The headline all sector output index from the IHS Markit / CIPS surveys fell to an all-time low of 13.4 in April, down from 36.3 in March. Prior to March, the previous low in the 22-year survey history was 37.5, reached in November 2008. 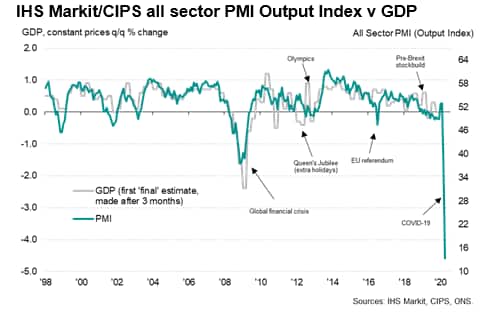 Record lows - by substantial margins - were seen for activity indictors in manufacturing, services and construction, indicting markedly increased rates of contraction in all three major parts of the economy for a second successive month.

The heightened rate of collapse seen in April reflected a full month of lockdown compared to only a partial month of closure in March. The lockdown, which commenced on 23rd March, included large swathes of non-essential businesses closing temporarily or adopting social distancing practices, which often resulted in reduced output.

While all major parts of the services economy saw record rates of contraction, consumer-facing businesses such as hotels and restaurants reported the steepest slumps in activity.

In manufacturing, the only pockets of growth were seen in food production, healthcare products and pharmaceuticals. 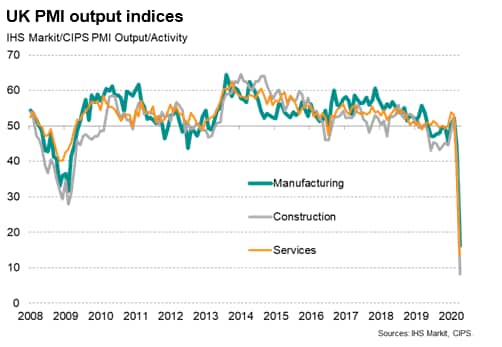 Output also fell due to demand declining at an unprecedented rate during the month, slumping both from domestic and overseas customers as spending by business and consumers alike fell amid the coronavirus crisis. New order inflows contracted sharply at record rates in all three sectors, with export orders for goods and services dropping to the greatest extent so far seen by the survey.

Construction reported the steepest rates of decline for both output and new orders, followed by services and then manufacturing.

Steeper decline than the GFC

Simple historical comparisons of the PMI with GDP point to the economy contracting at a quarterly rate of just under 5%. This compares with a peak rate of decline of just over 2% seen at the height of the global financial crisis.

However, a new non-linear regression model, which allows for the possibility that GDP could fall more sharply than the PMI might indicate at times of severe stress, points to GDP falling at a steeper quarterly rate approaching 7%. The actual decline in GDP could be even greater, in part because the PMI excludes the vast majority of the self-employed and the retail sector, which have been especially hard-hit by the COVID-19 containment measures. 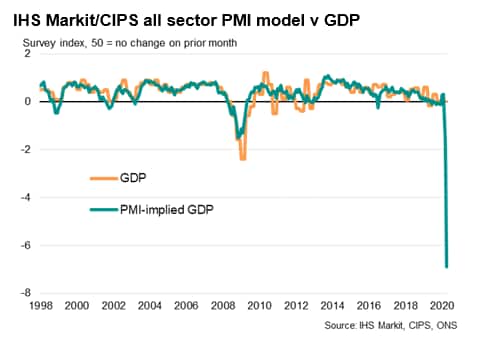 A record fall in employment was indicated in April as capacity was cut to save costs amid the slump in demand and enforced closures. A large proportion of these cutting staff noted that the fall reflected the use of the UK government's job protection scheme, but even if these furloughed staff are excluded from the index, the monthly drop in employment was still the largest ever recorded by the survey. 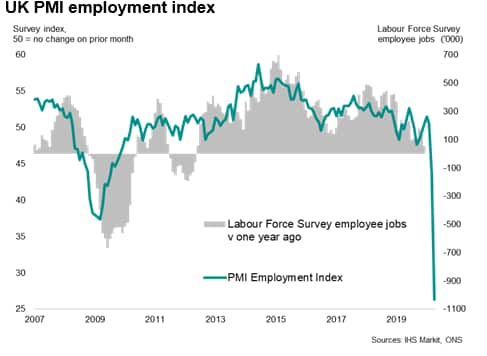 With the government due to soon announce how virus-related restrictions will begin to be lifted to restart closed parts of the economy, it is likely that the April output index reading will hopefully represent a nadir for the survey. Indeed, the survey's future expectations gauge lifted from March's all-time low. Optimists even exceeded pessimists in April, with the index rising back above 50 (albeit with pessimism growing stronger in the construction sector). 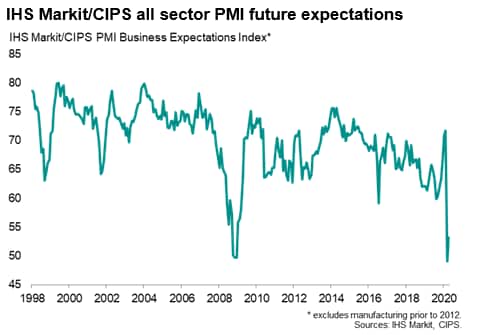 However, any return to growth still looks a long way off and will be from an exceptionally low base. Operating capacity is likely to be constrained in many sectors, and social distancing will remain a part of everyday life for some time to come even as restrictions are eased. The rise in unemployment and heightened job insecurity will dampen consumer demand and encourage more saving, while business spending will remain subdued due to weakened revenues and uncertainty about the future.

We nevertheless look to the May flash PMIs for what will hopefully be the first signs of some light at the end of the tunnel.

The latest survey data were collected between 7th-29th April and, although temporary business closures were widely reported, the overall response rate to the surveys was in line with the historical average.