Uganda’s Lake Albert Development – A brief look at the economics

On 1 February 2022, TotalEnergies announced that the stakeholders of Uganda's highly anticipated Lake Albert Development had taken the final investment decision (FID), over 15 years after the first discovery of commercial oil. The decision gives the green light to the Tilenga and Kingfisher upstream oil projects, operated by TotalEnergies and CNOOC respectively, alongside the construction of the 1,443 km East African Crude Oil Pipeline (EACOP) running through Uganda and Tanzania. The project is expected to enable production of up to 230,000 barrels of oil per day, generating significant revenue for the project partners and the Government of Uganda. TotalEnergies have also highlighted that the wider development is expected to generate around 160,000 local jobs and will provide national level socio-economic benefits.

In the Lake Albert Development FID announcement, the operator indicated that the sanctioned development represented an investment of $10bn. This reflects both upstream and midstream elements including the development of Tilenga, Kingfisher and the EACOP, with individual costs estimates of around $4bn, $1.5bn and $3.5-5bn respectively. However, the total investment of infrastructure relating to oil production from the Lake Albert Development is set to exceed $15bn. This includes the 60,000 barrels per day Kabaale Refinery in Hoima, estimated to cost $4bn, and commitments from the Government of Uganda of a further $1.4bn for the under-construction Hoima international airport and other transport infrastructure. 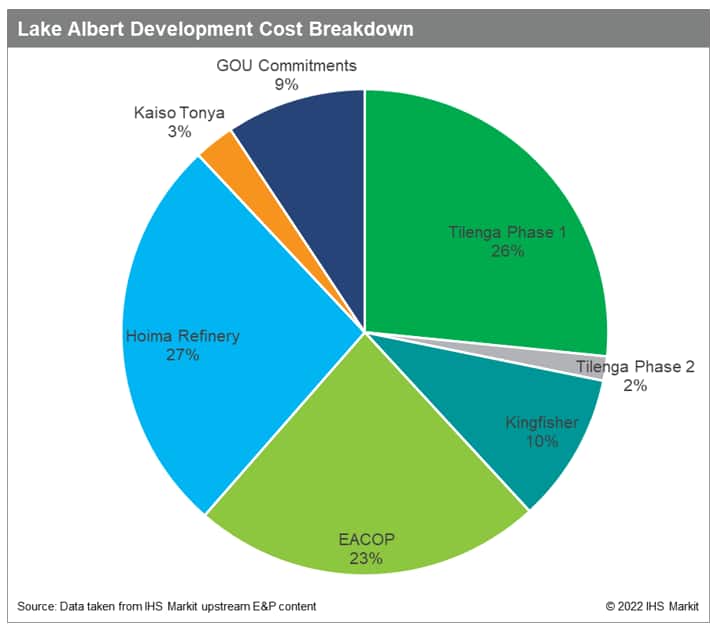 Under a $95/bbl price scenario the Lake Albert Development is attributed an NPV10 (Net Present Value at 10% discount rate) of $5,137MM with an IRR (internal rate of return) of 38.7%. This IHS Markit Vantage derived valuation reflects the full upstream development of the asset and includes the sanctioned Tilenga (Phase 1) and Kingfisher projects, the future Tilenga (Phase 2) and Kaiso Tonya infill projects, and the associated EACOP transportation tariffs. The midstream CAPEX associated with the EACOP and Hoima Refinery are excluded from the asset level valuation as the development is considered non-integrated.

The EACOP is crucial for the success of the Lake Albert Development and a prerequisite for first oil. Due to the length and transportation distance of the EACOP, a $12.77 per barrel transportation tariff is expected to be incurred by the upstream project partners. Details of the EACOP tariff were included in the Host Government Agreements (HGA) signed between the EACOP Project partners and the Tanzanian and Ugandan governments in April and May 2021. TotalEnergies, operator of the EACOP project, is also expected to raise $2.5bn in debt financing for the EACOP, a decision that has become a highly contentious issue with several key financial institutions ruling out any participation in the project due to environmental concerns and increasingly restrictive ESG investment criteria. With financing for the EACOP still to be secured and ongoing land acquisition issues, the partners target for first oil in 2025 looks increasingly optimistic.

Considering a more conservative long-term price expectation of $60/bbl, the Lake Albert Development yields a strong but reduced NPV10 of $1,871MM and a 21.6% IRR. This highlights the asset's resilience to changing market conditions.

Not only will the Lake Albert Development generate substantial revenue for the project partners but also for the Government of Uganda, as highlighted by significant cash flow to the government (Figure 2) and a government take of 82.5% at a $95/bbl price scenario. This comprises a combination of royalties and profit-sharing rates linked to average daily production, additional royalties linked to cumulative production and a corporate income tax rate of 30%. With the inclusion of production linked royalty and profit-sharing rates, the government will benefit from Lake Albert's high production rates and large production volumes, while limiting the impacts of market volatility typically associated with profit linked or oil price linked tax rates. This does however inherently imply increased capital risk to the project partners.

While attention has been primarily focused on the Lake Albert Development, the Government of Uganda has also started to lay the foundations for a more sustainable long-term energy strategy for the country. As part of the long-awaited Lake Albert Development FID, TotalEnergies and the Government of Uganda signed a Memorandum of Understanding (MoU) to collaborate on large scale renewable energy projects aimed at doubling the existing electricity capacity by 2030 through the development of solar, wind and other renewable technology projects. This indicates a combined commitment to providing sustainable forms of energy while also highlighting the need for near term upstream investment to support these future projects.