On 26 April 2021, Delek Drilling LP announced that they had entered a non-binding memorandum of understanding (MOU) with Mubadala Petroleum for their 22% share of the Tamar Project , located around 100 km offshore Israel in the Mediterranean Sea. The transaction will consist of an unconditional payment of USD 1 billion, with a contingent payment of up to USD 100 million depending on future terms being met.

The Tamar project, which includes the producing Tamar field and Tamar Southwest discovery commenced production in 2013, and by 2020 production had reached around 1 bcf/d (Fig. 1). Israeli production is set to increase further going into the 2020's with additional gas production now coming from the Leviathan field and future production from the Karish/Tanin fields set to increase country output to around 4 bcf/d by 2030 (Fig.1). This is assuming that Leviathan Phase 1B is sanctioned. 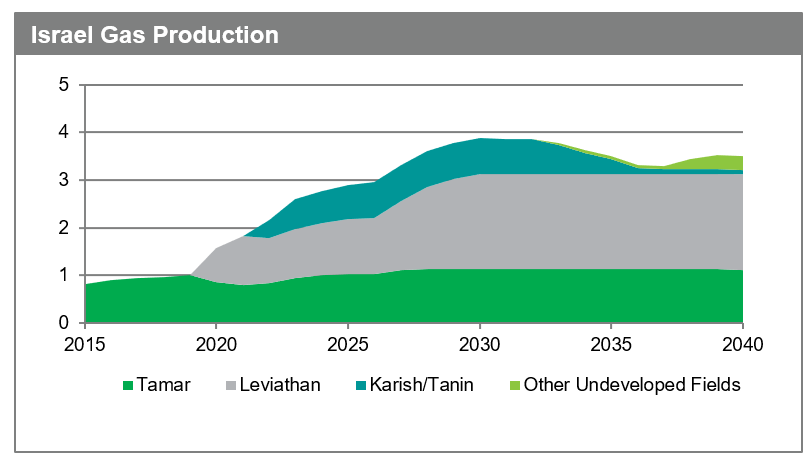 The deal between Israel and the UAE may have come as a surprise a year ago or so, but it has been agreed after recent strengthened relations between the two countries. In September 2020 the UAE and Israel agreed to normalize relations, sealed by former United States President Trump. The pact made the UAE only the third Arab State behind Egypt and Jordan to have normal diplomatic relations with Israel. This was followed with a preliminary deal to construct an oil pipeline from the Red Sea city of Eilat to the Mediterranean Port of Ashkelon, which will enable oil exports to Europe by avoiding the Suez Canal and ultimately saving on time and costs. More recently, commercial flights have been launched from Abu Dhabi to Israel and discussions were announced at CERAWeek that there are plans to create a Middle East electricity transmission network between Israel, the UAE and Egypt, possibly expanding the Gulf Cooperation Council Interconnection Grid (GCCIA).

Given that Israel is swiftly transitioning power generation from coal to gas, the Tamar transaction could enhance the possibility of connecting Israel with the GCCIA, assuming there is backing from other member states. The Tamar field is forecasted to offer a low point forward breakeven price, stable positive cashflow for many years to come, and minimal future investments as most capital expenditures have already been sunk (Fig. 2). The development of Tamar Southwest will require future investments, but due to Tamar's reservoir depth and pressure it is anticipated that wells will continue to be highly productive, limiting the need for expensive new wells, well workovers, or well interventions in the near term future. 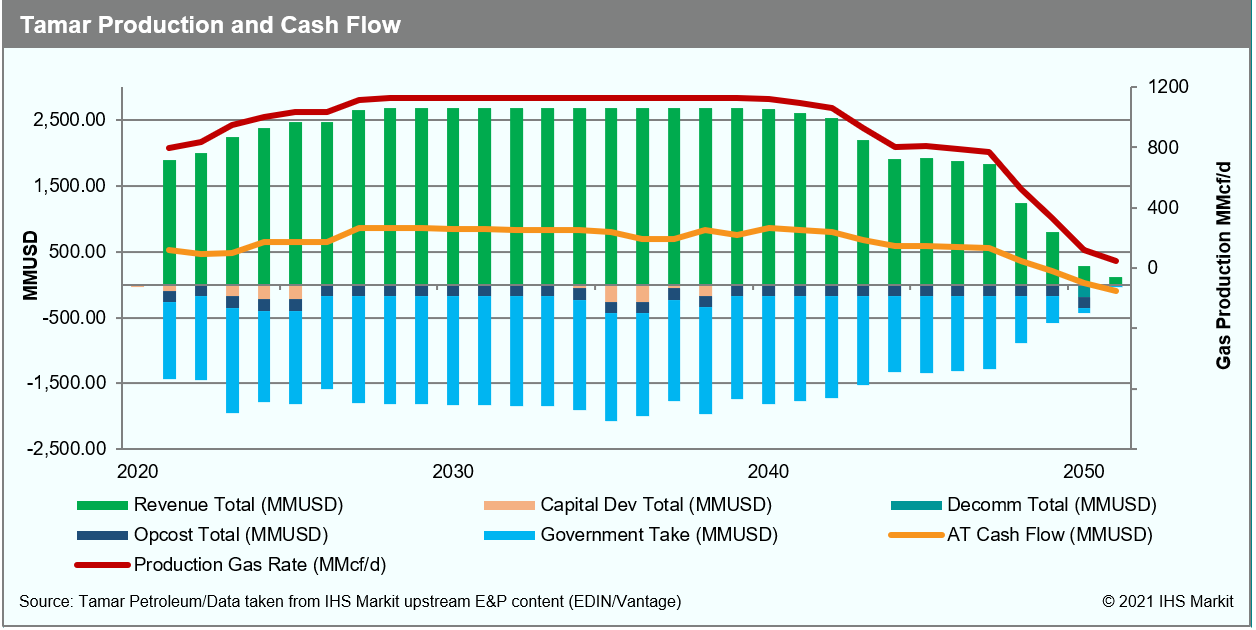 Israeli legislation requires Delek to dispose of their entire share of Tamar by December 2021 to comply with anti-monopoly regulations. Noble Energy Mediterranean Ltd, a partner at the Tamar Project were also forced to downsize their share in Tamar from 36% to 25% in 2018 and they sold their share of Karish/Tanin in 2015 to avoid creating an Israeli gas supply cartel. This legislation may have enabled Mubadala to purchase Tamar under the market value when comparing against recently published cashflow analysis (Fig. 2). The lower transaction value alternatively could be factoring in oversupply as new production from Levaithan and Karish/Tanin might undercut Tamar's sales gas agreements when they are renegotiated.

Martin Sherriff is a Technical Research Manager for Upstream Energy at IHS Markit.