Two-month rise in gas prices can be sustained

In the last two months, the spot natural gas price at the Henry Hub has shot up by nearly 42%, and futures prices have gained even more sharply—and market fundamentals suggest that the higher prices can be sustained and even increase.

The OPIS Daily Price Index showed Henry Hub at $1.554/MMBtu on July 3, and $2.203/MMBtu on September 3. That's a gain of 41.7%, which even includes a retreat of nearly a time during the first two days of this month as prices retreated due to forecasts of cooler weather across the eastern part of the country. 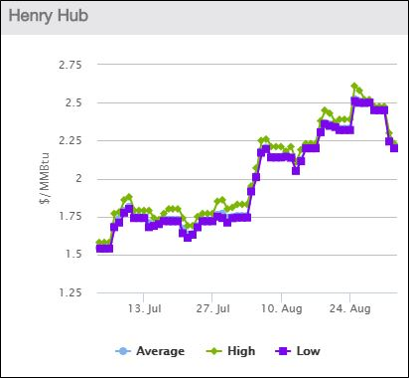 Futures prices did even better, gaining 46% in the month of August alone, the best one-month gain since 2009, according to Dow Jones. The Henry Hub front-month futures price settled on August 31 at $2.63/MMBtu.

More price gains could be coming.

IHS Markit's recent short-term price outlook published on August 25 forecasts a Henry Hub price of $3.21/MMBtu in 2021 and $3.00/MMBtu for 2022-23. This compares to $1.87/MMBtu forecast for full-year 2020. "We currently expect the tightening supply/demand balance to raise Henry Hub cash prices from about the $1.80s/MMBtu in September-October to the $2.50s/MMBtu by year-end and the $3.40s/MMBtu in February-March, assuming normal weather," IHS Markit said.

Looking at EIA's data, the last time that February-March prices were sustained above $3.00/MMBtu was in 2014, and the last month at any time of year with prices in that range was December 2018.

What's driving the price rebound? In a phrase: falling production. With oil and gas producers pulling back due to the recession and low oil prices, gas production has fallen, and prices have gained as a result.

Lower production has not only changed the broad supply-demand picture, but it's changed the focus on where incremental gas is coming from, and therefore how prices will signal to producers.

"The collapse in oil prices this year has triggered a combination of shut-in and structural declining associated gas volumes, shifting the production spotlight firmly back on to nonassociated gas producers. Nonassociated gas producers are being called upon to offset associated gas weakness in 2021 and deliver growth necessary to fulfill market need," IHS Markit said. "This is no small feat for a group of producers with strained balance sheets and, for those outside the Marcellus/Utica/Haynesville, an orientation toward harvest rather than growth; the group's ability and willingness to deliver remains uncertain."

By spring 2021, IHS Markit sees the Haynesville dry gas play showing production gains, followed later in the year by Appalachia's producers (helped by the takeaway capacity of the eventual startup of the Mountain Valley Pipeline).

On the demand side, winter 2020/21 will be basically flat compared to last winter, according to IHS Markit, with LNG exports and higher domestic power sector loads being offset by offset weaker commercial and industrial demand because of COVID-19. But this still adds up to a draw of about 7 Bcf/d more than was experienced in winter 2019/20, again thanks primarily to lower US production. Moreover, IHS Markit sees the potential for greater upside if the weather is colder than normal.

Two other factors should be considered, both of which will act to keep some downward pressure on gas prices this winter and next year. The first is that demand in the power markets is price-sensitive, with fuel-switching still an option in some parts of the country if gas prices rise too much. The second is the fact that gas inventories are healthy right now, even though storage injections this summer are on track to be about 3 Bcf/d lower than a year ago. IHS Markit is forecasting that gas inventories will start the winter demand season at about 4 Tcf, which is above 2017, 2018 or 2019, and the second-highest on record.

Reprinted from PointLogic News. For more, visit the PointLogic website.