Zambian economic output is being held back by shortages of power and money, with 2019 looking set to see the weakest GDP growth for 20 years. The economy is still some way off recording increases in business activity, despite signs of improvement in new orders.

November PMI data highlighted the impact that issues outside the control of local companies are having on their output. Business activity decreased at a solid pace again during the month, with the rate of contraction little-changed from that seen in October.

The marked fall in output was recorded in spite of more positive signs in terms of customer demand. Although new business continued to fall in November, the rate of decline was only marginal and the weakest in the current nine-month sequence of contraction. Some survey respondents indicated that customer numbers had shown signs of improvement, despite remaining low overall. We would therefore expect to see some movement towards output growth returning in response, but this has not been the case. 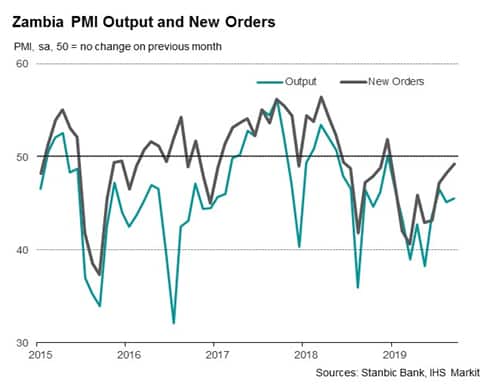 The fact that the decline in activity is giving little indication of softening, despite an improving picture regarding new orders and three successive months of employment growth, has been linked by companies to two key factors.

First, a lack of money in the economy has been widely mentioned during much of 2019. Foreign exchange reserves look to be covering only around two months' worth of imports, below the generally-advised minimum of three months. This has led to downward pressure on the Zambian kwacha, which has depreciated for three months running against the US dollar, and in October had lost 11% of its value compared with one year previously. 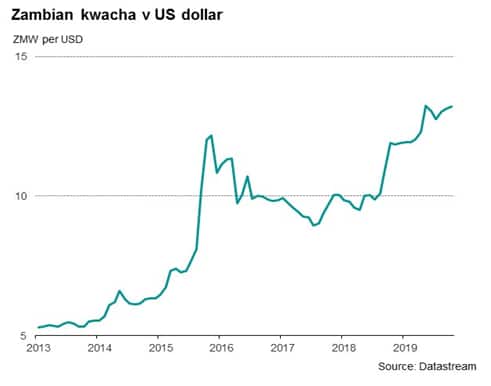 Second, power shortages have negatively impacted firms, particularly in the past two months. Power supply issues emanate from a drought in the country. As Zambia relies on hydro-electric sources for around 80% of its electricity generation, the lack of water feeds through to a reduction in electricity production. As a result, 'load shedding', or the restriction of power at certain times, has been introduced, leading to power shortages at homes and businesses alike.

Looking at how often different factors are mentioned as having had an impact on business activity, we can see that earlier in the year money supply issues were much more of a barrier to operations, but in recent months reports of power shortages have become more prevalent. This now appears to be the main factor preventing business activity returning to growth. 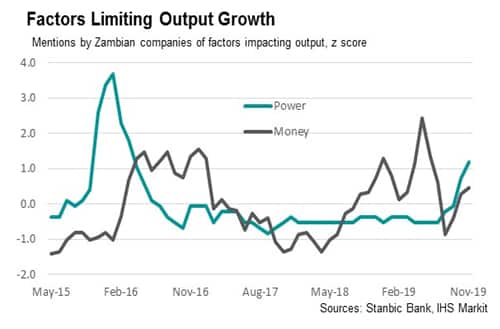 Based on historical relationships, the current PMI data suggest that economic growth is running at around 3% year-on-year during the final quarter of the year. For 2019 as a whole, IHS Markit forecasts a rise in GDP of just 1.5%, which would be well down on the 4.1% increase in 2018. In fact, growth could be the weakest for 20 years.

Whether Zambian firms will see output return to growth by the end of 2019 largely depends on factors outside their control. December PMI data will be released on January 6th, and will provide the first indication of how the economy fared heading into 2020. 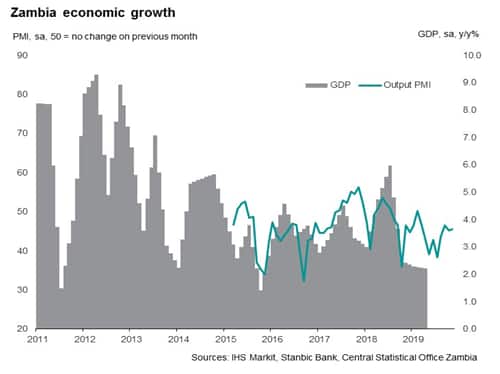