Twenty-six states will raise their minimum wage in 2020

Of the 26 minimum-wage increases across the country in 2020, 18 of them will be due to inflation indexing and cost-of-living adjustments, while the rest are due to legislation. Connecticut, Illinois, Maryland, New Jersey, and New Mexico passed legislation in 2019 to increase their wages in 2020. The other three legislative-increase states—Arkansas, Delaware, and Massachusetts—have been raising their minimum wage in increments as voted upon in previous elections and ballot initiatives. 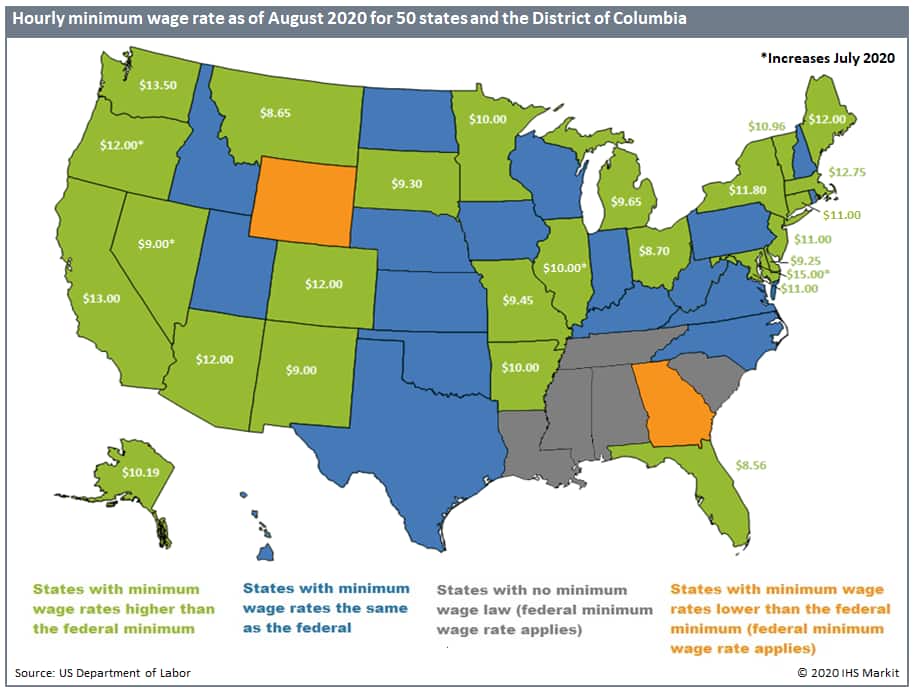 By the end of 2020, the highest minimum wage rate will be in the District of Columbia, at $15.00 an hour, followed by the state of Washington, at $13.50 an hour. Seven states will increase wages to $15.00 an hour in the future, as mandated in recent elections. California will be the first, in 2022, followed by Connecticut and Massachusetts in 2023, while Illinois, Maryland, and New Jersey will follow suit in 2024 and beyond. 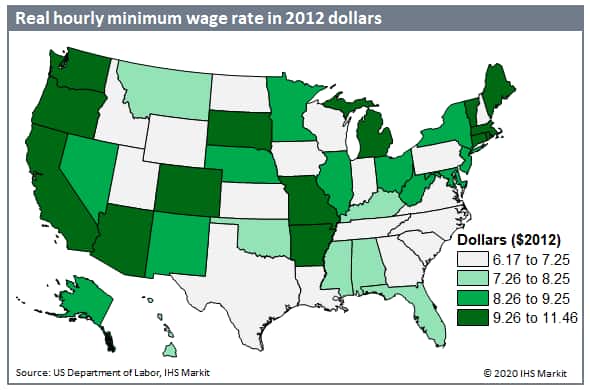 Using the Bureau of Economic Analysis's regional price parity (RPP) index, we can measure a state's minimum wage buying power for 2020 to see how the cost of living in that state compares with the nation. Looking at states' minimum wages in real terms (2012 dollars), the highest minimum wage rate will still be in the District of Columbia ($11.54/hour), followed by Washington ($11.40/hour). Arizona, Maine, and Oregon will round out the top five. There will be 10 states where the minimum wage is $10 or more in real terms, and 34 states will be above the nominal federal minimum of $7.25 an hour. Most of the 21 states that pay the federally mandated minimum wage end up paying less in real terms after RPP adjustments, so the buying power of a salary there is even lower than minimum wage. The exceptions are Mississippi ($7.59/hour), Alabama ($7.51/hour), Kentucky ($7.39/hour), and Oklahoma ($7.32/hour). After cost-of-living adjustments, the minimum wage in these states provides more buying power compared with other states that pay the federal minimum.

Economic studies ascribe a range of effects (positive and negative) to higher minimum wages. On balance, the impact hinges on whether the benefits of an increase in earnings for a small share of the population is outweighed by a proportional decrease in hours worked and employment in affected sectors. We do know that, for lower-income households, a high proportion of any increase in income will be spent, putting that money back into the local economy through increased consumer spending. Higher minimum wages also increase the cost of labor for businesses that rely on lower-wage workers, such as restaurants, retail stores, and hotels.

Recent research has suggested that higher minimum wages are one of the reasons that lower-wage jobs have seen the strongest wage growth in the past year. On the other hand, the recent tightness of labor markets is also lifting wages. Either way, rising minimum wages are a marker for a state economy with healthy wage growth. An underlying risk, however, is that during another potential economic recession, the inflexibility of a higher minimum wage could exacerbate job losses.

For our forecast going forward, the risk of recession is low and tighter labor markets in states will continue to drive wage growth, potentially for low earners. This would open more room for states, especially those with federal minimum wage rates, to increase their own minimum wages in the future.