On TV, content is crucial to retaining customers. Without fresh and satisfying high-quality shows, customers will inevitably look to other platforms for their entertainment needs. Traditionally, TV content has adhered to a fairly rigid structure for monetization via carriage fees and broadcaster advertising. Movies also benefit from the pay-TV ecosystem, but often an initial box-office run is enough to ensure the individual profitability of films.

For US pay-TV-video subscribers, many are chafing at the weight of monthly package prices, with average revenue per user (ARPU) hitting a staggering $92.30 in 2016, IHS Markit estimates. At the end of the same year, 1.3 million consumers ended their subscriptions to monthly cable services provided by US operators like Verizon, Comcast, Time Warner, and ATT. These subscribers who "cut the cord," so to speak, are known in the industry as cord-cutters.

And cord-cutting is going to continue, given the steady increase in ARPU that can be expected. In turn, this will result in less money available for content creation-unless ARPU increases can drive revenue faster than it could be lowered by a shrinking subscriber base. 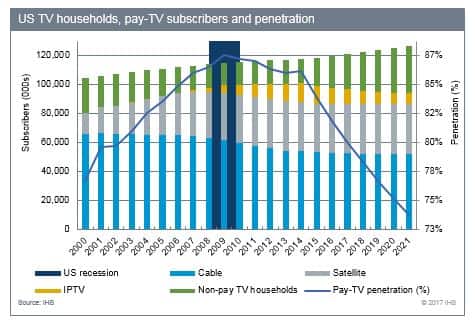 To a certain extent, the increases in pay-TV ARPU will make up for the loss of revenue due to cord-cutting and will be the norm through 2021. Even so, it seems inevitable that ARPU growth alone won't be able to keep pay-TV-video revenue growing indefinitely.

Some may argue that existing content businesses could have another revenue stream, in the form of over-the-top (OTT) video offerings such as Netflix. But can these successor services serve as a direct replacement for the existing pay-TV-video businesses?

The answer is no, as OTT offerings simply don't generate enough revenue to sustain the content creation ecosystem. In 2016 Netflix reported worldwide streaming ARPU at $8.61 per month and revenue of $8.8 billion-far less than what would have been required to support the diversity of content currently found on pay-TV video. In comparison, Comcast's monthly ARPU the same year was $83.19, with the company spending $11.6 billion on programming in order to bring in $22.4 billion in video revenue.

Is the channel business under threat of imminent collapse?

Again, the answer is no. However, what's likely to occur over the next decade is a reduction in the number of channels overall. Today, we're seeing some evidence of what is just the tip of the iceberg, and IHS Markit expects that there will be major changes in the channels being offered by the biggest US channel groups in the next decade.

In February 2017, following the release of its 2016 earnings, Viacom announced it would be refocusing its efforts on six key brands: MTV, BET, Nickelodeon, Nick Jr., Comedy Central, and Spike. The announcement doesn't necessarily mean the closure of channels like TV Land, Bet Jams, Centric, or CMT, but it does mean that the smaller and ailing channels won't receive the same attention and budgeting that they have enjoyed in years past.

Is this just a Viacom problem?

No. Like Viacom, the majority of the biggest US channel groups will also have several cable networks in their portfolio that will be underperforming and are thus ripe for reductions in both programming and marketing spend. The incursion of Netflix and other OTT solutions will have an even more disastrous effect on the long-term viability of independent channels. IHS Markit believes that pay-TV operators will be forced to pay carriage fees to major channel groups before they are able to allocate any payments for independent channels.

Still, as more video is being delivered through the open internet than ever before, creative solutions are also being developed that may allow content owners to neatly sidestep issues involving the reduced number of pay-TV-video subscribers. For instance, monetizing the use of data networks and bundling with third-party mobile and broadband packages have already proved effective in some markets.

Just the same, the prognosis isn't encouraging. While further solutions are likely to present themselves, the forecast loss of another 3.9 million US pay-TV-video subscribers between 2017 and 2021 points to a turbulent near future for the television industry.