The Turkish lira is once again at risk of a crash

The Turkish lira is on the verge of a crisis that would surpass what was experienced in August-September 2018. In the first two months of 2019, official data showed that some calm had returned to Turkish markets. Inflation remained high but had stopped accelerating. The lira was depreciating, but not too aggressively considering elevated inflation. Portfolio investments were flowing into the country on a net basis. Foreign currency reserves were climbing. This calm, however, has proven to be unsustainable, with instability risks high.

One notable economic vulnerability is the country's foreign currency reserves. Official data showed that, at end-March, total foreign currency reserves were as high as they had been since 2017 as measured by months of imports covered. Even when we factor out those reserves held at the central bank that actually belong to commercial banks because of reserve requirement ratios, import coverage was notably stronger in 2019 than it had been in well over a year.

However, import coverage improved in large part because overall imports are now extremely depressed. The value of total foreign exchange reserves was about 6.5% lower than it had been heading into the third-quarter 2018 lira crisis. Moreover, end-March reserve numbers belied what had been a sharp plunge of reserves that first occurred in mid-month that month, and again since early April.

Although the Central Bank of the Republic of Turkey (TCMB) has not officially explained the reasons for the extreme fluctuation of the reserves over the past two months, nor has it explained what has helped to buoy those reserves in the interim, an increasing number of reports are showing that the Bank is boosting reserves through swaps that are dangerously adding to the country's short-term debt obligations. 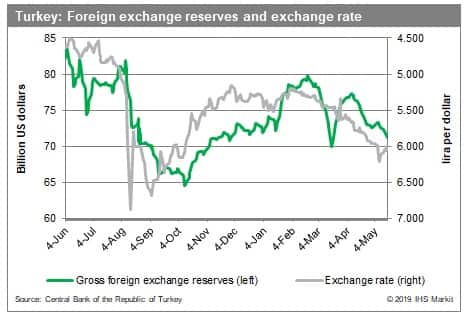 The drop of reserves is now commonly understood to be the TCMB propping up the value of the currency, in mid-March for political reasons ahead of the municipal elections that were held at the end of that month. Although the Bank replenished reserves in the following weeks, it once again intervened to try to stabilize the lira after the currency faltered in the wake of the announcement that the contested Istanbul mayoral election would be cancelled, and a new vote held in June. The TCMB reportedly sold off another USD2 billion from 8-10 May through swap operations to buoy the lira, at the expense of the Bank's foreign-exchange reserve levels, which had been dropping rapidly already.

The TCMB is taking such efforts because its official monetary policy has been unable to offer greater stability to the lira. With political pressure strong to maintain low interest rates, the Bank failed to increase its policy rates at its last meeting, in late April. Instead, in May, the Bank adjusted reserve requirements to release more foreign currency to the market and to soak up lira to try to shore up the Turkish currency, but to little avail. Additionally, the TCMB, on 9 May, suspended funding the market at its one-week repo rate and force funding through other, higher administrative rates, sending the average rate of funding upward. 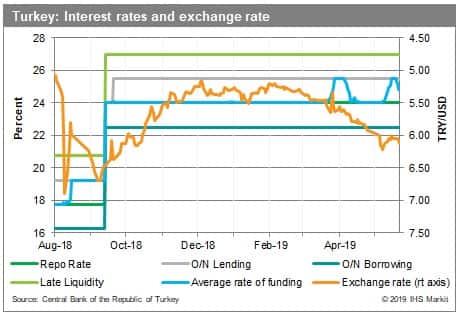 Lira instability is not over. Prominently, the potential imposition of US sanctions on Turkey regarding the purchase of the Russian missile defense units could trigger a steep fall, particularly against a backdrop of increasing questions about the integrity of the TCMB. Already, the lira was trading at around where it had been trading during the August-September crisis. Baseline expectations are that the lira will continue to depreciate strongly moving forward, but somehow Turkey avoids sanctions and a crash is avoided. The risk of a crash is high, however, particularly if indeed Turkey sticks by its intentions to purchase the Russian defense system, triggering US sanctions. This lira crash would likely be more severe than what was noted in August 2018. 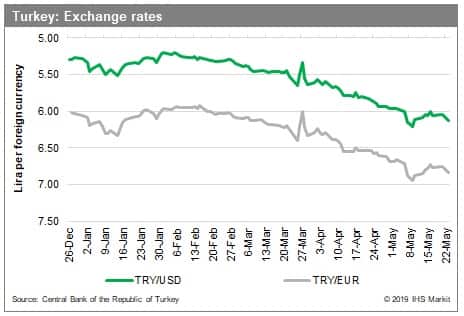 Contributing to the downward pressure of the lira is the depletion of reserves, in conjunction with a sharp rise of short-term debt. The future of the lira took a further negative hit with the recent Reuters report that the government may draw down on the TCMB foreign exchange reserves in order to address a yawning fiscal gap.