Following the installation of current Central Bank of the Republic of Turkey (TCMB) Governor Naci Aǧbal in early November 2020, the Bank has pivoted to more defensive monetary policy, raising the main policy rate at the November and December policy meetings by a total of 675 basis points. However, in the January and February policy meetings, the Bank's Monetary Policy Committee kept the one-week repo rate unchanged at 17.0%.

From October 2020 to January 2021, annual consumer price inflation jumped from 11.9% to 15.0%. In its press release alongside the February meeting, the TCMB acknowledges elevated inflationary pressures, deriving from domestic demand, exchange rate effects, rising global food and commodity prices, and growing consumer expectations. To battle these upward pressures on prices, the Bank pledges to maintain a tight monetary stance.

Along with a pivot to more defensive monetary policy, Aǧbal has also returned to international norms in policy setting, abandoning the Bank's daily adjustment in using overnight rates for funding the market and instead returning to utilization of the one-week repo rate, set monthly. 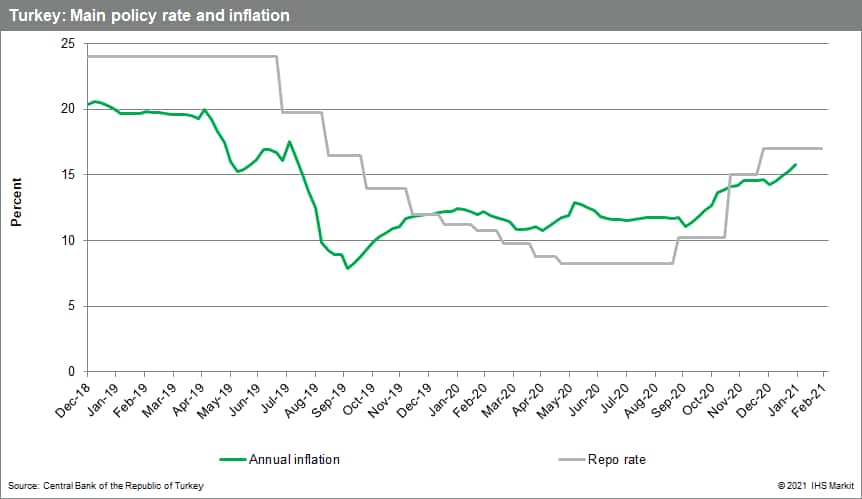 Under the previous governor, the TCMB had slashed the main policy rate by a total of 1,575 basis points from mid-2019 to mid-2020, pushing the one-week repo rate below the prevailing rate of annual inflation as of January last year. At the same time, to battle the negative economic impact of the COVID-19 crisis, the Bank directed the financial system to dramatically escalate domestic credit expansion. The strongly pro-growth cycle since early 2019 undermined the stability of the lira.

By October 2020, the lira was depreciating rapidly without any significant inflow of foreign capital. Moreover, the lack of foreign capital inflows was presenting the TCMB severe short-term debt repayment problems as the Bank had engaged in heavy short-term swaps to rebuild its foreign currency reserves with which it drew down to defend the currency. These issues prompted President Recep Tayyip Erdoǧan to install Aǧbal in November and shift monetary policy.

Despite a lack of a move in February, the Bank has committed to defensive monetary policy 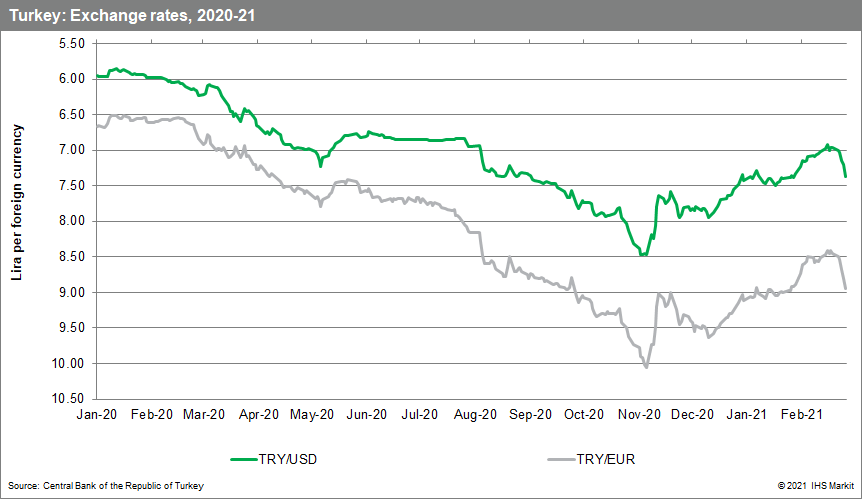 The initial pivot in monetary policy provided a stronger-than-expected lift to the lira from November to late February. Markets reacted favourably to the normalization and tightening of monetary policy under Aǧbal, IHS Markit believes that markets immediately prescribed too much confidence in the Bank's independence and that the rally of the lira was too vigorous. Aǧbal was the third governor in just over four years, with Erdoǧan showing little reticence in replacing the position ahead of the appointees' four-year terms. We continue to believe that the current defensive monetary policy is only being undertaken with Erdoǧan's tacit agreement, despite what the president says publicly. Should Erdoǧan grow uneasy with the difficult weak economic growth, we expect he will lean on Aǧbal politically to reverse policies.

Given continued political pressure, IHS Markit was unsurprised that the TCMB held interest rates unchanged in February. There had been some risk of another rate increase due to the faster-than-expected acceleration of inflation in January. However, the prevailing rate of inflation remained 200 basis points below the level of the one-week repo rate, providing the Bank justification for keeping interest rates unchanged.

Based on the concerns IHS Markit had that the market had overcorrected from November to mid-February, IHS Markit had already built into our forecast a resumption of depreciation in March. However, the depreciation of the lira in the days following the February meeting have been stronger than anticipated, prompted by growing market concerns that -- indeed -- monetary policy was not as independent as those markets initially believed.

Nonetheless, IHS Markit does not believe, either, that the TCMB will bring an end to its recent defensive position. Aǧbal has repeatedly, publicly pledged to not only maintain defensive monetary policy throughout 2021, but has even promised to further raise interest rates should inflation exceed the Bank's expected path. These public pronouncements are surprisingly bold given Erdoǧan's high-profile opposition to elevated interest rates.

With such public pledges from the governor - and based on our assumptions of tacit approval from Erdoǧan -- IHS Markit is maintaining our baseline expectations that TCMB policies remain defensive throughout 2021. The main policy rates will not be lowered at least until the third quarter, with the risk of another rate increase now higher given the late-February lira losses. A resumption of the rate increases in March would arrest the recent lira depreciation at around 7.5 per US dollar, around which IHS Markit had initially expected the exchange rate to have moved following the monetary policy pivot. Absent of a rate hike in March, the lira could slip farther, but likely remain at 8.0 per US dollar or slightly stronger - equivalent to what it had been prior to the second, December rate hike.