Turkish central bank actions may have come too late

At its regularly scheduled meeting on 7 June, the Central Bank of the Republic of Turkey (TCMB) raised its main policy rate, the one-week repo rate, by 125 basis points, to 17.75%. This was the second substantial hike to the rate at which the Bank funds the markets within three weeks. Previously, at an extraordinary session on 23 May, the TCMB hiked its main policy rate by 300 basis points. 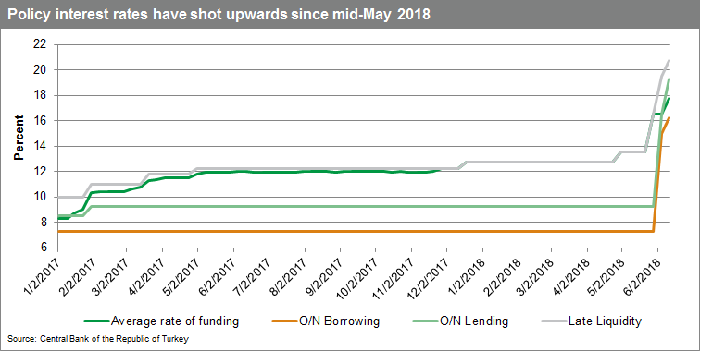 In between the two rate hikes, the TCMB significantly altered its interest rate mechanism to simplify and streamline monetary policy. Previously, the Bank had funded the market using a combination of several policy rates to maximize their flexibility in monetary policy. Investors and markets had long chafed at the complexity and unpredictability of the system. Moreover, inflationary pressures and the lira's fall had, de facto, taken away any flexibility as the Bank was forced into simply funding the market always at the highest rate possible, which pushed all financing through the late liquidity window. Effective 1 June, the one-week repo rate was more than doubled, from 8.0% to 16.5% -- at that point matching the prevailing late liquidity window rate - and funding resumed through this mechanism. All other rates reverted to their original uses, set dependent on the main policy rate.

The degree to which rates were raised at the June meeting was higher than expected, the incentive for the extra aggressiveness likely prompted by the disappointing inflation data released earlier that week. Annual consumer price growth was reported to have topped 12%, well above the TCMB's inflation target of 5%, with signs of further acceleration on the way. This elevated inflation rate re-triggered a lira sell-off. 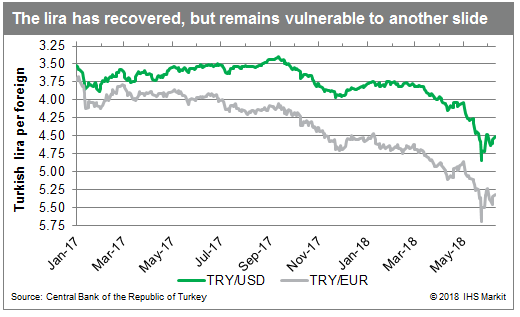 Combined, the two rate hikes sent the average funding rate of the market upwards by a total 425 basis points in a little over two weeks, a significant tightening. Another rate rise cannot be ruled out, particularly if inflation continues to accelerate. The question remains - as it had it been at the time of the May rate rise - of whether this action is too little and too late to provide the exchange rate and Turkish markets a semblance of stability that will last any length of time. While the actions may be strong enough, the timing remains too late to provide long-term stability. Examining current inflation and external accounts, in a vacuum, the aggressiveness of the Bank's actions over the past few weeks should be enough to stabilize markets. However, this newfound, brief period of independence of monetary policy may not be enough to reassure investors and markets that economic policy has broken from years of persistent centralization of power around President Recep Tayyip Erdoğan, his tampering in monetary policy, and offers a change in direction from his anti-interest rate lobby and populist policies.

Without another external shock, the lira may remain stable. However, the lira remains extremely vulnerable to destabilization, triggered by numerous potential external factors. Disappointing trade or inflation data, weak economic growth news, or a statement or action from the government that threatens independent monetary policy or raises concern regarding post-election economic policies are all potential triggers for another lira slide.