Turkey bows to the inevitable

It's the 10th anniversary of Lehman's collapse and we are being inundated with retrospectives and predictions of what will cause the next crisis. Many are pointing towards emerging markets as a likely catalyst, a logical conjecture given the tightening in monetary policy that is underway in the US.

Emerging market sovereigns are not homogeneous, though they are sometimes treated as such. Some have fiscal and external positions that would be the envy of many a developed country, while others are only one false step from a crisis and possible default. Turkey is generally regarded as belonging to the latter group thanks to a confluence of a weak external position, deteriorating relations with the US and misguided interventions in monetary policy from Turkey's President Erdogan. It's 5-year CDS spreads widened dramatically in response and approached 600bps last month, a worrying level for a sovereign that was trading as tight as 158bps in January.

But there was a modest recovery over the past week, driven by expectations that Turkey's central bank would finally deliver the rate hike demanded by the markets. So, it was interesting, though not altogether unsurprising to see Erdogan issue comments only hours before the monetary policy announcement that cast doubt on a rise in rates. Erdogan reiterated his well-know, if contrarian, view that there is a positive correlation between rates and inflation. Five-year CDS spreads widened from 509 bps to 535bps in reaction to the increased uncertainty.

But Erdogan also asserted the independence of the central bank, a stand that many would dispute considering this summer's events. Perhaps he would use this as cover for a climbdown and protect his reputation among the domestic electorate? This is certainly one interpretation, as hours later the central bank exceeded expectations by hiking rates from 17.75% to 24%. The decision was well-received in the credit markets, with bonds asset swap spreads falling and five-year CDS tightening to 455bps. Crucially, Turkey's credit curve also began to disinvert - the two-year spread is now trading just 30bps wider than the five-year compared to 80bps a week ago. 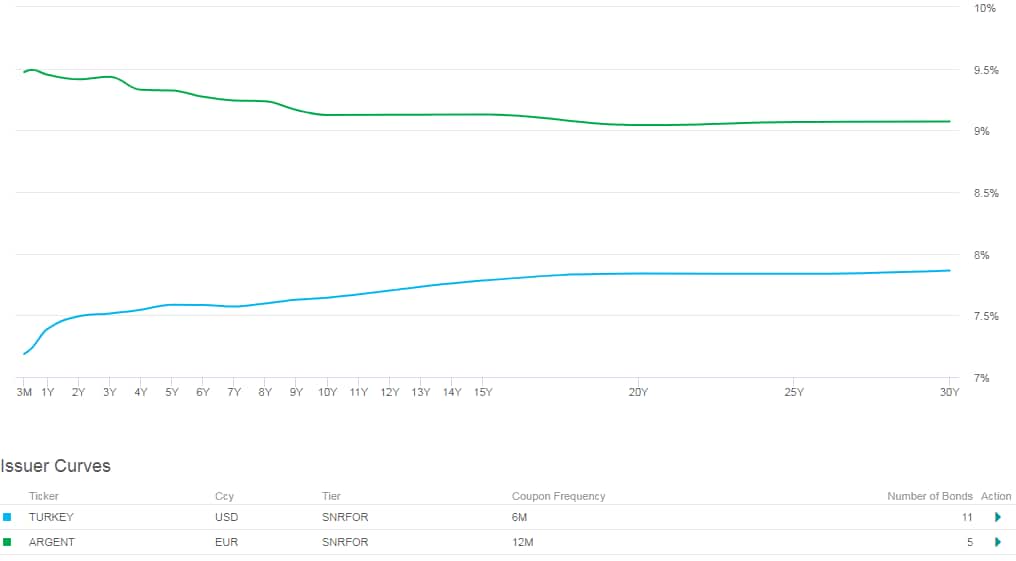 Turkey's bond yield curve disinverted further and has returned to a normal - though rather flat - shape. The comparison with Argentina - another emerging market name under pressure - is striking (chart and data from IHSM Price Viewer). 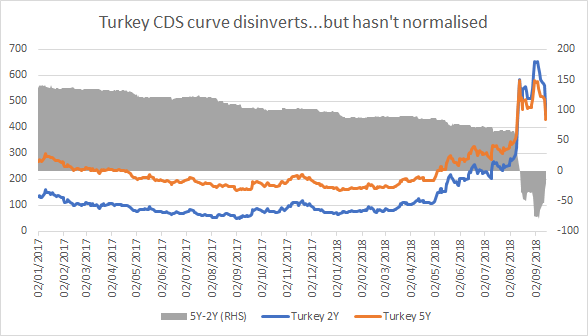 It's worth noting that the CDS curve is still inverted, indicating that Turkey is not out of the woods yet. One may wonder why the central bank didn't make this decision weeks ago, which would have curtailed much of the damage. The country is still forecast to slow-down sharply in the coming quarters, which will have an impact on its corporate sector - particularly credits with significant debt denominated in foreign currencies.

Even if Turkey does fade in to the background, there are plenty of other events to keep credit market participants occupied. As well as the index roll next week, there will be ongoing headline risk around Italy's upcoming budget as the government continues to triangulate between a domestic audience and external bond investors. Idiosyncratic risk on names such as Astaldi and Rallye, the name a few, also have the potential to cause volatility.