Tunisia's president, Kais Saied, activated article 80 of the Constitution on 25 July, suspending the activities of parliament and parliamentary immunity, and dismissing Prime Minister Hichem Mechichi. The move came during mass protests across Tunisia over the weekend, in response to consistent political deadlock, economic stagnation, and widely perceived mismanagement of the coronavirus disease 2019 (COVID-19) pandemic by the government-led by Mechici. There had been frequent large-scale protests since early 2021, which had intensified over the last three months.

President Saied is likely to attempt to exploit his interim authorities and seek to more permanently expand his powers beyond those assigned to the presidency by the constitution - namely over foreign policy and the military.

Following the suspension of parliament, Saied stated that he would govern with a new prime minister - yet to be appointed - and that parliament would remain suspended for at least 30 days. In response to endemic failings in Tunisia's COVID-19 response, Saied on 21 July had ordered the military to take over direct coordination of the pandemic response, and it is highly likely that Saied will seek to develop a more prominent role for the military in directing the Tunisian political system. His decision to suspend the Parliament also came after a meeting with senior military and security officers, indicating that the President had received the support of the security apparatus beforehand.

Such a campaign would indicate that political Islamist parties, including Ennahda - the party supportive of Hichem Mechichi and Parliamentary Speaker Rachid Ghannouchi -are likely to be targeted in the weeks ahead.

The Tunisian cabinet has been characterized by paralysis since early 2021, mainly due to increasing antagonism between the presidency and the prime minister's office and disagreement over the division of powers, and accusations of cabinet-level corruption.

Islamist and more leftist parties are likely to continue opposing Saied's decision and call for protests, especially if the president fails to appoint a new PM or call for fresh elections.

Immediately following Saied's televised announcement, Rachid Ghannouchi (who, besides being speaker of parliament, is a co-founder of the Ennahda party) claimed that Saied's actions amounted to a coup against Tunisian democracy; this was supported by the Karama and Heart of Tunisia parties. Ennahda, however, released a statement on 27 July calling for dialogue to resolve the political crisis and for fresh general elections, urging its supporters not to organize demonstrations outside the parliament building. This move was likely intended to avoid the risk of violent confrontation between presidential supporters or security forces that would risk escalating into more sustained violence, with a high likelihood of fatalities and societal polarization, which would further erode popular support for Ennahda. Should President Saied fail to appoint a new interim PM or not provide a clear roadmap that includes fresh elections, Ennahda is likely to call for mass protests and mobilize its support base, with a high probability of sustained violent altercations between supporters of both camps. In the lead-up to the suspension of parliament, protesters stormed and vandalized party offices, in particular those of Ennahda, directing anger towards a party they largely see as part of the current political system's dysfunction and a prime minister considered incapable of dealing with the economic and health crisis. 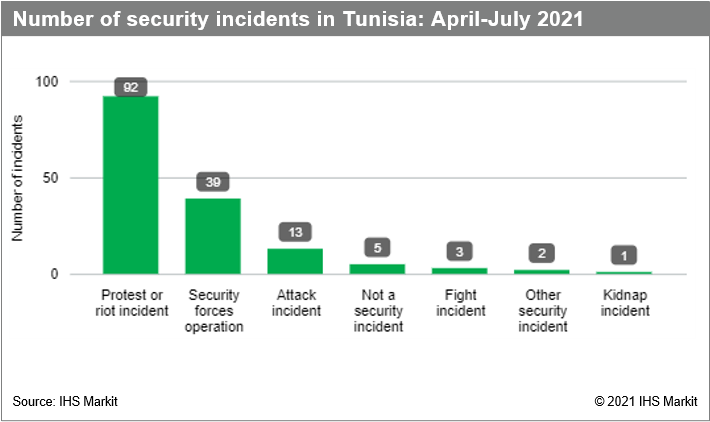 The suspension of parliament and reconfiguration of governmental decision-making will further delay talks with the International Monetary Fund (IMF).

The Tunisian government started negotiations with the IMF on 21 May 2021, aiming to secure a new USD4-billion financial assistance package over three years to assist in coping with growing economic stress, exacerbated by the pandemic. The new package will depend on Tunisia's willingness and ability to implement those reforms. However, should Saied seek to establish a more directly executive system of governance with the backing of military support, the likelihood of an arrangement being agreed with the IMF within the year would decrease.