Americans are likely to spend billions of dollars on Halloween candy, costumes, and other types of creepy-crawly commodities this year. Spending on Halloween candy is expected to increase by 4.1% this October, not as strong a showing as last year's ghostbuster rate of 5.4% but still respectable. We expect Halloween candy spending to reach $4.1 billion this year, or $32.60 per (haunted) household.

Halloween prices were very scary between 2005 and 2011, creeping up at a formidable pace of more than 2% each year. Between 2012 and 2014, Halloween candy price inflation floated in the -0.9% to 0.8% range, but it was jolted back to life in 2015 as global raw sugar and refined sugar beet prices and US cocoa powder prices rose. In 2015, Halloween candy prices increased 3.8% on a year-over-year basis. 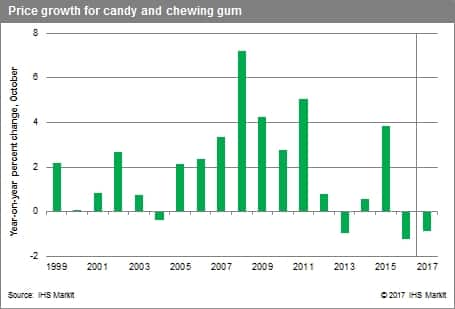 This year's Halloween prices will not be scary. IHS Markit is forecasting 2017 Halloween candy prices to drop 0.9% compared to last year, in the second Halloween candy price drop in a row. Global cocoa production in both 2016 and 2017 experienced large improvements over each previous year with especially good, and in some cases record, production from major producers in West Africa. This created downward pressure on cocoa bean prices in 2017. For example, the September cocoa bean price fell by nearly 1/3 from its September 2016 level, with cocoa derivative prices (e.g. cocoa paste, cocoa butter and cocoa powder) also softening in 2017 - making it easier to add more chocolate to the kids' treat bags this Halloween.

The usual trick for getting even less pricey treats is to hold out until this Wednesday (November 1st) when many grocery stores are likely to slash candy prices even further. 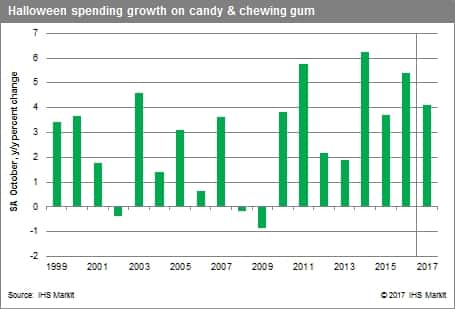 So: Trick or Treat? This year, the cost of a treat is considerably cheaper than a trick - implying higher demand for treats than tricks. Consumer confidence is riding high, so consumers are likely to splurge a little more on edible goodies. Treats have been outpacing tricks for many years, and according to our extensive research on the ground, many Trick or Treaters are not being very earnest with their customary declaration "Trick or Treat".

Increasing push factors are driving irregular #migration of Mexican nationals into the U.S. See what effects this m… https://t.co/8pBnUX0wLu

ICYMI: Here's the scoop on the dip in our Markit Materials Price Index: https://t.co/W3bZthG4V7 #commoditymarkets… https://t.co/WKv4elDvCz

Thanks for mentioning @SPGlobalPMI! Business Activity in US Falters as Inflationary Toll Mounts https://t.co/h45Jo2p430 via @markets