Trade-weighted euro at highest level since 2009

Which matters most, the EUR/USD rate or the effective euro?

Both are relevant. The US dollar has the second highest weight in the ECB's broad nominal effective exchange rate (discussed below). Moreover, given the number of currencies across the globe which are pegged in some way to the dollar, a rise in the EUR/USD rate also means an appreciation of the euro against a range of other currencies too.

That said, when it comes to gauging the impact of exchange rate movements on the eurozone economy, the effective, or trade-weighted, euro is the most important metric. It captures the euro's movements against all the currencies of the eurozone's most important trading partners, with those changes weighted according to their relative significance to eurozone trade.

Why do we focus on the ECB's measures of the effective euro exchange rate?

First, the evolution of the exchange rate will be a key influence on growth and inflation prospects which, in turn, will determine monetary policy developments and the ECB will pay most attention to its own measures. Second, the weights the ECB uses to calculate the effective euro are updated relatively frequently: i.e. every three years. The last revision was completed in 2017, based on trade data for the period from 2013 to 2015.

The measure we typically focus on is the ECB's broad nominal effective euro, calculated against the eurozone's most important 38 trading partners (known as the NEER-38). It is updated at the end of each calendar month.

Is there a stable relationship between EUR/USD and the effective euro exchange rate?

There used to be, as Chart 1 illustrates, with a ratio of roughly 2:1. But Chart 1 also shows that the relationship has become less stable since early 2015. This can be largely attributed to three factors. 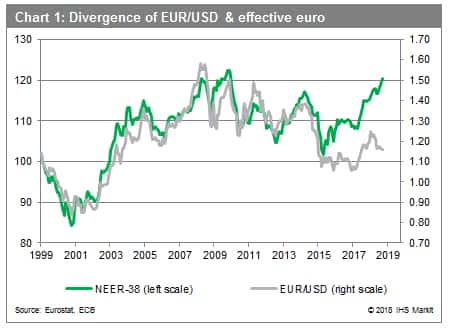 In Chart 2, we show the contributions of each of the ten highest weighted currencies in the NEER-38 to its net appreciation between April 2015 and September this year. (The currencies are ranked in descending order based on their current weights in the NEER-38.) 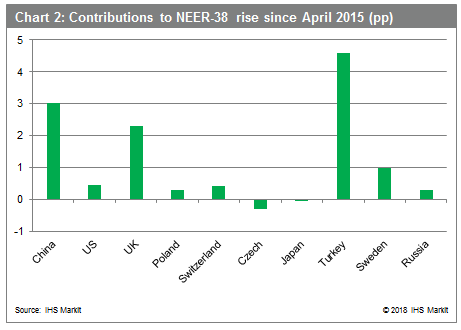 Are changes in trade weights significant?

Yes. One of the key factors contributing to the relative strength of the effective euro exchange rate is the increased importance of emerging markets. This reflects changing patterns of trade. 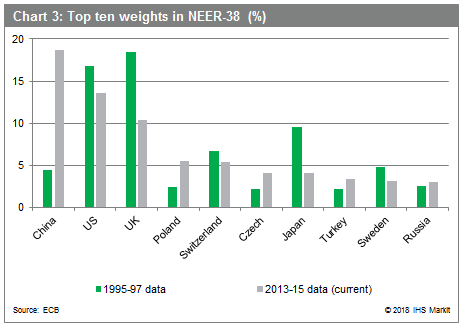 The standout feature is the huge increase in China's weight, to almost 19% of the NEER-38 currently versus just 5% in the late 1990s. Emerging markets in general are much more important than they were, including the economies of central and eastern Europe. The US and UK rank second and third, respectively. Their weights having fallen but combined, they still account for around a quarter of the NEER-38 overall.

How much of a concern is the strength of the effective euro?

The NEER-38 has risen to its highest level since autumn 2009 and is currently around 17% above its long-run average. We incorporate the NEER-38 into our own eurozone export forecasting model, which has a good fit with actual export volume growth (Chart 4). The model predicts a continuation of the slowdown in export growth (shown in the red "estimate" line) even if we assume that the NEER-38 does not appreciate further.

The full impact of exchange rate appreciation comes through with a lag of three quarters, so the recent rise in the NEER-38 will continue to lean down on eurozone export growth until at least mid-2019. This, in turn, will dampen business confidence, corporate profits and investment, continuing the moderation in eurozone growth evident over recent quarters. 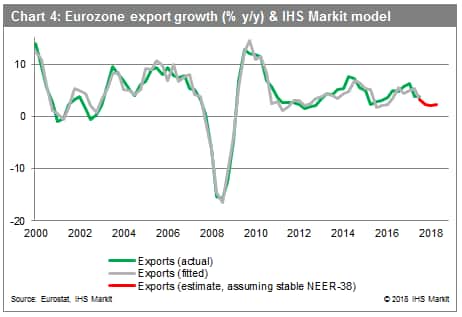