With the imposition, in early 2018, of tariffs on imported solar panels, washing machines, steel, and aluminum, uncertainty about trade policy has risen sharply. Aggravating this uncertainty more recently has been an escalating trade dispute with China as well as threatened tariffs on imported motor vehicles and all imports from Mexico. The latter tariffs were quickly called off, and a decision about tariffs on imported motor vehicles has been delayed until mid-November, but the angst remains and the trade dispute with China continues. We have found evidence in support of both anecdotal reports and other research that increases in trade policy uncertainty do, in fact, weigh on capital expansion.

These effects, moreover, appear to be limited to the manufacturing sector, a sector whose production processes and selling markets are uniquely exposed to trade and, hence, to the potential detrimental effects of tariffs and counter-tariffs. In 2017, imported goods accounted for 19% of total intermediate inputs in the manufacturing sector, and exports accounted for 16% of manufactured commodity output, implying a trade-exposure value of 0.35. The next highest trade-exposure values were in agriculture, forestry, fishing and hunting (0.19) and in mining (0.21). Most other industries had values well below 0.10. 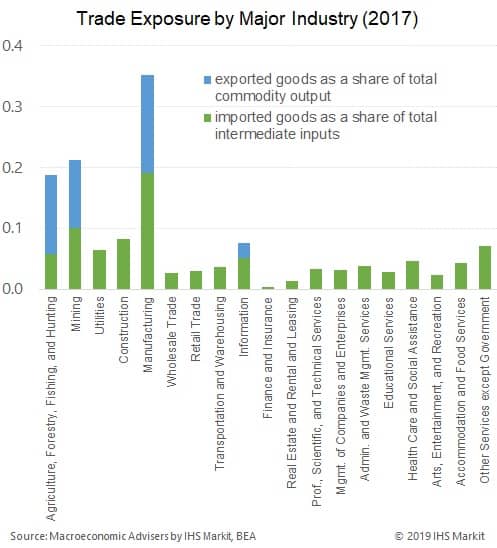 The increase in trade policy uncertainty from 2017 to 2018 — a period that saw the imposition of new tariffs on solar panels, washing machines, aluminum, steel, and imported goods from China — is estimated to have reduced year-over-year real GDP growth by 0.2 percentage point. For this year so far little has changed from last year, implying roughly no contribution, positive or negative, to 2019 GDP growth. And, finally, given that increases in trade policy uncertainty have been weighing on capital expansion for a few years now, a return to pre-2015 levels has the potential to boost real GDP growth by (possibly) one-to two-tenths per year for a few years, depending on whether and how quickly trade policy uncertainty returns to pre-2015 levels.