As the COVID-19 pandemic prolongs and its impact is visible on the increasing number of economies and particular industry sectors all over the world, it has also brought attention to pharmaceuticals and medical instruments market and the trade flow of these commodities.

This report is focusing especially on global exports and imports of two selected IHS Markit GTA Forecasting commodities: pharmaceutical goods and medical instruments, appliances and diagnostic apparatus, which are based on international HS 4-digit classification. Detailed descriptions, as well as included HS4 codes, are provided in the reference tables at the bottom of the page.

The trade of pharmaceutical goods accounted for 3.2% of total world merchandise trade in 2019 and according to GTA Forecasting estimations, the top five exporters of these goods were Germany, Switzerland, Ireland, United States, and the Netherlands. Germany exports amounted to 98.4 billion USD, which represented 15.9 % of global pharmaceutical goods exports in 2019. The leader's main trade partners were the United States, Netherlands, and Switzerland, accounting for 16.5 %, 11.8 % and 8.5 % of total Germany pharmaceuticals exports, respectively. Germany was far ahead of any other exporter in this market, with Switzerland and Ireland, each making up over 10% of total world pharmaceuticals exports.

As far as medical instruments, appliances, and diagnostic apparatus are concerned, the export leader in 2019, according to GTA Forecasting estimates, was the United States, with the value of exports accounting for USD 46.2 billion, and followed by Germany, China (mainland), the Netherlands and Mexico. In 2019, the US represented 19.6% of the global export value, while Germany and China made up 12.6 % and 7.5%, respectively. The US main trade partners in 2019 were Netherlands, Japan and China (mainland), with a share of 12.8%, 10.2% and 9.9% of its total medical products export.

The unquestionable leader in pharmaceuticals imports in 2019 was the United States, representing 19.7% of global imports. The country imports reached USD 122 billion and increased by 6.8% in comparison to the year 2018. The top of the ranking includes also Germany, Netherlands, Belgium and United Kingdom with shares in global pharmaceutical goods imports reaching 8.7%, 6.0%, 5.2%, and 5.1%, respectively.

United States was also the main importer of medical instruments, appliances, and diagnostic apparatus, with import value reaching USD 50.2 billion USD, in this case making up 21.3% of the total imports in the market, according to GTA Forecasting. The country was followed by the Netherlands, Germany, China (mainland) and Japan. The largest year on year growth in 2019 was noted, however, for China (mainland) and it reached 8.0%, followed by US (7.5%) and Japan (2.8%). Germany and the Netherlands marked an increase of 1.9% and 1.3%, respectively.

The situation and prospects for 2020

Due to the spread of the COVID-19 pandemic at the beginning of 2020, the governments of affected countries need to take protective measures and provide specialized medical equipment and apparatus to their healthcare institutions. We are not able to see the impact on trade flows data for most of the European countries yet, as in the region the pandemic spread took place mostly in March 2020 and the official data come in with a delay.

However, when it comes to China, we can analyze the IHS Markit Global Trade Atlas data for the first two months of 2020, which can serve as an example of market behavior. The data are reported by China for January and February in a cumulative form, nevertheless, we can compare it to the corresponding period of 2019 and it is interesting to see that although in general imports of the medical equipment and apparatus noted a decline of 4.4% (Jan-Feb 2020/Jan-Feb 2019), imports of particular products soared. Looking at the HS-4digit level commodities, an extremely high increase has been noted in China's import value for the commodities including the respiration apparatus (HS code 9019) as well as breathing appliances and gas masks having mechanical parts and/or replaceable filters (HS code 9020). The spikes reached 74.3% and 33.8%, respectively (Jan-Feb 2020/Jan-Feb 2019).

Taking under consideration the situation of China as a manufacturing hub and the largest exporter of goods to the world, the COVID-19 brought a huge negative impact on China exports value in general, still in the medical instruments, appliances and diagnostic apparatus we can observe a drop of only 3.5% (Jan-Feb 2020/Jan-Feb 2019).

From the producers' perspective, on the other hand, we know that the coronavirus has also led to a massive shutdown of plants across multiple industrial sectors, one of which is the automotive industry. The automakers across the US and Europe have declared temporary plant closures to slow the virus spreading. According to the latest news provided by Reuters, Ford, GE, and 3M have joined their forces and switch their production lines to ventilators and respirators needed for coronavirus infected patients all over the world. Their partnership has been called "Project Apollo" after the Apollo 13 mission, during which an oxygen tank failed forcing the astronauts to make a quick fix to land safely. The Chief Executive of Ford states that the automotive industry will be able to produce hundreds of thousands of ventilators by early to mid-May 2020. Some of the European automotive plants may also adjust their production lines, as Ford is already holding discussions with the British government.

As the production of medical equipment starts to soar across automotive plants in the US and Europe, then there is a possibility that we would observe significant changes in medical equipment trade flows during the coming months of 2020. 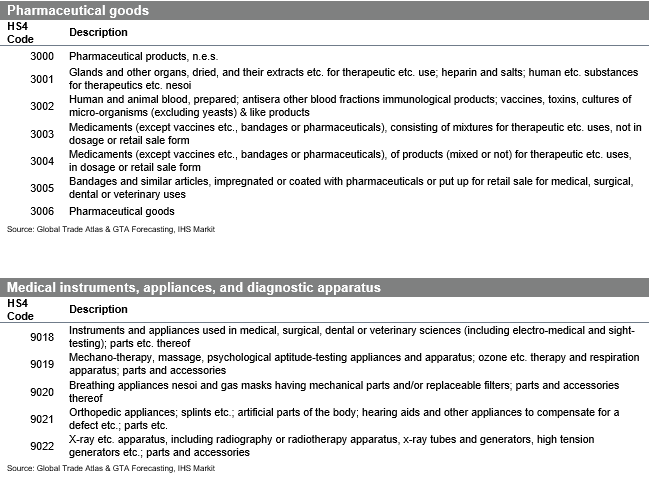