In November 2019, the federal government released the National Hydrogen Strategy, which has since solidified as the foundation for the development of Australia's hydrogen industry. The main goal of the strategy is for Australia to become a global supplier of clean hydrogen by 2030 through coordinating and facilitating actions across government, industry, and communities. Government policy and support mechanisms will help prioritize hydrogen in Australia's energy-related investments, with over A$1 billion allocated to more than 50 hydrogen-related projects since 2017.

IHS Markit is tracking more than 120 hydrogen-related projects and 30 economic development zones committed to establishing a domestic market that will enable Australia to be competitive in the global market. The federal government maintains a technology neutral support to the production of clean hydrogen including coal gasification with carbon capture and storage (CCS), steam methane reforming with CCS, and electrolysis. Electrolysis currently dominates Australia's hydrogen production project pipeline with more than 80 GWe of announced capacity, representing 24% of the global power to X project pipeline.

The formation of the domestic market is focused on the development of regional hydrogen hubs that aim to centralize infrastructure and market expertise. Investigation into the integration of hydrogen into the natural gas network is underway with 13 projects in the pipeline, three of which are in operation. Projects in the transportation and power sectors are in advanced stages of development with construction commencing at the Tallawarra B hydrogen-ready power plant in February 2022. 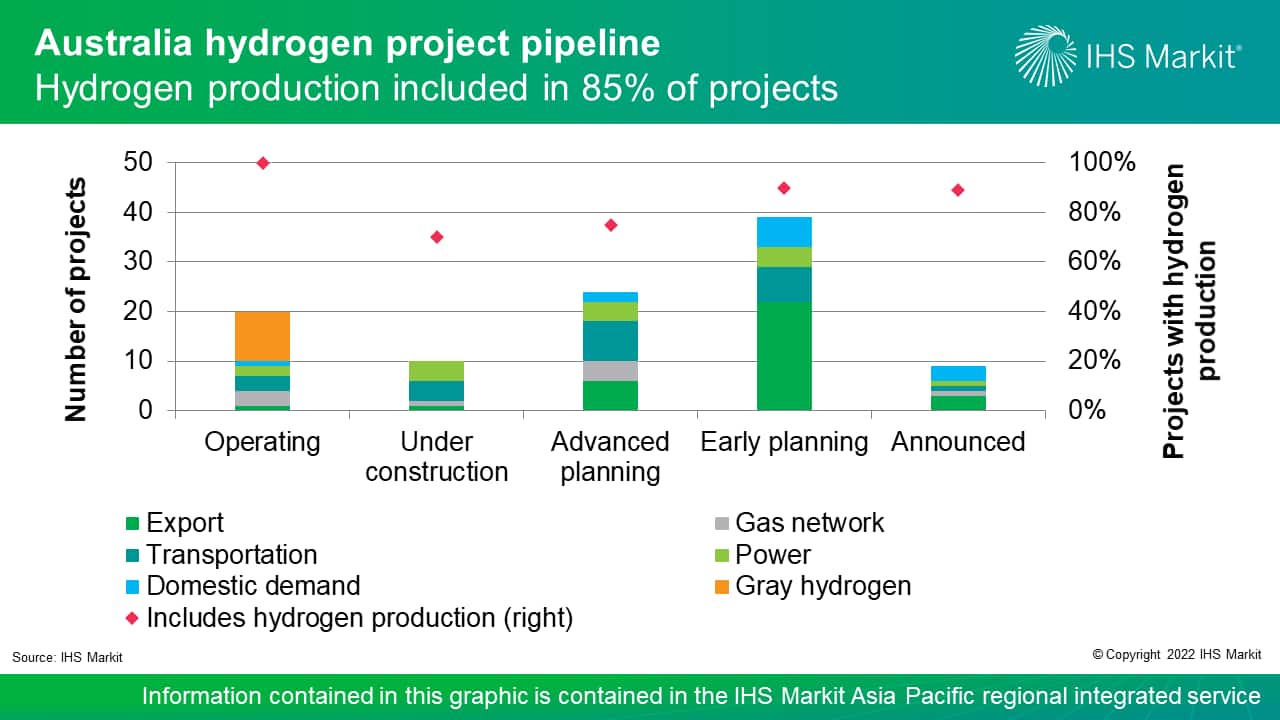 Internationally agreed upon definitions and standards are a major barrier to the global hydrogen trade. A proposed approach to the design of an Australian hydrogen Guarantee of Origin (GO) certification scheme was released in June 2021, with trials commencing in December 2021. The Clean Energy Regulator will invite industry stakeholders with projects that are either operating or in an advanced stage of planning to participate in an 18-month trial that will inform the design of the scheme. The GO scheme will align with internationally agreed upon definitions and standards, facilitating the certification of hydrogen produced in Australia by quantifying its carbon intensity for the purpose of providing transparency to international markets.

State and federal governments are setting the foundations for Australia to become a major hydrogen exporter by fostering relationships with the global community to collaborate on policy, regulation, and technology. Since November 2021, Australia has committed A$50 million and A$150 million that builds upon announced partnerships with South Korea and Japan, respectively, while the Port of Rotterdam signed a memorandum of understanding with Western Australia and Tasmania on opportunities for knowledge sharing and to investigate the feasibility of hydrogen exports.

Australia's abundant resources are fuelling the momentum in Australia's hydrogen industry that has garnered broad support across the political spectrum. However, the outcome of the federal elections in May 2022 could refine the governments backing of the hydrogen production pathway with the opposition party focusing on electrolysis, counter to the technology-neutral approach of the ruling coalition. Independent of election results, there is likely to be an evolution in Australia's hydrogen project pipeline from announcements and feasibility studies to demonstration projects and final investment decisions.

Learn more about our coverage of Asia Pacific hydrogen research through our Asia-Pacific Regional Integrated Service.

Logan Reese is an associate director on our Asia Pacific Regional Integrated team, focusing on Australia power and gas markets.