Too early to declare victory in war on high oil stocks

The move by OPEC and certain non-OPEC countries to reduce oil supply, by 1.8 MMb/d starting in January 2017, is making inroads in shrinking global oil stocks. However, a declaration of mission accomplished is premature-especially since the third quarter typically records a seasonal decline in stocks. IHS Markit balances suggest that OECD commercial oil stocks are unlikely to return to the five-year average until around the end of 2019. Therefore, the pressure will remain on OPEC to keep the production restraint in place for a far longer period than was originally planned in late 2016.

From the start of 2014 through to the storage peak in mid-2016, the oil supply glut and accompanying contango price structure-with future prices higher than near-term prices-fueled a global oil stock build of almost 1 billion barrels, including about 350 million barrels added to government-controlled strategic inventories. Since mid-2016, global oil stocks have declined slightly but still remain high. 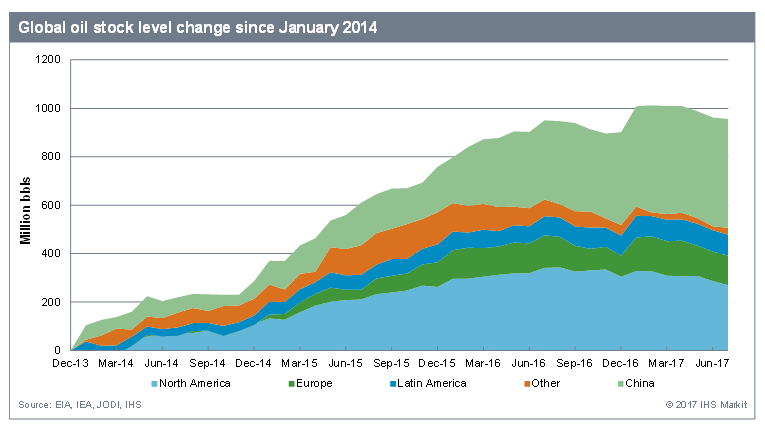 At the November 2016 OPEC meeting, OPEC and some non-OPEC countries, in a historic decision, stepped back into a market balancer role, pledging to reduce their combined production by about 1.8 MMb/d. OPEC announced that the primary purpose of the supply cuts was to "accelerate the ongoing drawdown of the stock overhang."

In mid-2017, on behalf of OPEC, the Saudi oil minister, Khalid A. Al-Falih, said, "Our joint declaration with Russia concluded that while the rebalancing goal is on its way to being achieved, more needed to be done to draw inventories towards the five-year average."

To be sure, ultimately, OPEC and other producers want to bring about higher prices, and they have indicated that the OECD commercial/industry oil stock five-year average is the target. Commercial oil stocks have fallen by about 50 MMbbl in 2017 but remain 150-200 MMbbl above the five-year average. 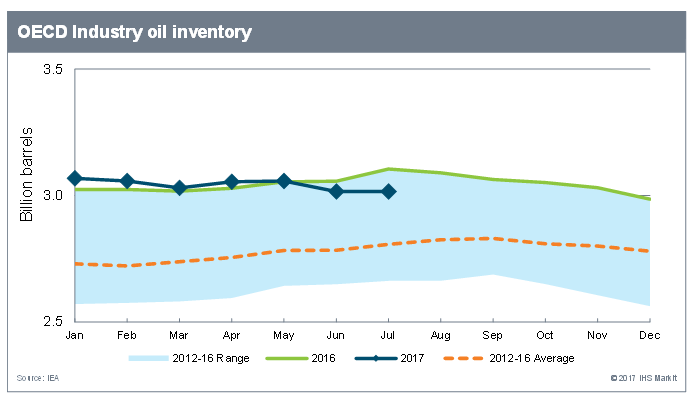 Our expectation is that global oil inventories will resume growth in 2018, increasing by 100 MMbbl through 2018-19. However, most of these builds may be in strategic stocks and so some reduction in commercial oil stocks may still happen. Even so, getting commercial inventories down to the five-year average remains a significant challenge unlikely to be achieved in 2018.

This blog is a summary of a detailed report published on the IHS Markit Crude Oil Markets service. Learn more by contacting the author, Spencer Welch at spencer.welch@ihsmarkit.com.

Spencer Welch is Director, Oil Markets and Downstream in IHS Markit based in London.
Posted 2 November 2017