China is currently going through one of the most significant power outages in a decade. By September 28, 22 provinces have experienced different degrees of load shedding measures. For a nation that has largely maintained power supply security during two decades of robust growth, it is astonishing to see that nearly two-thirds of the country are suffering from power shortage - and not during summer or winter peak demand seasons.

So far 12 provinces have identified coal supply shortage as the key reason behind for power rationing or rolling blackouts. In the three provinces in northeast China—Liaoning, Jilin and Heilongjiang, in particular, even residential power usage is affected, a rare occurrence for a country putting household energy supply in a prioritized category. For most provinces, industrial power rationing remains the key measure. 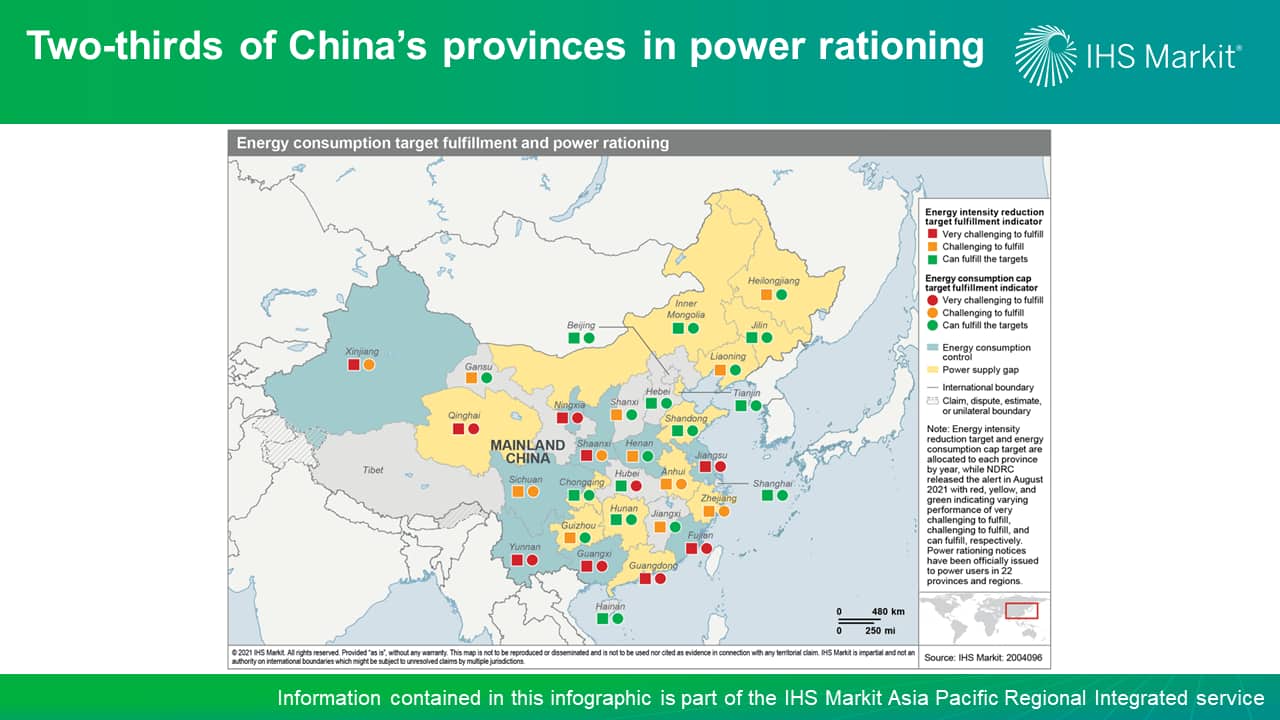 For these 12 provinces, shortfall in coal-fired power generation - stemming from fuel shortage and skyrocketing coal prices - is a chief cause for power outages.

By September 2021, thermal coal price is reported to have tripled from a year ago. Meanwhile, policymakers have demanded coal-fired power tariff to remain on par with on-grid benchmarks, which were calculated during much lower coal price periods.

Although policy change a few days ago approved 10% increase from the local benchmark power price in a number of provinces, this price hike will only have marginally reduce the losses made by coal-fired power generators. This disconnect between market-based coal prices and tightly regulated power prices has led to power supply disruptions in the past, especially when coal prices were high.

A series of supply shocks are attributable to the coal price surge. Domestic coal supply disruption started from the anti-corruption campaign in Inner Mongolia last year, followed by a few rounds of heightened safety inspections and environmental checks.

In addition, under new production regulations, it is now illegal for coal miners to produce beyond their approved nameplate capacity - a practice that had been allowed previously. Coal imports have also been weakened by floods in Indonesia, the import sanction on Australia, as well as new Covid-19 outbreaks in Mongolia.

It is challenging for gas to ramp up to fill the gap for coal-fired power, given the low share of gas in the capacity mix and the high fuel costs. Gas accounts for 4% of the total power generation capacity nationwide, compared with 49% for coal. Even in the province with the largest gas-fired power fleet—in Guangdong, gas represents 20% of the capacity mix as opposed to 46% for coal. Going to the spot LNG market to procure additional supply for incremental gas-fired power generation also means even a heavier loss than that by coal-fired power at the current fuel price levels.

Liaoning's official remark seems to provide an alternative explanation. Wind power was blamed as the root cause of rolling blackouts for residential power users during September 23-25. However, compared with local thermal power and electricity imports from other provinces, which accounts for 59% and 15% in total power supply, respectively, wind power plays a much smaller role with a share of less than 8%. Moreover, before the unscheduled rolling blackouts, Liaoning already applied scheduled power rationing to industrial users for nearly two weeks, triggered by an abrupt decline of imported thermal power from Inner Mongolia, its neighboring province which is also experiencing power shortage. By nature, wind power as a variable renewable power source, is rarely considered dependable capacity or flexible peaking source in dispatch planning.

However, stronger-than-expected industrial recovery from the pandemic combined with heatwaves in some regions drove China's power demand growth to 10-year high to 17% during the first half of the 2021.

As a result, more than two-thirds of China's provinces missed at least one of their respective "dual control" targets during the first half of 2021, according to an alert released by the National Development and Reform Committee (NDRC) in August 2021. This was less than a year after the President Xi Jinping made major pledges at the United Nations and a few months before COP26 in Glasgow.

How long will the electricity crunch last and will it recur in the longer term?

The "dual-control" measures have been and will continue to be a sustained policy for China to meet its climate goals and to help with its economic restructuring towards new sectors that are less energy intensive.

Although we don't expect the strict and sudden power rationing, driven by dual-control measures, to go beyond the end of 2021, the investment in energy-intensive and emission-intensive industries will likely be curbed nationwide in the long run, in line with China's decarbonization ambitions.

The government's drive to boost domestic coal production aims to gradually improve supply in the next few months, though any incremental production will most likely fail to match the increased winter coal demand. Additionally, an uptick in mine safety inspections ahead of the Beijing Winter Olympics have the potential to result in even further supply disruptions. Demand for coal is set to rapidly grow in the upcoming weeks as Northeastern Chinese heating season begins on October 15th followed by the rest of Northern China on November 15th.

Therefore, the current coal shortage and power supply gap is expected to persist and likely worsen. This will also exacerbate power plants' current restocking difficulties. Coastal power plants are already struggling to maintain ten days of coal supply compared with an average of eighteen days coal supply during the same period in 2020.

Even as the fuel shortage problem is resolved, power shortage risk remains in the mid-term. China's power demand still rising while the load becoming peakier, strict restrictions on coal fleet expansion and rapid growth of intermittent renewables further decrease system reliability. This will make firm and flexible power sources more valuable in the system, creating potential opportunities for flexible generation resources such as gas-fired power and energy storage, but how fast both can scale up in the next few years remains to be seen given the profitability uncertainty.

Learn more about our Asia Pacific energy research with a climate and sustainability focus.

Chengyao Peng is a director at IHS Markit and a member of the thought leadership group in global power and renewables, with a focus on Asia Pacific and China, in particular.

Choon Kiat William Chia is a research analyst with the Greater China power and renewables team at IHS Markit.