Growth in the Sub-Saharan region was quelled at the end of the first quarter of 2022, as a record increase in selling prices led customers to rein in their spending in an effort to conserve cash flow. Businesses were also hit by a sharp rise in input costs as energy and material prices soared amid the outbreak of war in Ukraine, whilst renewed lockdowns in Asia began to hinder supply at companies relying on imports from the region.

The S&P Global Sub-Saharan Africa PMI - a weighted-aggregate index combining PMI data from seven countries - posted at 52.3 in March, remaining above the 50.0 neutral mark. However, this followed the index reaching a 44-month high of 53.8 in February in response to a loosening of COVID-19 restrictions after the Omicron wave of the pandemic.

Regional output levels rose at the softest pace in five months during March, as firms faced a myriad of headwinds to growth. One of these was the impact of a severe rise in global energy and commodity prices linked to the Russia-Ukraine war, which drove business expenses and output prices higher. The result was a marked slowdown in sales growth and a weaker demand performance in all seven monitored nations, as surveyed firms often mentioned that consumers had tightened their budgets over fears of cash shortages and economic hardship.

Even amidst this, output levels ran below new order inflows in March as firms themselves battled with higher operating costs and a reigniting of supply constraints. This included increased delays in the supply of inputs from Asia due to strict lockdown measures in the region, hitting companies that oft rely on these imports. The gap between output and orders was the largest seen for five months and reflected the trend seen throughout much of 2021 during the worst of the pandemic-led supply chain crisis. 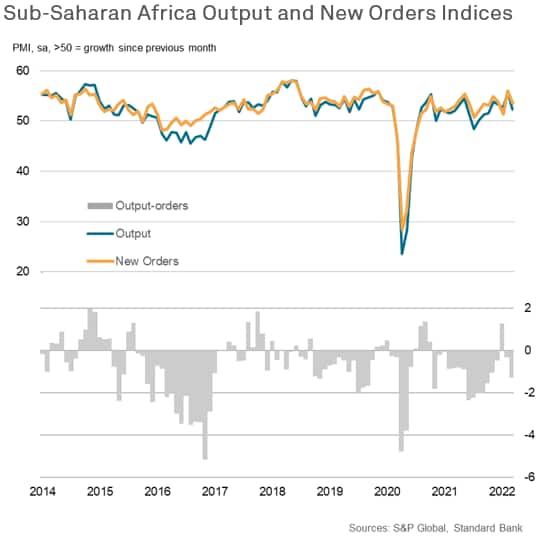 Of the seven monitored Sub-Saharan African countries, six recorded a drop in their output index during March, with four now registering an outright decline. This included Ghana which saw the steepest decrease in business activity for almost two years. By contrast, Nigeria and Uganda both registered strong expansions in output, but even here rates of growth were far slower than in February. 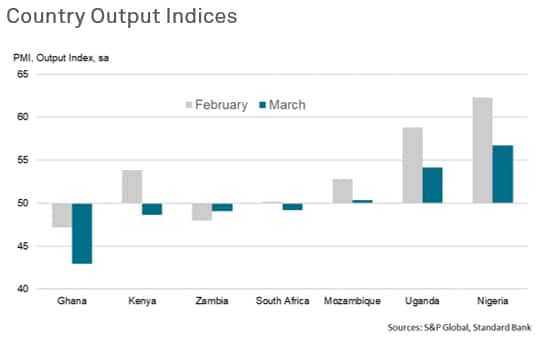 Illustrating the marked rise in inflationary pressures across Sub-Saharan Africa, the Output Charges Index increased to its highest-ever level in March (since data began in January 2014), signalling an unprecedented uptick in selling prices at private sector companies. The rate of input cost inflation was also marked and close to a record high, building on already-severe price increases seen during the latter stages of the pandemic.

Combined, the two price indices suggested that businesses widely passed cost rises onto their customers during March, as many commented on an unwillingness to take a hit to their margins with operating conditions remaining challenging. This was clearer in countries such as Nigeria and Ghana, where output charges rose rapidly and to a greater extent than input prices.

Anecdotal evidence amplified the fact that input costs were widely driven by underlining price increases in March, rather than other common factors such as component demand. Energy prices were a particular concern - related panel comments were nearly eight times the usual level - as the war in Ukraine led to a surge in fuel prices and transportation costs across the region. This had a knock-on effect on shipping: mentions of higher freight costs were also around eight times the long run average and above the previous record high in April 2021. Reports of higher raw material prices were roughly three times the usual amount, also a record high. 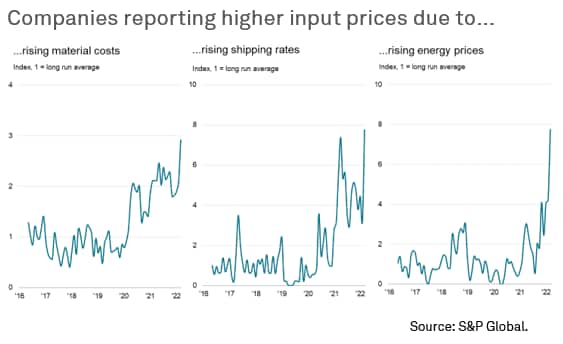 Despite these inflationary fears, Sub-Saharan businesses were often willing to look past the current slowdown in output and plan for a wider post-pandemic recovery in economic conditions over 2022.

While the Future Output Index slipped for the second month in a row from January's post-pandemic high in March, it was still largely in line with the upward trend seen since the middle of 2020. At the same time, the rate of job creation picked up to a nine-month high, as companies cited efforts to rebuild their capacity and develop new products.

However, there remains the potential for sentiment to turn sour if the demand slowdown continues and 'stagflation' beds itself in, so PMI data and global price indices will be crucial to watch over the coming months to gauge the true health of the Sub-Saharan economy. 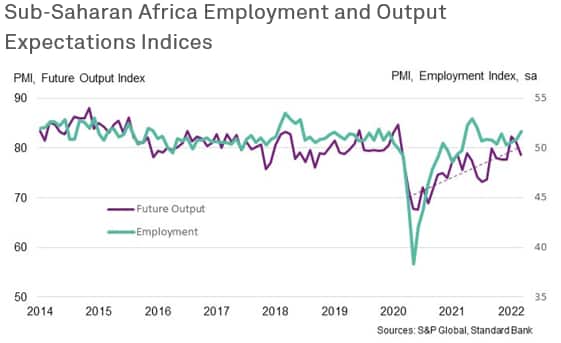