We’ve put together three significant energy related discoveries in 2017 which we think every energy fanatic should know about. Beginning with offshore discoveries in the Guyana Basin, then the recent gas discovery by PEMEX, the lxachi 1 in Mexico, and New Hope Corporation acquiring a 40% stake in the Bengalla thermal coal mine in New South Wales.

Discovery #1: Since 2015, five new discoveries have been made in the Guyana mini basin.

Five exciting discoveries in the Guyana mini basin since 2015 have resulted in the status of the Guyana offshore oil and gas exploration scene to boom. The 6.6 million acre Stabroek Block in the Guyana Basin is home to five significant discoveries in the last 3 years. Starting with the Liza, then the Liza Deep, Payara, Snoek and Turbot, the basin’s estimated recoverable oil reserves sit near 2.5 billion barrels.

Read the full article on the Guyana mini basin.

Mexican President Enrique Peña Nieto led a press conference at the Miguel Hidalgo refinery on November 3, 2017, announcing PEMEX’ successful efforts resulting in a historical gas discovery, the Ixachi 1. The Ixachi 1 asset is located within Block AE-0032 in the Veracruz Basin, among fields that contain declining to marginal conventional reserves.

While PEMEX announced that it aims to develop Ixachi 1 on its own, with an estimated development CAPEX of US$280 million US dollars for the first 5 years of the project, there are valid reasons to assume that PEMEX may want to bring in a strategic partner. The Ixachi 1 holds an estimated reserve size of 75 MMbbl condensate and 750 Bcf of gas. It is a good farm-in prospect with PEMEX already holding infrastructure and know-how in place, yet needing to share the technical and economic risks from drilling in Ixachi’s challenging high temperature and high pressure reservoir. 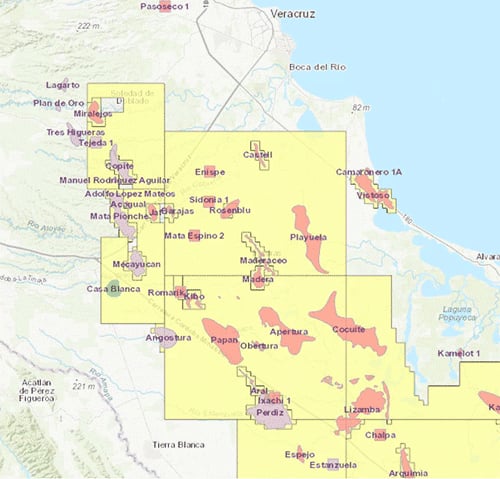 Read the details of the Ixachi 1 discovery.

New Hope Corporation returned a significantly improved financial result for the latest financial year ending 31 July, with a significant turnaround in profitability led by both volume growth and higher thermal coal pricing. In particular, the results reflect the first full year of production since the company acquired a 40% stake in the Bengalla thermal coal mine in New South Wales.

Read additional details on the Bengalla thermal coal mine.

Get the latest info and insights energy discoveries by following us on Twitter @IHSMarkitEnergy or on LinkedIn.