The latest reading of Germany's manufacturing PMI at 66.6 in March exceeded the previous all-time high in the 25-year history of the series by more than three points, merchandise exports have come close to pre-pandemic levels in February, and manufacturing orders have been recovering with almost no interruption since May 2020 and are now at their highest levels since December 2018. At the same time, service-sector PMI, which had enjoyed a brief phase of (above-50) expansionary readings in Q3 2020 before dropping back into contraction territory thereafter, only managed to edge modestly above 50 in March in reaction to some cautious loosening of pandemic-related restrictions. Furthermore, the gap with its manufacturing counterpart, the output sub-index, reached a record 17.4 points in March. As can be gleaned from the sectoral breakdown of the monthly Ifo business climate survey, the difference in sentiment between the manufacturing and the retail sector is even larger, despite a partial rebound of the latter in March when non-essential shops were at least opened up for visits by appointment (largely rescinded again in mid-April).

Meanwhile, alarmed by renewed exponential growth in new COVID-19 virus infections since early March (only interrupted briefly around Easter due to temporarily reduced testing and reporting) and dire warnings from epidemiologists about a looming overwhelming of the German healthcare system by May, the German federal government is launching a revised law on dealing with infectious diseases - planned to be passed by 23 April - that for the first time includes nightly curfews nationwide. This should be seen as the result of what Chancellor Merkel perceived to be an inadequate response from many regional authorities to the threat that has been created by virus mutations. The planned tightening of restrictions is linked to a 7-day incidence of new infections of 100 per 100,000 inhabitants, which has been greatly exceeded lately (nationwide average on 15 April: 160). Importantly, while the new measures essentially forbid all non-essential retail trade-in shops, most services (except those linked to physical or mental health), tourism, and recreational and cultural activities, industrial firms face no direct restriction on their economic activity. The only exception is a new obligation for all firms whose employees cannot work from home to offer weekly tests to those working on a company's premises. Furthermore, renewed general school closures once the incidence measure exceeds 200 would hit parents' availability for work in industrial facilities too.

What will be the consequences for Germany's economic recovery path in the months ahead? The good news is that the current strength of Chinese growth momentum and the fiscally supported rebound of the US economy (the two most important countries for German exporters currently) will continue to be significant sources of German growth throughout 2021, preventing any return to a recession in the second quarter or beyond. German manufacturing exports will hardly be hindered by these looming administrative restrictions, except possibly if indeed all pupils have to stay fully at home again. Exporters' main worry at present is rather the persistence of some supply chain problems, owing to shipping disruptions and a lack of computer chips.

The economic activity gap between the manufacturing sector, which greatly benefits from booming exports notably to non-EU countries, and services and retail sectors, which are hit much more directly by the negative impact of the looming new restrictions on both demand and supply, can only widen further in the weeks ahead.

The critical issue will be how long this tight lockdown situation needs to be maintained, as every additional week not only costs GDP during the quarter at hand but also raises the number of companies that - notwithstanding ongoing fiscal support - eventually will have to file for insolvency even after the pandemic is under control. This could be due to over-indebtedness or because business models no longer work out in a post-pandemic world in which consumer behaviors have changed.

The most likely scenario is that, following a phase probably lasting until end-May, the pandemic situation will improve again and that the outlook in June is helped by markedly accelerating vaccination. But, as shown by the Ifo chart below, this would not be the first time that expectations run half a year ahead of a sustained return to positive year-on-year GDP growth rates. 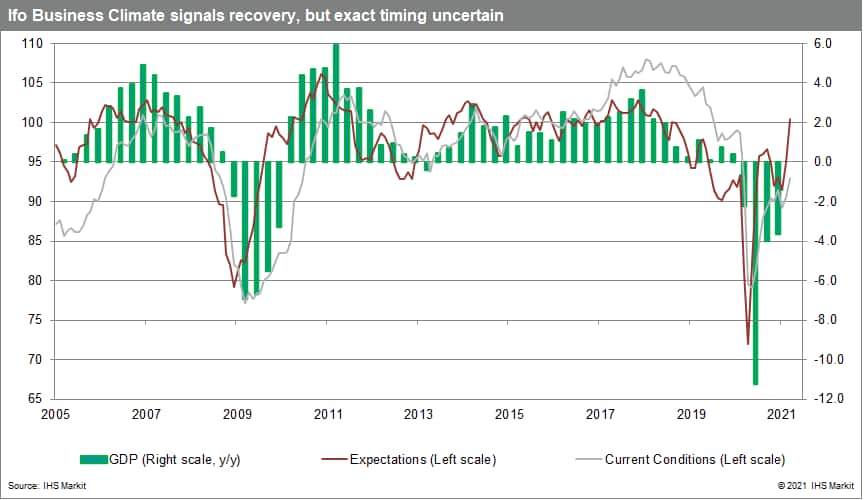