The introduction of 5G telecommunication services is going to be a game-changer for the automotive industry.

Its low latency properties will drive growth in connected and autonomous vehicle markets while enabling data and signal sharing in real-time, which is crucial for maintaining safety in the connected ecosystem. Another key factor is that the network will allow a larger number of devices to be connected at the same time in a more stable environment.

Use cases are still being defined for the 5G-equipped vehicle, but it is clear that one of the most important features will be V2X communication. By sharing data such as their position and speed to surrounding vehicles and infrastructure, V2X systems improve the awareness of drivers for upcoming potential dangers.

Once deployed with enough volume on the roads, they can dramatically improve collision avoidance, which could lead to lower fatalities and injury severity. V2X exists within two standards, dedicated short-range communication (DSRC) and cellular, the latter of which will leverage the 5G network.

Work is ongoing to determine what other features will follow, from advanced HD mapping and remote operation to video streaming and augmented reality (AR) applications. One of the long-term benefits of a higher bandwidth environment is the ability to offer more advanced and immersive services to customers, which will result in a more lucrative revenue stream for automakers and service providers alike. Indeed, 5G could be a critical key to unlock the full potential for data monetization of the connected car. 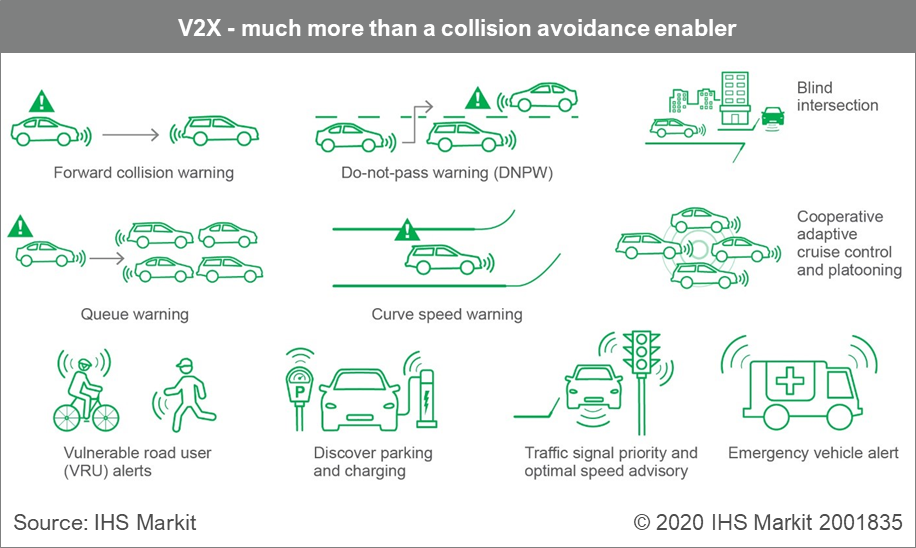 Automobile manufacturers have a 5G pipeline in place that includes vehicle launches in 2020/21. However, the delay in 3GPP directives for 5G - as well as the manufacturing problems due to the COVID-19 pandemic - could result in certain launches being postponed. The impact is predicted to last for over the next six years, with a slow recovery trend toward previously expected levels, largely owing to a recovery in underlying vehicle production. Production delays aside, a flurry of initial 5G launches are currently underway.

Greater China will lead the early deployment of 5G-capable vehicles, culminating from early support from the local government in infrastructure capabilities; advanced R&D from the local supply chain; and consumer appetite for the coming technology (both inside and outside of the vehicle). The fact that these vehicles will be exclusive to China's large domestic market further streamlines adoption because 5G infrastructure and standards are very likely to be standardized across the territory.

The following are the first four vehicles to launch with 5G capability that are limited to sales in Greater China:

Moving beyond Greater China, 2021 will also bring in the first global vehicle launch of a 5G-capable vehicle. The complication here becomes far greater, not only due to the cost of launching a global platform with an expensive 5G chipset, but by also ensuring its connectivity can be supported in the primary sales markets of that nameplate.

Beyond this, there are additional barriers when it comes to V2X including the DSRC versus cellular debate that is still ongoing at a country level. Launching a 5G-capable vehicle in a country supporting DSRC might be a questionable strategy early on when costs of deployment are at their peak. This is why the role of a mid-term hybrid V2X strategy is advantageous, despite it requiring more financial injection into vehicle platforms.

BMW iX (SOS: August 2021). The iX, which was previously known as the iNEXT in concept form, is expected to launch by the end of 2021. The fully electric vehicle is widely regarded as the world's first high-end consumer car with 5G, namely due to its global availability in all major regions. This would result in higher bandwidth and lower latency with swifter access to the BMW cloud. New 5G telematics components for the iX are being developed by Samsung's Harman unit, and relies on a built-in SIM card with a dedicated hybrid V2X module that can support either DSRC or cellular communication.

Unsurprisingly, releases from Audi, Volvo, Mercedes-Benz and other OEMs are expected to follow soon after the BMW iX release. While initial deployment is interesting, both in terms of SOS timing and understanding features will leverage 5G, of equal importance is the timeline for volume adoption of the 5G network. 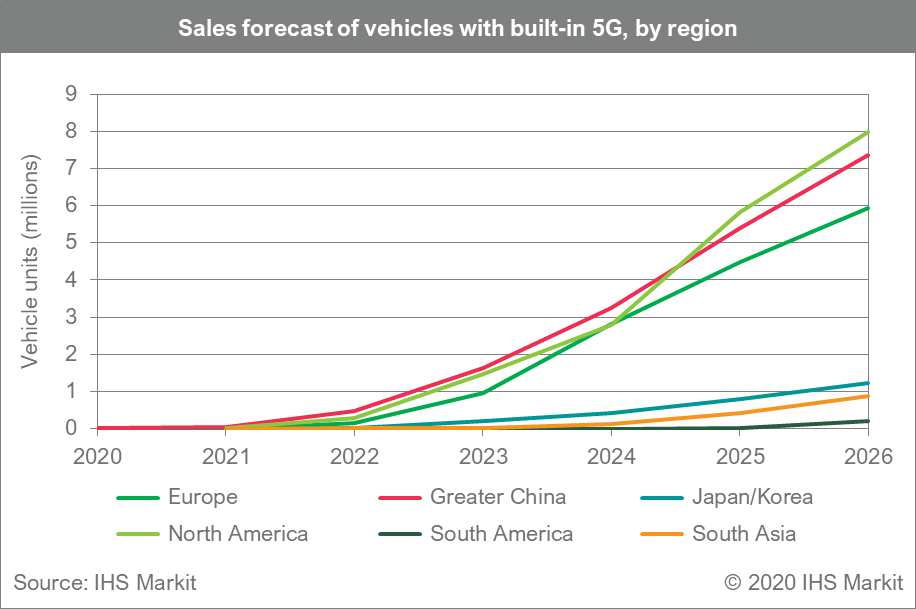 While the United States, China, and South Korea lead the way in 5G network deployment, nearly 200 European cities had ongoing 5G trials in March 2020 before the COVID-19 pandemic took hold, paving the way for rapid consumer availability in the coming years. Ford, for instance, has thought it more preferable to launch vehicles supporting cellular V2X from 2022.

Following that, though, a spike of more than 400% in vehicles sold supporting 5G is forecast to occur in 2023 compared to the year prior, reaching nearly five million vehicles globally. This represents the inflexion point of volume brands launching initial 5G-capable global platforms. Followers in the luxury and the full-EV market will be joined by the likes of General Motors, Volkswagen, Hyundai, and other mainstream volume players with flagship 5G nameplates. In total, 75 production brands are forecast to offer 5G-capable vehicles in 2023, up from only three in 2020.

Learn more about 5G impact on the Connected Car

Learn more about 5G impact on the Connected Car