Maintaining power grid reliability will be a major challenge in a deeply decarbonized future. The need to maintain reliability was a significant consideration in the construction of the recently released IHS Markit Fast Transition analysis, which explores deep decarbonization in the North American power sector while also taking major steps toward decarbonizing the broader economy through electrification.

IHS Markit's Fast Transition describes a pathway for achieving economy wide carbon emission reductions exceeding 70% in both the United States and Canada by 2050, and greater than 90% decarbonization in the power sectors. Several factors were included to maintain system reliability, including the perpetuation of significant natural gas-fired thermal capacity resources to help ensure reliability. Such an approach is sometimes viewed as being at odds with deep decarbonization objectives, but Fast Transition demonstrates that deep power sector decarbonization can be achieved even while natural gas-fired generators continue to operate at low capacity factors.

But longer term, seasonal misalignment of renewable supply with demand cannot be accomplished through these approaches alone. Technology that can carry a large energy inventory is needed. In Fast Transition, this act is accomplished by maintaining a fleet of natural gas-fired generators operating at a low capacity factor.

Our approach to reliability under Fast Transition results in more than 520 GW of gas-fired capacity remaining in the United States by 2050 and more than 30 GW in Canada. This installed natural gas-fired capacity is significant, and similar to today's installed capacity in gigawatt terms, but represents a much smaller proportion of total nominal capacity in 2050. However, the installed natural gas-fired generator fleet will not be used during most of the year. The output from natural gas-fired generators (including those with CCS) is about 11% and 3% of total generation in the United States and Canada, respectively, by 2050. Thermal generation will serve as a reliability resource in the future Fast Transition power system. 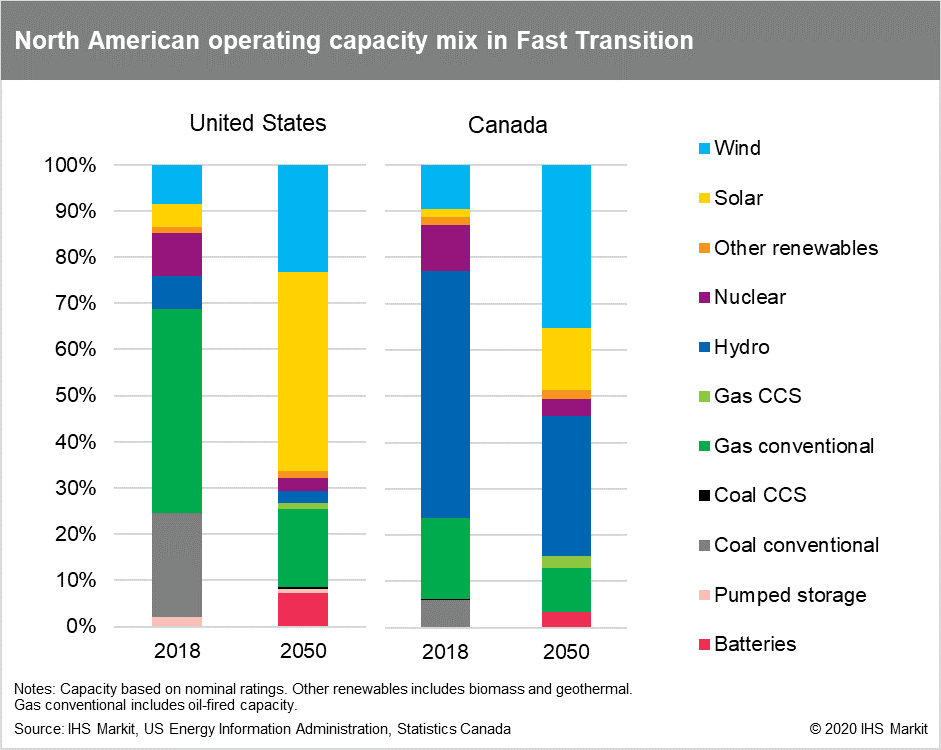 Can natural gas be entirely eliminated from the power system?

Fast Transition demonstrates that significant natural gas-fired capacity (with limited natural gas use) and deep decarbonization goals are not mutually exclusive. However, as local, national, and global discourse shifts to net zero greenhouse gas-emitting economies by midcentury, additional measures beyond those explored in Fast Transition could be implemented that more severely restrict natural gas use.

In Fast Transition, we have achieved greater than 90% power sector decarbonization while still allowing for continued but limited operation of natural gas-fired resources to meet reliability criteria. Understanding the shape of the incremental power system total cost curve while meeting reliability criteria as the economy deeply decarbonizes is a subject for further research, analysis, and intense debate.