Argentina's Vaca Muerta formation is viewed as Latin America's most promising area for the development of unconventional oil and gas resources. An analog often quoted for the Vaca Muerta is the prolific Eagle Ford formation in the United States of America (USA). The Vaca Muerta formation has seen clear benefits from the lessons learned up north in the USA. Active operators are enhancing the productivity of the wells by implementing longer laterals and tighter frac stages, thus optimizing efficiencies and cost structures. Current challenges include an undeveloped transport infrastructure and a dearth of service companies. The development of the Vaca Muerta formation has seen activity ramp up in recent years, however cost reductions and operational refinements will continue to play a critical role in its overall success.

The Vaca Muerta formation is characterised by large volumes of reserves and unique geological heterogeneity. Historically, the Neuquén Basin has been Argentina's most prolific basin, with first production coming online in the late 1920's. Conventional production from the Neuquén Basin peaked around the 2000's and since then it has seen a gradual decline. The Vaca Muerta formation, one of the most prolific unconventional formations being targeted by operators, has close to 310 billion barrels of oil equivalent of recoverable reserves and is expected to revive production from the basin.

Along with the Vaca Muerta formation, other unconventional tight gas formations such as Mulichinco and Lajas are also being developed in the Neuquén basin. Activity has trended higher within these tight gas formations as well. This activity jump is expected to create healthy competition to source and utilize the limited resources and service companies available in the region. However, the Vaca Muerta formation is expected to attract a lot of these resources as it provides an opportunity to concentrate resources geographically and lead development thus bringing operational efficiencies with it.

Many natural drive unconventional wells have come online within the Vaca Muerta formation. However, there is also an uptick in the number of artificial lift installations in the development of this formation. The operational learning curve could mimic or be extremely similar to the unconventional formation development in the USA. A large number of wells being drilled currently are all horizontal or directional in nature. The main driver of cost for a Vaca Muerta well is the drilling and completion activities. As a result of this, one of the main areas of focus to bring down the cost of a well drilled in the Vaca Muerta is optimization of the drilling and completion activities. Companies like YPF have deployed walking rigs to reduce costs and gain efficiencies.

YPF is working towards maximizing returns through its technical optimization efforts. The wells being drilled by the company in the Vaca Muerta formation are being drilled faster, with long laterals and more concentrated frac stages. The number of frac stages per well has also gone up in the past few years. While drilling costs form a big portion of the total cost of a well drilled, operators developing this unconventional formation are trying to manage this by establishing long term contracts with the drilling contractors. The use of walking rigs has helped lower drilling times.

The other operational challenges include limited infrastructure to deliver the production to the demand points, sourcing of water for fracturing the unconventional wells, managing the produced water and sourcing material such as sand for fracking. Completion costs, which are heavily weighted by frac services and proppants, are being managed by operators by engaging in and establishing vertical integration where they own such services as well. The number of wells per pad has gone up gradually from approximately 3 wells in 2011 to close to 8 wells in 2018.

The cost of drilling an unconventional well in the Vaca Muerta is approximately $8 million. The cost of drilling has come down considerably over the past few years. Year on year the cost to drill a well has come down $1.5 million on average. Operators such as YPF have managed to bring the well cost down from $16 million in 2014 to the current $8 million, a 50% reduction in costs. The observed trend for the unconventional formations in the United States has been a continuous reduction in costs and improvement in efficiencies. If the same trend is followed in the Vaca Muerta formation, average well costs could be reduced further over the long term, making it a very economical and competitive unconventional resource.

The Neuquén Basin within Argentina is expected to continue to attract investments and deliver long term production growth. The other producing basins in Argentina are being impacted by a decline or depletion in the overall reserves along with a lack of significant discoveries in recent years. The Neuquén Basin's productive formations are expected to offset the declines from the conventional sources while the Vaca Muerta formation will add to the long-term production growth. 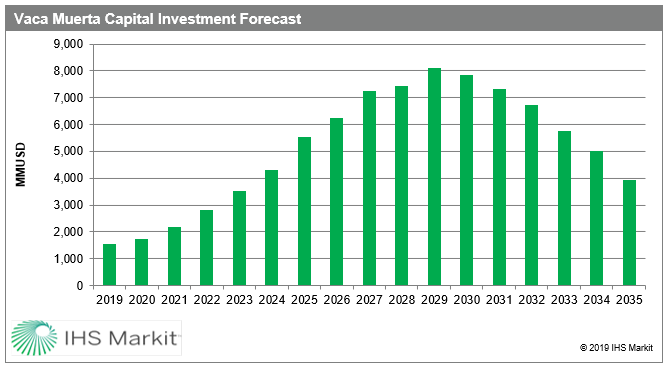 In Argentina, provinces have jurisdiction over the hydrocarbon resources which are located within their territories. The contract model is concession based. The Neuquén province received quarterly bids for certain areas. The other three provinces have held licensing rounds on a regular basis. The current income tax for the country is 30% and this will come down to 25% from 2020. Provinces are also responsible for environmental regulations. For the development of the unconventional Vaca Muerta formation, the government has put in place an incentive program, which provided a well head price of $7.5/mmbtu. These subsidies could be systematically reduced in the coming years.