The US: Update on the economy and healthcare

As we begin the new year, let's take some time to look at what we expect to happen on the economic front -- for the US in general and then in healthcare more specifically.

An overview of the US economy

On the economy front, the US appears to bounce back. The real GDP growth in the third quarter of 2013 was revised upward from an annual rate of 2.8% to 3.6%, mostly due to additional inventory accumulation. The inventory buildup was the largest in three years and contributed 1.7 percentage points to real GDP growth. An inventory correction will reduce growth in the fourth quarter. Purchases of new US homes exceeded projections in November, holding near a five-year high and showing the housing recovery was gaining momentum even as mortgage rates climbed. Last but not least, orders for long-lasting manufactured goods surged in November - a sign of economic growth in the long run. With the economy bouncing back, the Federal Reserve (Fed) is expected to reduce its QE3 securities purchases beginning in January. Consumer spending is accelerating in the fourth quarter in response to solid gains in employment and household net worth. However, consumer spending will take a hit, as 1.3 million unemployed Americans are about to have their unemployment benefits discontinued.

An overview of US healthcare

On the on the healthcare front, the Congressional Budget Office (CBO) attributed the slowing-down of cost growth in recent years to negative wealth effect of the recession. The CBO also believed that a) significant part of the savings results from structural change in how healthcare is now being delivered and b) the Affordable Care Act (ACA) plays an important role in slowing the growth. In addition, there is a decline in expensive new blockbuster drugs, as existing off-patent drugs are being replaced with cheaper generic brands. On top of that, there is the act's reduction in Medicare "overpayments." Another source of savings involves changes in the way Medicare pays for services. Medicare is encouraging outcome-based care, which rewards health organizations for overall success in improving care while controlling costs.

One way the ACA impacts corporate America is through excise tax. It curtails the growth of private insurance premiums by creating incentives to limit the costs of plans to a tax-free amount below the threshold. Even though the tax is still 4 years away, many employers are already scaling back coverage to avoid the tax.

While drug manufacturers were relatively untouched by the ACA's specific regulations, they will be strongly affected by expanding rebates for Medicare and Medicaid which will enable more patients to have access to more drugs. That will create a rise in sales volume and patient demand, especially for the influx of new people who are insured. We expect the health spend growth to hit 6.6% this year - reflecting the one-time positive shock of ACA - before falling to 5.3% next year. 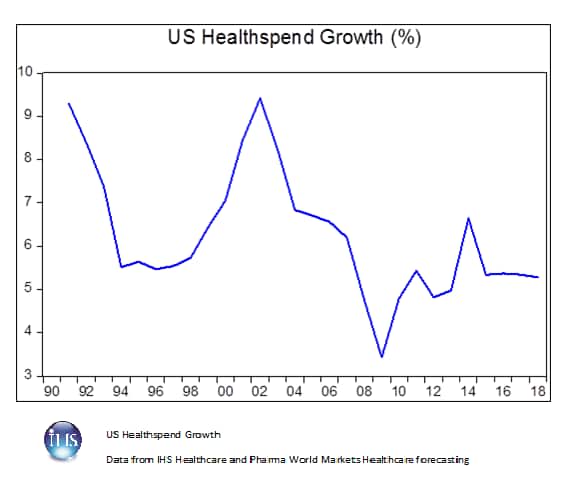