In 2020, well over 200 GW of wind and solar PV capacity was added globally, further reinforcing the importance of renewables in the global power mix. While the lion's share of 2020 capacity additions came from just two markets—China and the United States—close to 50 markets recorded double digit growth in the past year.

Sound fundamentals and the availability of an attractive yet phasing down subsidy positioned the United States as the most attractive market for renewables investment according to IHS Markit's new Global Renewable Markets Attractiveness Rankings. In contrast, Mainland China, which accounted for over half of the world's total non-hydro renewables additions last year, ranked third on the attractiveness ranking—just behind number two Germany—as difficulties in accessing the market weighed down its overall score. 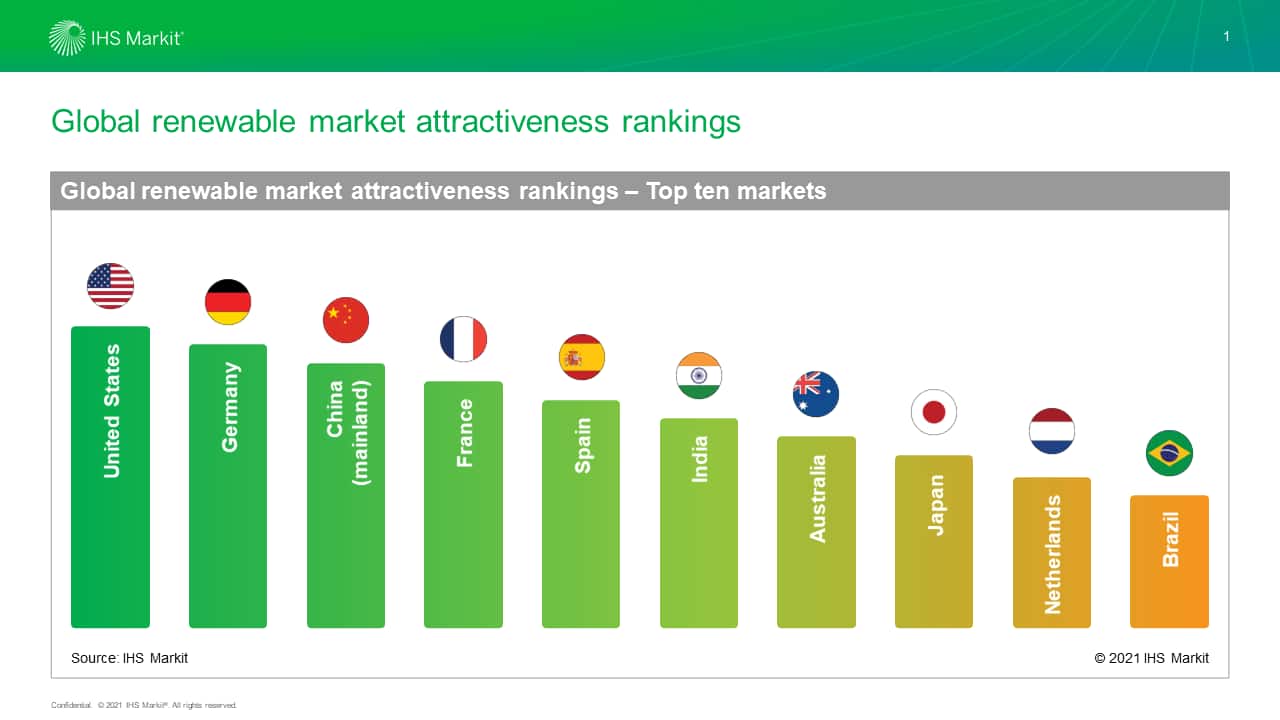 France and Spain secured the fourth and fifth spot, respectively, based on strong market fundamentals backed by stable procurement mechanisms and long-term clean energy targets. Similar factors also boosted the ranks of Japan (Rank 8) and the Netherlands (Rank 9), further supported by their strong impetus towards offshore wind—expected to be the fastest growing renewable energy technology in the next decade.

The ongoing transition to competitive procurement and a growing need for grid-parity renewable energy has forced investors to look beyond financial incentives, and focus on factors including economic stability, market liberalization, and investor friendliness. With renewables increasingly forced to compete on cost with other generating technologies, investors are on the lookout for established yet fast growing markets to minimize risk.

Recent announcements of 100% carbon neutrality targets from major emitters like mainland China, Japan, and South Korea are important milestones in the path towards net zero and will provide a strong upside to renewables build. Even so, while strong ambitions are perceived positively by investors and testify to a market's commitment towards renewables, this needs to be backed by a well-conceived implementation framework and adequate infrastructure.

A growing number of markets are facing infrastructure preparedness issues on their quest to decarbonize. These include India (Rank 6) where onshore wind build has suffered from lack of grid and land access, Australia (Rank 7) where disconnect between federal and state ambitions have increased investor uncertainty, and Vietnam (Rank 12) where mushrooming wind and solar additions have started to expose fault lines in the national grid.

IHS Markit's Global Renewable Market Attractiveness Rankings is an interactive tool which allows identifying the most attractive markets for renewables investment globally. Utilizing an integrated proprietary methodology, the rankings provide comparable views of 35 markets globally for renewables, solar PV, onshore wind and offshore wind investments. The markets covered in this first release are expected to account for over 90% of the nonhydro renewables build till 2030 globally.

The markets are evaluated on the basis of a comprehensive scoring approach comprising nearly 20 parameters ranging from direct stimulus mechanisms such as renewables ambitions and support mechanisms, to more indirect influences including market fundamentals and opportunity size.

The Global Renewable Market Attractiveness Rankings is produced by the IHS Markit Global Power and Renewables service and will be updated biannually.

Indrayuth Mukherjee is a senior research analyst at IHS Markit. He specializes in renewable power markets globally with a special focus on wind energy.