Emerging markets and innovation: The twin pillars of future growth of the solar tracker market

Solar tracker shipments reached new record levels in 2019 with shipments exceeding 31GW globally, an increase of 55 percent year-on-year. Exceptional demand in the United States as well as multiple 1 GW plus markets in Brazil, Mexico, Chile, Spain and Australia helped propel shipments to new heights. Furthermore, for many suppliers active in the United States the stepdown in the investment tax credit (ITC) and the willingness of developers to safe harbor for projects yet to be built has meant that 2020 started very strongly for numerous suppliers.

The supplier landscape continued to be extremely competitive as leading suppliers expanded into new markets globally as solar tracker technology becomes increasingly accepted by developers, EPC's and the financial community. Leading suppliers such as Nextracker and Array technologies accounted for almost half of global shipments as they both enjoyed a strong year due to booming utility-scale market and as developers in the United States safe harbored trackers in order to safeguard a higher ITC rate.

Solar trackers are uniquely positioned to assist with safe harbor as they do not degrade compared to solar modules. Additionally, prices are less likely to decrease relative to other balance of system components and by their nature, the components are relatively robust for storage while waiting to be installed. Other suppliers such as Gamechange solar, Soltec, Nclave, Convert Italia and PVH were all active in the United States and some suppliers received significant orders to safe harbor in 2019. 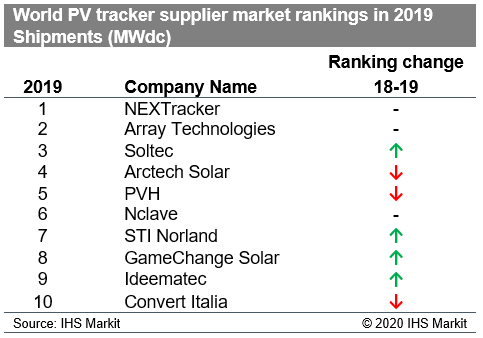 The top-ten supplier rankings continued to be dominated by suppliers from United States, Spain, Italy, Germany and China as a result of strong domestic market demand and their willingness to expand abroad. Demand for trackers in mature markets such as United States, Spain and Australia continued to be strong but demand in recent years has grown in emerging markets such as Brazil, Mexico, Chile, Argentina, South Africa, Saudi Arabia and United Arab Emirates (UAE). However, IHS Markit expects volatile demand for solar trackers in these emerging markets in the next 1-2 years due to the impact of COVID-19 globally. PV projects in the pipeline that are not at an advance stage in some of these markets are expected to be delayed over the next year or two but overall, these markets will remain attractive for solar trackers due to the higher irradiation and the fact that most of the markets have large targets for large utility-scale PV projects. 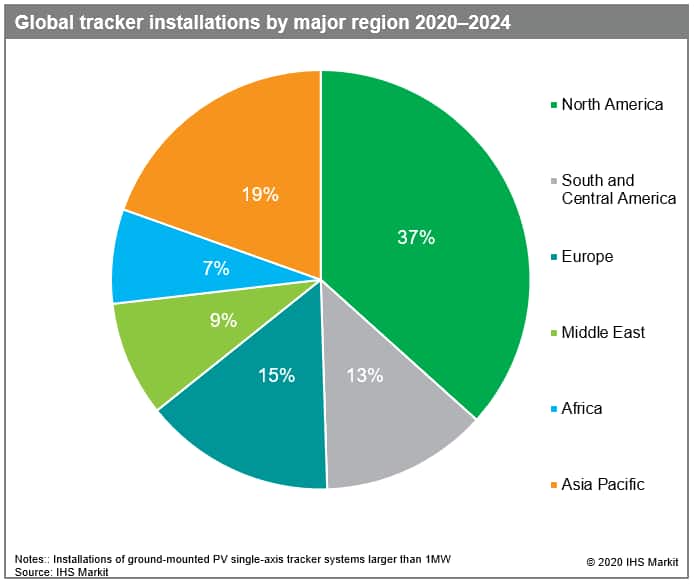 Latin America has been one of the key emerging markets for solar trackers in recent years but the Middle East and Africa (MEA) region is expected to be increasingly attractive markets in the next five years. Egypt and South Africa have already embraced solar tracker technology along with markets such as Saudi Arabia and the UAE. Nascent markets such as Oman are expected to install solar trackers while markets such as Jordan, which have a substantial installed base of projects with solar trackers, are expected to keep utilizing this technology. A plethora of African countries with large utility-scale projects are providing a testbed for showcasing the added benefits of solar trackers. IHS Markit predicts that there will be a mix of suppliers active in these markets. Some suppliers such as Pia Solar who have been very active in South Africa is well placed to expand into other African markets as they open up while other suppliers such as Arctech, Soltec, Convert Italia, Nextracker, PVH and Ideematec who installed trackers in specific markets across the MEA region can leverage these real world examples to showcase to partners the benefits of their offerings.

Despite Asia being the largest region for solar installations in the next five years, it will be a challenging market for solar tracker suppliers. Overall, many of the largest markets such as India, China and Japan still prefer fixed tilt structures due to climatic conditions, site limitations, the availability of cheap labor and sensitivity to higher upfront capital expenditure. Australia continues to be the most attractive market as customers are very comfortable with the technology and its added benefits.

Single-axis tracker suppliers are riding the waves of the rapid innovation underway in the solar module market. Next generation modules are increasingly being released which are much larger in size in wattage terms and are expected to have higher efficiencies. Module suppliers are also ramping-up production of bifacial modules that can enable a further energy gain of up to 20 percent subject to ground conditions that govern the albedo effect.

Albeit that solar trackers benefit hugely from module innovation, solar tracker suppliers continue to invest in research and development in order to take advantage of the benefits of new module innovation. Tracker suppliers often redesign torque tubes, clamps as well as undertake in-depth wind and structural testing of any new tracker re-design when new modules are released on the market.

Overall, solar tracker prices are expected to continue to decline on a dollar cost per watt basis as the energy production per module continues to increase .The major benefit to developers and EPC's will be the improved energy yield of using higher powered bifacial modules along with solar trackers which is expected to greatly improve the levelized cost of electricity for utility-scale projects and make solar more cost competitive with other forms of energy generation.

IHS Markit experts are available for consultation on the industries and subjects they specialize in. Meetings are virtual and can be tailored to focus on your areas of inquiry. Book in a consultation with Cormac Gilligan.

Cormac Gilligan is an associate director for the Solar & Energy Storage team at IHS Markit.