The brakes of an automobile are unquestionably one of the first lines of safety in motoring and, for this reason, vehicle manufacturers have invested and will certainly continue to dedicate significant investments in order to upgrade vehicle braking systems.

Automotive brakes function using mechanical means such as cables, but actuation has been modernized over time to include hydraulic, pneumatic and electrical methods or a combination of these.

Electrohydraulic brake actuation is considered the first big step towards brake-by-wire systems. It was a mechanism partly developed by Bosch and firstly deployed by Mercedes-Benz nearly at the turn of the millennium.

While conventional hydraulic brakes work purely by using hydraulic fluid lines to transfer pressure from the brake pedal to the callipers, in an electrohydraulic system, sensors measure the amount of pressure applied by the driver on the pedal. These signals are interpreted by an electronic control unit (ECU) and, after taking into consideration other parameters such as the speed of the vehicle, operates the brakes via a hydraulic circuit and solenoid valves. This removes any direct physical connection between the driver and the wheel brakes.

Such a system has immense potential that includes boosting the applied brake pressure in the event of an emergency stop. This enables automakers to integrate autonomous emergency braking (AEB) functionality, wherein the vehicle can monitor the road ahead and apply the brakes if required with no intervention from the driver at all.

Given the above advantages, it is no surprise that the demand for electrohydraulic brake actuation systems is forecasted to almost double within the next two years. This is expected to continue rising to more than 28 million units by the year 2026, resulting in a growth of market valuation from almost USD3 billion in 2020 to in excess of USD7 billion in 2026. This implies that electrohydraulic brake actuation will move from a 13% market share (out of the total brake actuation system market) in 2021 to around 29% in five years' time. 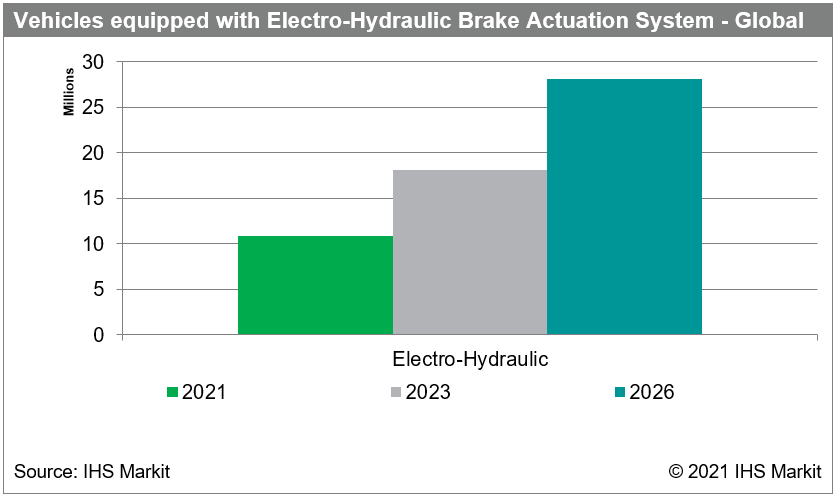 Several automakers such as General Motors, Tesla and Toyota amongst others, have already adopted this system for their various vehicle platforms - the details of which are outlined below: 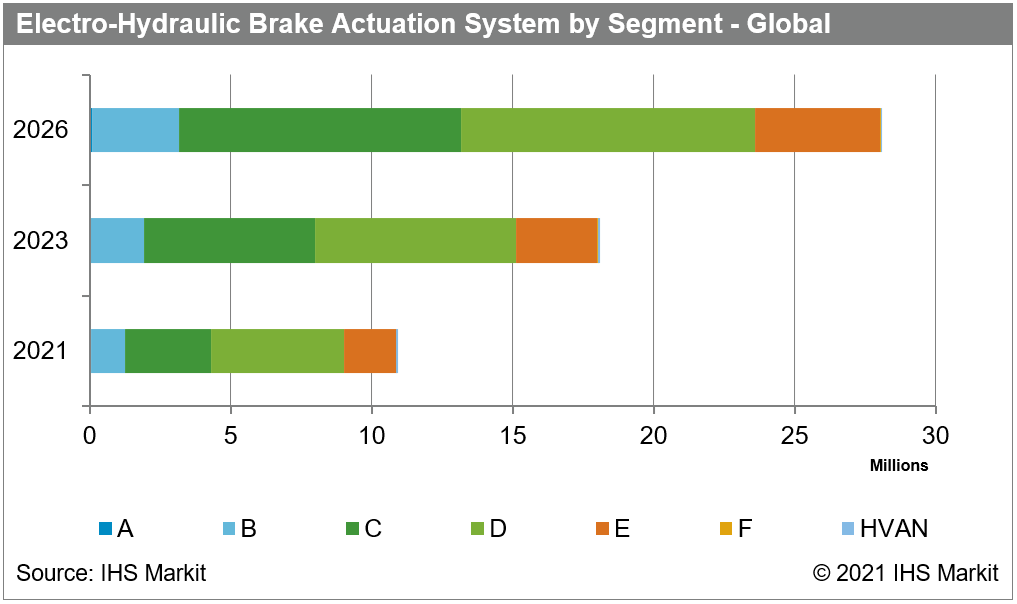 Over time, electrohydraulic brake actuation is expected to percolate into all vehicle segments, but growth is particularly evident in the C-segment. Although it currently accounts for approximately three million units, IHS Markit data forecasts it to rise to nearly 10 million units by 2026, implying a rise of 230% within a five-year time frame.

The demand from the B-, D- and E- segments are also projected to register steep increases during the same time period at 150% (1.2 million to 3 million units); 120% (4.7 million to 10.4 million units); and 140% (1.8 million to 4.4 million units), respectively. This can be attributed to the fact that as vehicle automation climbs greater heights, this technology is seen as an enabler of autonomous braking functions. As a result, suppliers of this component stand to gain by specifically focusing on electrohydraulic brake actuation and brake-by-wire systems.

Based on all the above, one could argue that electrohydraulic systems are seemingly destined to be the new commodity in the chassis area; as EPS has become in steering. However, the reason why technology is unlikely to ever reach these heights is down to its cost.

Despite the increased penetration across various vehicle segments, this price point is still relatively prohibitive for mass-market OEMs. The system's complexity also means that its cost is unlikely to be reduced by much upon mass volume production. IHS Markit forecasts the price of electrohydraulic systems to go down by about 5-6%, mainly driven by a decrease in ECU costs combined with increased volume output.

Looking to the long term, hydraulic lines are set to become obsolete in a fully electrified and automated future. While electrohydraulic systems can - and likely will - be used in autonomous vehicles, they will be slowly substituted by electromechanical variants that do not include fluid lines at all.

This could potentially further increase the performance and handling of a vehicle, rendering the system more compatible with the artificial intelligence that will 'drive' the cars of the future. Many suppliers are now working on this system and IHS Markit data suggests that the first models on the road equipped with such solutions will appear around 2027.

The capacity for analog chips is expected to grow, but it is unlikely to be sufficient to meet the increased demand… https://t.co/MN7wBY7XEO