After a flurried few months of relatively quiet investment in infrastructure, Facebook announced the big deal. Along with Microsoft, Facebook will be laying a new undersea fiber cable from the United States to Europe, taking it further into the realm of big international telecom providers like Level 3, Tata Communications, or Telstra. This follows agreements with Eutelsat and Spacecom to lease high-throughput Ka-band transponders for internet delivery over sub-Saharan Africa, agreed late last year.

Facebook's steady positioning as an infrastructure owner is the end of a longer process, and is paralleled by similar initiatives at Alphabet (Google). For several years, Alphabet has been putting funding into "moonshot" technologies. These include Project Loon and Project Wing, both of which are designing high-altitude near-space vehicles for mobile transmission, aimed at providing internet services to remote areas while building out its own local networks as Google Fiber and Project Fi; and also investment in mid-Earth orbit (MEO) satellite operator O3b. Facebook, on the other hand, has been developing technology in its Connectivity Lab division, including a near-space internet drone called Aquila (brought in from the acquisition of British-based drone maker Ascenta in 2014).

The strategic question is why service platforms such as Facebook and Google are investing in heavy international infrastructure. The answer has to do with sustaining user growth and enabling higher value services. Both Facebook and Google are bandwidth-hungry platforms, increasingly provisioning higher volumes of higher value content and services such as video streaming, live gaming, and virtual reality. These not only require more bandwidth, but they also have very different peak bandwidth profiles and much lower tolerance to latency. It is this kind of logic that has led to Google Fiber and Project Fi in the United States, and is driving Facebook and Microsoft to lay a high-bandwidth subsea cable between the state of Virginia and Spain.

On the other side of the equation is the increase in global reach to connect 3 billion unconnected denizens. This is a pool of potential Facebook and Google users who don't yet have any access to the internet. But rather than wait for local incumbents, telcos, or governments to provide internet connectivity, Alphabet and Facebook, along with others, view the speed of investment as a global market failure.

Dispensing with the usual corporate requirements to make money from an investment outlay, both are willing to spend huge amounts of money upfront to build the kind of international data backhaul and access networks that have previously been the sole purview of telecom giants. By cutting out the middle man in the internet value chain, the temptation has also been to cut straight to the point and funnel these new customers into walled-garden versions of the internet, such as Facebook's internet.org initiative-an approach that fell flat when pushed in perhaps its biggest single new market opportunity in India.

Alphabet is more closely aligned with the broader internet, able to take money from its own platforms such as Google (search), YouTube (video), and Android (mobile), but also from across most of the rest of the commercial Web in affiliate advertising. But while Alphabet's incentive may not be to funnel people toward quite such a closed platform, the intent is still to turn the wider world of new users into eyeballs and clicks for monetizing.

What is likely to prove the most important long-term impact of the internet's big beast romping into the world of heavy infrastructure is the way they will calculate return on investment. Neither Alphabet nor Google needs to make back money on whatever they spend on drones, satellite transponders, or undersea fiber-it simply isn't their core business to amortize infrastructure investment, and therefore they likely won't try to.

This throws a huge wrench into the economics of companies that do need to make their money back on providing access or bandwidth through their infrastructure to pay off the costs: they don't benefit from the additional billions that come from online advertising, revenue shares on application, or user data analytics.

While Alphabet has, indeed, used Google Fiber and Project Fi to compete directly in the consumer broadband market, different approaches are being taken for wider infrastructure. Alphabet seems more inclined to sell the technology it is developing in Project Loon and Project Wing to local governments and operators as a means for them to roll out better networks in rural areas, spreading the internet but not closing the pipe. By contrast, Facebook seems more inclined to directly offer the pipe and the platform, most likely in the guise of internet.org for its rollout across Africa, while its transatlantic fiber link will be used to offer high-bandwidth Facebook services such as live video streaming and VR social and gaming. 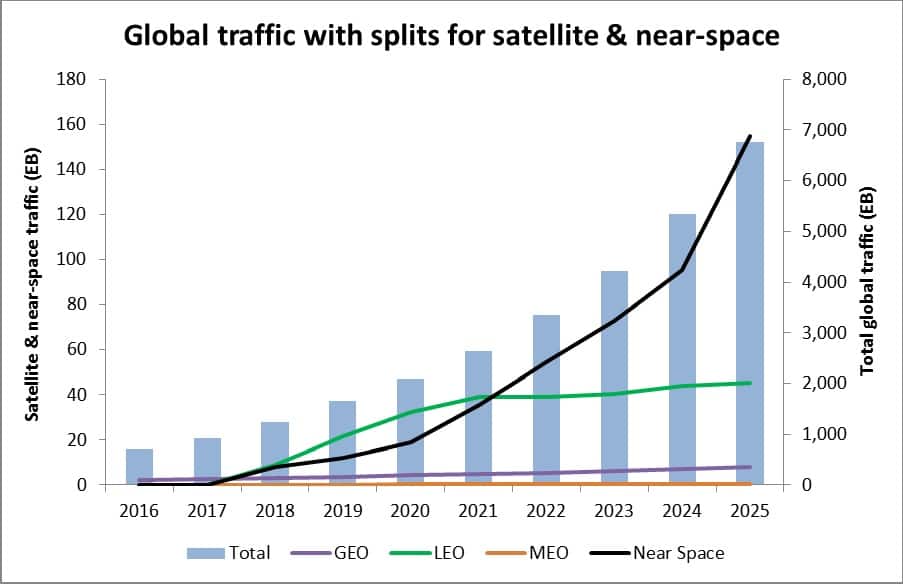 This may be the beginning of a new phase for global infrastructure, driven by the needs of content services rather than the ability to charge consumers for access. Since the launch of the internet, traffic has grown exponentially, reaching over 500 exabytes (EB) of transmitted data to end devices in 2015 and projected to grow to almost 7 zetabytes (ZB) by 2025. Adding to this already huge volume will be data transmitted through multiple hops of the network, in the core and backhaul.

Within this mix, satellite and near-space make up only a small fraction of total traffic, mostly by technology that is closer to the earth, and therefore has a smaller footprint as well as lower latency, and is likely to be found in much greater numbers. Near-space drones and balloons like those being developed by Alphabet and Facebook look like they will lead the technologies with wide-area coverage, almost certainly taking the role of mobile towers in the sky for rural and developing markets.

Among satellites, low-Earth-orbit (LEO) constellations such as those planned by OneWeb and SpaceX are set to take the bulk of the rest of the traffic, followed by high-throughput geostationary-Earth-orbit (GEO) satellites-the kind of stationary orbits currently used for direct-to-home satellite TV. The interesting thing about these suborbital and orbital transmission devices is that they offer a much greater coverage than either mobile or wired technologies, often starting with a radius of 50-100 kms and ranging up to one-third of the surface of the planet. Therefore, while the total traffic might not be that high, the coverage will likely provide access to millions-if not billions-of people currently off-grid and unlikely to see a fiber cable and modem in their homes anytime soon.

Investment in and repurposing of a wider range of infrastructure may open up options which have previously not existed. Infrastructure ownership has traditionally been siloed into platform specialists, such as satellite operators, undersea cable operators, mobile operators, and copper telcos. The future economics of internet traffic is already challenging this compartmentalization of the industry, pushing companies to make the most efficiencies out of their available infrastructure elements. The wider one's reach is, the more data there is that can be rained down on many devices simultaneously. Thus, an amount of transmission that might be relatively small on a global scale, such as the total throughput of the entire global GEO satellite fleet, may be magnified by having a wide area of coverage and be used to transmit large volumes of highly concurrent data, such as live TV, to may users simultaneously. This represents a measure of efficiency not possible with networks offering less reach or point-to-point infrastructure.

As Alphabet and Facebook, along with others (Apple or Amazon perhaps), reach the natural limits of the economics governing the pre-existing infrastructure market, it seems likely that they will invest in a more sensible configuration of infrastructure in order to better support the content and services that drive their businesses. It will take a big budget and equally grand vision in order to rationalize global infrastructure use, allowing things like GEO satellites to provide backhaul to content-delivery-network (CDN) technology in near-space or LEO. However, this is exactly the kind of reorganization and integration of networks that would be needed to allow for on-demand video in developing markets.

The logical conclusion is that there is unrealized value in many of the long-term infrastructure investments-from undersea cables to satellites, from mobile networks and fiber to the home-that can be released by tying them together better.

And yet, such an approach risks consolidating the action in the hands of just a small number of global giants. Put everything together, the recent profit warnings from major satellite owners might make them look like attractive acquisition targets for anyone looking to really shake up the way the global internet is wired.

Tom Morrod is the Senior Director for Consumer Electronics, Broadband and Video Technology at IHS
Posted on 20 June 2016