The symbiosis of HMI and automated driving

Buttons and knobs are so passé. Drivers around the world have been using them to control radios since the 1950s. True innovators would look at buttons and knobs as a legacy technology, not to be taken for granted. Just because it worked before, does not mean it cannot be improved. In fact, new automotive technologies act as the catalyst for the continuous advancement in HMI design.

As vehicles become more and more automated over time, the opportunities for further innovation in in-vehicle HMI controls will follow. Designers are now looking at buttons, knobs, touch screens and controllers, and beginning to question the status-quo. IHS Automotive research shows automated driving technologies and new automotive HMI technologies like gesture recognition, augmented reality, and ever-more advanced speech recognition algorithms, are quite complementary in their development.

Can History Teach Us a Lesson?

Back in the 1950s, those simple buttons and knobs were added to the vehicle to manage a vehicle function - the radio - that was new to most vehicles and most drivers at the time. Buttons and knobs were also growing in popularity in the home as more and more kitchen appliances and televisions entered the consumer's daily life. These controls ruled the center stack for nearly half a century before another new feature was added to the car.

Enter the navigation system, another revolutionary new product for the car that came to be around the 1990s. Navigation also required a new type of user experience for drivers, as its early days had some seriously poor user experience designs. If button and knob design had been kept, we might all be driving around in vehicles will full keyboards in them. Many early implementations offered touch screen keyboards and digital menus, which took off among Japanese OEMs, but others - namely the German OEMs - wanted to innovate on the button and knob to improve the experience.

Believe it or not, disassociated multi-function controllers for in-vehicle infotainment operation have been around for almost a decade and a half. BMW opened the automotive industry's eyes to the world of its iDrive on the 2001 BMW 7-Series (E65). Needless to say, the solution was not well received. In fact, iDrive, along with some much unexpected design cues, created a temporary increase in value of the previous (E38) 7-Series models, the version the E65 had just replaced. BMW kept the original iteration of the iDrive controller alive for several years after that, offering only slight tweaks to the platform until a major revision in 2008.

During that time, BMW's closest competitors - Audi and Mercedes-Benz - were working on their own multi-function controller design and HMI philosophies. Audi's MMI launched on the 2003 Audi A8 (D3) and slowly pushed it into other Audi models as it became refined. Mercedes-Benz launched its controller system in 2005 on the (W221) S-Class. Part of the COMAND APS (NTG3) system, it too had similar roots to the original iDrive, but offers a slightly different interaction between it and the on-screen experience compared to BMW or Audi.

After that other solutions emerged. The Lexus Remote Touch offers its own take on a disassociated multi-function controller. Hyundai and Kia offer rotary controllers for flagship sedans like the Equus, Genesis and K900. And now even the likes of Buick, Infiniti, Mazda, Opel and others have transitioned all or some of their infotainment control to a central rotary or touchpad controller.

Has the automotive infotainment system reached its user experience design pinnacle? Like slate-form factor touch screen smartphones, is there no more differentiation to be had? Based on increasing adoption of the technology, one might consider design perfection is near, right?

Can History Repeat Itself? 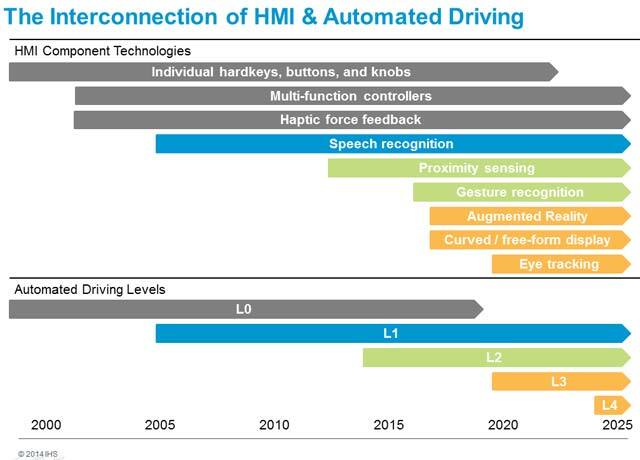 Yet again, another automotive technology revolution is underway. This time, the vehicle itself is leading the transition to new and improved user experience technologies. Automated vehicles offer designers new freedoms as their attention to driver distraction becomes a bit less important.

In the short term, systems will remain quite similar to what drivers are used to today - an array of displays, touch screens, controllers, and buttons. However, even with L2 self-driving car technologies (e.g. Traffic Jam Assist) the prospect of gesture controls, augmented reality and eye-tracking becomes more feasible to include without sacrificing safety or driver comfort.

In fact, IHS sees a lot of alignment between these two realms. In 2014, L2 level automated driving functions began to hit the market in vehicles from the Hyundai Genesis to the Mercedes-Benz S-Class. With the entry point of L2 in 2014 and growth beyond that, IHS forecasts the first true touchless gesture recognition platforms to hit the market by the end of 2015, or early 2016.

Fast forward to the end of the decade, and L3 level self-driving car functions like full auto-pilot in highway and parking lot scenarios will be on the market on a selection of vehicles. By that time, augmented reality head-up displays, curved and free-form displays, and eye tracking will be on the market and growing to millions of unit sales globally. With the driver able to relinquish control to the vehicle in certain situations, eye-tracking and gesture recognition become less problematic (since drivers can take their eyes off the road) while augmented reality and head-up displays becomes ever more useful (since drivers can keep their eyes on the road and still take in information).

Until then, HMI system designers will lead their efforts on the premise of reducing driver distraction. This is still the core tenant upon which the industry's human-factors engineers work on a daily basis. At one point in time, one might have concluded that automated driving could spell the end to in-vehicle HMI innovation. However, if concepts like the Mercedes-Benz F 015 Luxury in Motion are any indication of the vehicle of the future, automated driving will not only change the safety component of mobility, but also the form-factor through which we experience it.

Get started
Fuel for Thought

At IHS Markit, we believe that by working with others, we can have a bigger impact in achieving a more sustainable… https://t.co/sXWmbBqPep