The struggle for Aleppo and the Syrian conflict: Geospatial data modelling insights

The Syrian conflict has been defined by the struggle for territorial control between multiple state and non-state actors as well as the catastrophic impact that this struggle has had on civilian populations and physical infrastructure. By the end of 2015, the Islamic State had lost approximately 15% of the territory it controlled at the start of the year. This statistic is taken from the IHS Conflict Monitor, a project that makes extensive use of open source intelligence (OSINT) to measure and map the footprint of the numerous armed groups active in Syria and Iraq. An area is defined as 'controlled' if our latest information indicates that a particular group is holding defensive positions, or appears to be the dominant military force in that area. The main 'beneficiaries' of Islamic State losses in 2015 were Kurdish forces, which increased the size of their territory by 15% through the acquisition of areas along the Turkish border in northern Aleppo and Raqqa provinces, and the Iraqi government, which re-secured territory in Anbar and Salaheddine provinces. These dynamics are once again in flux with the latest Syrian government and Russian-backed offensive to re-capture territory around Aleppo, Syria's largest city, in early February 2016. 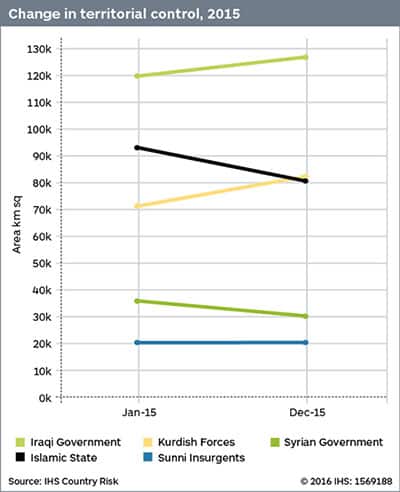 Maps have always been an essential part of how we understand and analyse the strategic dimensions of conflict, and now maps are being augmented or even replaced by geospatial data. However, not all territory is equal, especially in the Middle East where demographic and economic distributions rarely align with political boundaries. As such, exclusive focus on a single indicator can be misleading. For example, notwithstanding the significance of the Islamic State's territorial losses, much has been made of the nominal geographic size of its' so-called 'Caliphate' - which media or policy makers have related to comparably-sized geographic entities elsewhere (e.g. the United Kingdom). In failing to account for the relative significance of places, this approach may distort our perception of the threat and even feed into IS propaganda.

One way of measuring the relative 'significance of place' is to look at how demographic and economic exposure is distributed between the various parties to the conflict. The UN's global exposure database GEG-2015 is useful because it maps exposure at a high spatial resolution and factors in a variety of indicators focussing on the economy, built environment and population. When territorial dynamics are approached from this perspective, we see that the area controlled by the Islamic State at the end of 2015 accounted for 13% of the total economic stock of Syria and Iraq. This is still an alarming statistic but one that contrasts with the 24% of territory that the group controlled and is contextualised against the region's overall fragmentation between multiple parties. This measure probably overlooks the Islamic State's control of territory that is primarily of military value, such as key transportation nodes in the sparsely-populated Syrian interior that enable it to pivot in different directions. However, it does point to a central aspect of the conflict which is that the group's core territory lies east of Syria's centre of political gravity, the Aleppo-Homs-Damascus axis, and does not include any of the region's largest economic or population centres. This is not to make light of the plight of the inhabitants of Raqqa, Mosul or other locations under Islamic State control, but the economic viability of the territory controlled by the various parties to the conflict is increasingly likely to feed into the decision-making of their foreign backers as the five-year long conflict enters what looks to be a decisive phase. It is notable in this sense that the Syrian government retained 32% of the overall economic stock in Syria and Iraq combined at the end of 2015, more than any other actor, and despite nominally controlling only 9% of the overall controlled territory in area terms. 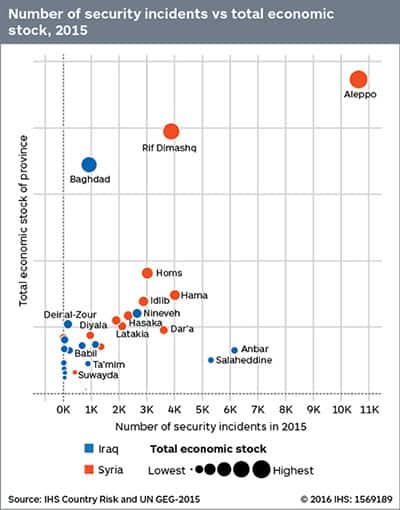 Exposure datasets such as GEG-2015 are commonly applied to modelling the impact of natural disasters but can also be useful in analysing the impact of political violence on civilian populations as well as commercial assets and supply chains. War risks in particular - both interstate and civil - share similarities to some natural disasters in terms of their destructiveness and spatial dynamics -albeit over much longer time scales. What has been particularly notable about the Syrian conflict is the catastrophic level of physical destruction and loss of life compared with a broad range of other conflicts that IHS has collected data on. This can be explained in part by the convergence of fighting around major population and economic centres, which has fed into a succession of local humanitarian crises and broader dynamics such as the refugee crisis. Of more than 52,000 geocoded security incidents recorded by IHS Country Risk in 2015 in Syria and Iraq, 19% took place in Aleppo province, far more than in other regions of Syria or Iraq. The emerging prospect of the Syrian government's encirclement of Aleppo city now threatens a humanitarian crisis on a larger scale than previously seen in other besieged towns, with an estimated 300,000 people potentially trapped in rebel-held areas. It is unlikely to be a coincidence that the area of greatest contestation in recent years is also the most significant economic centre in the region, as represented on the vertical axis of the scatter chart which shows the overall economic stock by province. By contrast, regions that were wholly or partially controlled by the Islamic State at the end of 2015, such as Raqqa, Hasaka, and Deir al-Zour, have seen much less fighting but are also of much lower and economic importance.

Aleppo's significance in the current context is about more than the city's demographic and economic weight, but relates also to the strategic position of the province at large. Losing access to the Turkish border area in northern Aleppo province would constitute a major blow to the smuggling networks that supply the Islamic State's land-locked Caliphate. Conversely, Kurdish control of this area would enable US-backed majority-Kurdish Syrian Democratic Forces (SDF) to connect substantial areas already under their control into a contiguous zone stretching hundreds of kilometres along the border with Turkey. That prospect in turn makes control of the area, directly or via proxies, a matter of critical importance to Turkey, and feeds into its own internal security dynamics in terms of the decades long conflict with the Kurdish separatist PKK.

For commercial or non-government operators concerned with managing the security and safety of assets and personnel in conflict zones, location-based analytics can be critical. IHS' EPOP ('Every Point on the Planet') model measures war and other political violence risks globally at a high spatial resolution and enables users to identify aggregations of their own risk exposure to current or latent conflicts. 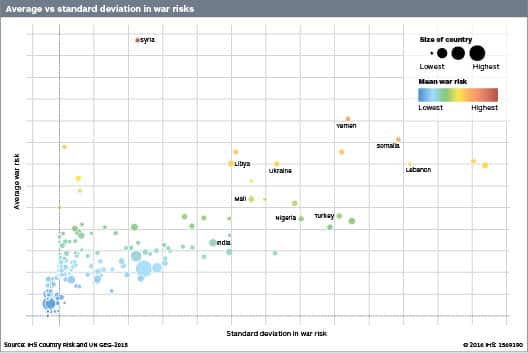 The above representation of the model, which compares the average war risk in each country with the standard deviation in war within the country, highlights the severity of the Syrian conflict but also shows that it is in fact atypical of war risks at large in the way that fighting has affected almost all parts of the country at some point over the past five years, resulting in a relatively low deviation. In many other contexts, IHS data and modelling suggests that loss of life and physical destruction as a result of war are likely to be highly geographically bounded. This can be because the underlying drivers for separatism and insurgency are concentrated (e.g. in Ukraine, where conflict has focussed on the Donbas region where there is a high majority Russian speaking population), or because of limitations in the military capabilities and objectives of aggressors (e.g. the bulk of Hizbullah's destructive rocket capability in Israel falls within 50km or less of the Lebanese border). With Russian aerial support for government forces, the momentum of the Syrian conflict has changed, with the Aleppo area being an increasingly crowded focal point for an intensifying competition between opposing Syrian groups and their foreign backers. The future trajectory of a conflict that has been characterised by fighting across almost the entire country is likely to be decided by what happens in a relatively small, but increasingly important area. This intensification of competition for Aleppo has dire consequences for its people, but also significantly increases risk of unintentional escalation into a broader regional conflict.

Hugo Foster is a senior analyst with the Applied Intelligence team within IHS Country Risk
Posted on February 25, 2016

Assessing the impact of a second #coronavirus wave on #fuel demand, @IHSMarkit has developed an alternative scenari… https://t.co/TzOLm1Umul