The strategic role of memory in the iPhone

With the official release of the iPhone 8 and 8 Plus on Friday (September 22), all eyes are once again on Apple to see how well the new smartphone fares in the market among consumers and the retail channel alike.

But while it is common knowledge that Apple rakes in substantial revenue for the crown jewel of its portfolio, less well-known is the role played by NAND flash memory as a profit engine and key contributor to Apple's massive coffers, especially during the early iPhone years.

That starring role for memory may no longer be true today, as Apple has shifted its revenue model from a focus on hardware to one heavily reliant on services. Even so, the outsize impact of memory can be understood by analyzing the decade-long historical record behind Apple's total bill-of-materials (BOM) cost for the iPhone.

At the IHS Technology Group within IHS Markit, the Teardowns & Cost Benchmarking Services research has built a deep and extensive database containing information on every single component that goes into the iPhone-and what it costs to make each component-to come up with a total BOM cost for every iteration of the phone.

That database goes all the way back to 2007 upon the release of the first iPhone and has continued to this day, with Teardowns announcing its most recent findings on the iPhone 8 in an official IHS Markit | Technology news release.

Memory's place in the iPhone BOM

A study of the historical information in IHS iPhone teardowns reveals many intriguing details on memory as it relates to the iPhone BOM. Overall, the BOM cost is a major component in determining the cost of goods sold (COGS), itself an important measure in calculating the average selling price (ASP).

The IHS Markit graphic below shows the share occupied by memory in the iPhone's total BOM cost throughout the l0 years that the device has been on the market. 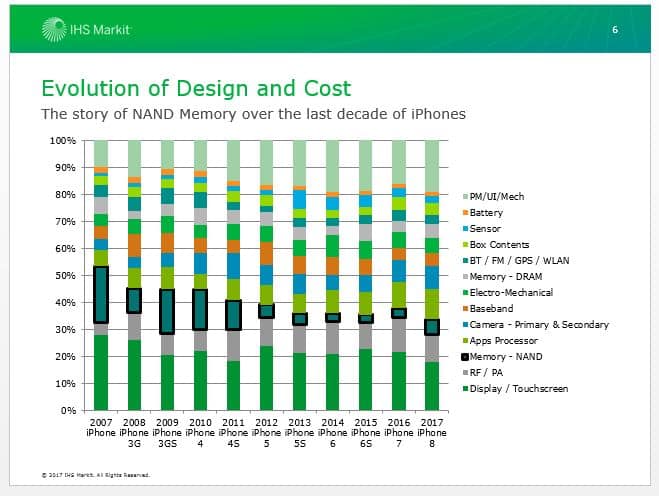 The original iPhone in 2007 contained just 4 gigabytes (GB) of memory and was the second-most expensive component in the iPhone BOM after the phone's display. At $48, the memory cost-per-gigabyte (cost/GB) figure for the 4GB iPhone came out to a sizable $12 per gigabyte on average.

By the following year, market forces had caused the cost of memory to drop significantly. Historical IHS Markit Teardown data shows that the BOM for memory in the iPhone 3G in 2008 amounted to just $16-a huge $32 drop from the previous year.

At the same time, Apple boosted the base memory capacity in the 3G to 8GB. Together those two factors-a plunge in the price of memory, along with a doubling of the iPhone's memory-paved the way for a spectacular reduction in memory cost/GB.

From $12 in 2007, memory cost/GB was now just $2. By successfully curtailing its outlay on memory, Apple was also able to slash the iPhone BOM from more than $230 to approximately $177.

Memory as a profit engine

In the early days of the iPhone, memory occupied a seat front and center in Apple's profit-generating strategy. This was no secret, as Apple capitalized on the decline in industry memory prices to cut its own memory BOM costs-all the while continuing to charge consumers a hefty premium via the iPhone's lofty retail pricing.

Between 2009 and 2015, from the 3Gs to the 6s, the iPhone featured only incremental upgrades in storage capacity, as shown in the IHS Markit graphic below. Yet consumers could expect to pay up to an additional $100 in price premium to avail of the extra memory.

In fact, however, memory had a variable cost of less than 20% of the retail price premium, enabling Apple to reap handsome profits from the lopsided equation. 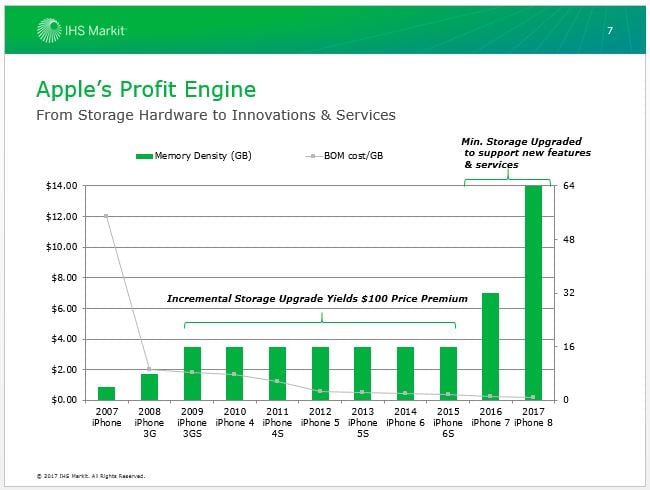 Evolution to a new model

With hardware no longer a revenue driver, memory plays a different role today in the Apple profit playbook, especially as Apple has shifted focus to services as its new profit engine.

Last year with the iPhone 7, the base memory configuration for the phone rose to 32GB, up from the base 16GB level that had remained in place for seven years from the iPhone 3Gs to the iPhone 6s. The larger base memory is no accident, instead representing for Apple a carefully calibrated mechanism that allows consumers to make optimal use of Apple's own incredibly rich ecosystem.

By doubling the iPhone's memory density, Apple is giving consumers a clear signal to utilize with confidence the vast storehouse of apps, music, books, and other media residing in the Apple App Store and iTunes. And should their phones run out of storage capacity, consumers are reminded that they can take advantage of fee-based Apple auxiliary services like the iCloud.

Offering users today a memory-boosted iPhone at the forefront of consumption, Apple is able to happily monetize each ensuing consumer transaction to its own economic benefit.