2021 will be a key year in the development of the solar PV market in China. It is the first year of the 14th five-year plan, the first calendar year after President Xi Jinping announced the 2030-2060 carbon commitment, and the first year for utility and commercial un-subsidized projects. IHS Markit expects the solar industry in China to reach another milestone with more than 60 GW of installations, advancing the ground for the energy transition and displacement of traditional energy sources to fulfill the goal of net carbon future in the next four decades.

The strong outlook for solar PV installations in China is a reflection of the development of the industry in the last decade that is forecast to continue after the publication of the new carbon target.

What happened in the last decade in the Chinese solar market?

1. China dominated global solar PV installations in 2011-2020 (and will continue being the largest installation market.)

With 48.2GW of additional solar capacity in 2020, the National Energy Administration ("NEA") announced 253GW of cumulative solar connection during the period, with roughly 70% of those connection comes deriving from utility-scale projects, driven by feed-in-tariffs. 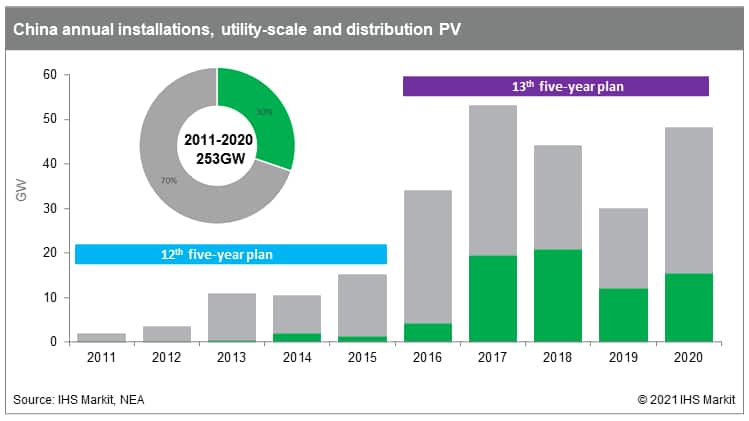 Over the next five years, IHS Markit expects China mainland to continue being the largest solar market globally in installation terms.

2. China solar capacity additions were fueled by feed-in tariff incentives during the past ten years

Policy support has played a significant role in the industry's size, business model, time frame of speed of installations and supply chain movements of solar PV in China.

Chinese solar policy schemes followed a few key stages. First, at the beginning of the 12th five-year plan, the key national wide solar policy was the "Gold Sun Program 2009-2013" and "Building-integrated PV (BIPV) projects 2009-2013," which provided a solar system subsidy (CNY/W). Secondly, a FiT scheme was put into place. After July 2013, the State Council of China released "The notice to promote the healthy development of the solar industry," which provided guidelines on the solar power generation subsidy (CNY/kWh), a "feed-in tariff" on solar power generation.

However, with financial incentives and technology advancements in the solar industry successfully lowering the cost of solar in capex terms, the policy scheme shifted to un-subsidized projects by the end of the 13th five-year plan. Since 2019, NDRC and NEA have already released two rounds of un-subsided projects tenders.

IHS Markit expects 2021 to be another record-breaking year, with 61GWdc of solar additions, equating to an annual installation growth rate of 26% year-on-year. The main demand drivers are (i) the unsubsidized program, (ii) the residential segment, (iii) special pilot projects in high-voltage transmission and distribution lines, (iv) and renewable parks in some provinces and (V), some additional policy schemes like the special transmission and distribution pilot projects. Former policy drivers like the PV poverty alleviation program and the Top runner program have been now already phased out.

There is a strong pipeline of projects from the unsubsidized PV program announced in 2019-2020 and a further 8 GW of subsidized projects that are being transferred into the pool of unsubsidized projects. Yet, IHS Markit remains cautious that additional policy developments in China or additional supply chain price increases could put at risk our installation forecast that is strongly skewed to the second half of the year.

Climate commitment has become a central theme in the 14th five-year plan and solar PV will benefit from this momentum.

Energy-related goals included in the 14th five-year plan strengthen both the updated 2030 Nationally Determined Contributions (NDCs) and the carbon emissions peaking target. The development of low-carbon-emissions energies, such as renewables and nuclear, will accelerate, while coal consumption growth will be under tight control.

As part of this announcement, the Chinese Government stated for the first-time specific renewable installed capacity targets as part of the new national climate goals. IHS Markit has revised upwards the five-year solar PV installation outlook in China to reflect the clear commitment to continue supporting renewable development as a pillar of the decarbonization strategy in the country in its search for carbon neutrality.

Holly Hu is a senior technology analyst and researcher on the Clean Energy Technology team at IHS Markit.