The shallow waters of Guyana and Suriname: A promising new exploratory front

Petroleum exploration successes in Guyana have taken on a new dimension with the recent hydrocarbon discovery at the Kawa 1 new-field wildcat (NFW) in the offshore Corentyne block, Guyana-Suriname Basin. Prior to this discovery, successful exploratory activity was limited to the ExxonMobil-operated Stabroek Area located to the north and in deeper waters. The Kawa 1 well was drilled by CGX Resources Inc and targeted three horizons that comprised a total net pay of approximately 54 meters in Campanian to Santonian aged turbidite sandstone reservoirs. Post-drilling laboratory analysis on the nature of the hydrocarbons determined that the well had encountered light oils. The positive results of this well have inspired block interest holders CGX and Frontera Energy, to shift their 2022 exploratory drilling focus from the Demerara block to the Corentyne block. The Kawa 1 discovery has also emboldened exploration in surrounding blocks and shifted operators' efforts towards hydrocarbon potential in the shallow water acreage of Guyana. For example, Repsol has plans to drill an exploratory well in the neighboring Kanuku block, which could follow the similar targeted horizons of the Kawa 1 well.

The results of Kawa 1 are also significant for operators in offshore Suriname, where exploration has found the greatest level of success in Block 58, which follows the prolific hydrocarbon trend observed in the Stabroek Area. While deeper water drilling relative to this trend within the block has been unsuccessful, there is potential in the shallower waters based on the Kawa 1 discovery near the international border. Furthermore, the 2021 Shallow Offshore Bid Round resulted in the award of three blocks that will add momentum to the exploration of the shallow offshore region. Operators within the shallow water areas are likely to study the success of Kawa 1 and model their exploratory activities accordingly from geophysical surveys to drilling plans. Additionally, the developmental and logistical cost of shallow water projects would likely be lower than deepwater operations, which would increase the attractiveness of the area around the Corentyne block from a budgetary perspective. For example, jackup-operated drilling is more affordable to contracting a drillship for deeper water depths. As successful exploration within the deeper waters continues to elude operators in Guyana and Suriname, the shallow water regions show promise as a second front in the overall exploration of these two countries. 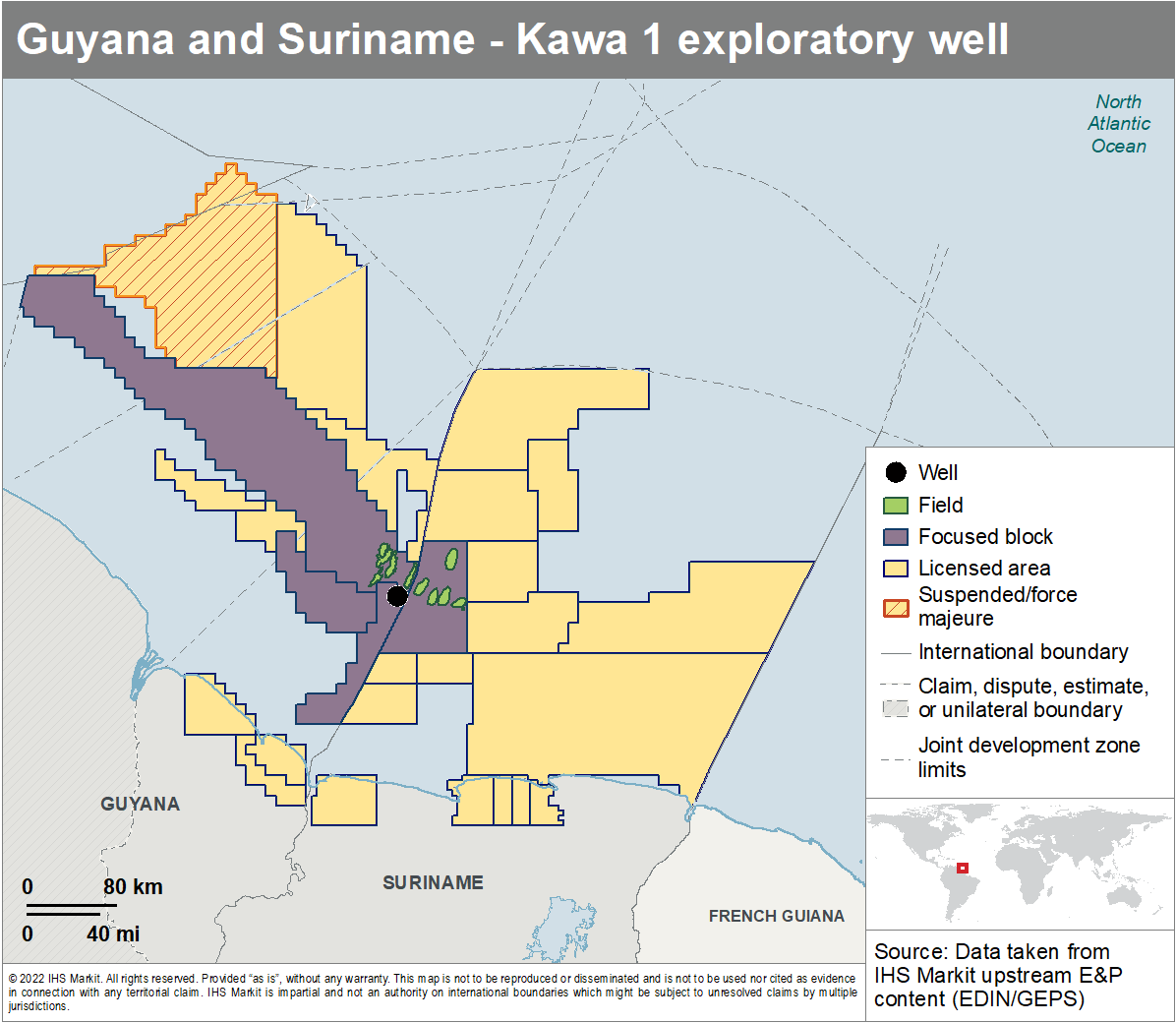 Further information on exploration activity in Guyana, Suriname and the rest of the world, is available via our Upstream Intelligence solutions.