The rule of three - The United States, Russia and Saudi Arabia, are the oil superpowers supplanting OPEC in a new world order

"An era can be said to end when its basic illusions are exhausted"—Arthur Miller, American Playwright.

In the years after World War II until 1970, common beliefs were that the world's oil resources were plentiful, demand would rise along with economic activity, and international oil companies could ﬁnd and produce enough oil to sustain the global oil order indeﬁnitely. Then it was the turn of OPEC in an era marked by resource nationalism, high prices, and the unsettling conviction that oil was a ﬁnite, dwindling, and increasingly scarce resource. That era ended in 2009 with the start of a rapid and so far enduring expansion of US output. We are now in an age when oil resources again appear to be plentiful and an evolving global oil order in which three oil superpowers—the United States, Russia, and Saudi Arabia—are supplanting OPEC.

The massive resurgence in US oil output of the past decade has occurred in this setting, allowing Washing-ton to set the global oil agenda and reshape the oil order to meet the diversity of its interests as the world's preeminent economic and military power. Renewed sanctions of Iran's and Venezuela's oil exports, presidential jawboning on prices, and tariff and trade spats with China are impacting or eventu-ally will impact oil markets via changes in demand and/or supply. This is bringing Russia and Saudi Arabia, the two other oil superpowers, closer together as they jointly respond to US actions.

Last July, Russian President Vladimir Putin even went as far as to suggest during a joint press confer-ence with US President Donald J. Trump in Helsinki, Finland, that the United States join it in the "regula-tion of international markets" because neither country is interested in "plummeting" prices. On a trip to Moscow in mid-September, US Secretary of Energy Rick Perry said that Saudi Arabia, the United States, and Russia can increase oil production in the next 18 months by enough to offset falling supply from Iran and elsewhere. Indeed, the subsequent increase in oil supply from the three petroleum superpowers overwhelmed oil markets, particularly after the United States issued temporary waivers to major importers of Iranian oil. Oil prices began tumbling and the Vienna Alliance of OPEC and non-OPEC producing countries had to quickly agree to jointly reduce supply in 2019. From early October to late December 2018 crude oil prices fell about 40%.

Still, an inclusive global deal between the big three to carve up the oil market is hardly likely, given the United States' free enterprise system and the relatively limited role of government in this context. However, Trump nonetheless has repeatedly tweeted his concern about rising oil prices and OPEC behavior even as he decided to pull out of a nuclear accord with Iran and reimpose oil and other sanctions on that country, OPEC's third-largest producer. Trump even called Saudi Arabia's King Salman last year to ask specifically that the kingdom raise its production. Later in the year, Trump bluntly reminded the Saudi monarchy of its reliance on US protection.

Saudi Arabia and Russia: The response team
As market concern about dwindling inventories and the prospect of a shortfall in Iranian barrels— in addition to those being lost in Venezuela—manifested itself in rising prices during spring 2018, Saudi Arabia and Russia responded by raising their output in advance of a meeting of the Vienna Alliance in Vienna in June. The meeting duly endorsed the higher output. However, Saudi Arabia's oil minister Khalid al-Falih said after the meeting that Moscow and Riyadh had moved in advance because they had "anticipated" the alliance's decision, removing any doubts that Russia and Saudi Arabia are effectively the deciders for the 25 OPEC and non-OPEC countries that form the Vienna Alliance.

Put another way, the United States is now the prime agent of transformation of the oil order. In turn, Russia and Saudi Arabia are the leaders of a global response team, whether to sharply rising US oil output, price and political sensitivities, or oil and other sanctions and trade events. Indeed, the United States has not enjoyed such sway in the oil world since its oil output peaked in 1970.

We could call the current period the post-OPEC era, which is not to suggest that OPEC will not exist; it will, but in the foreseeable future, with nothing like the power it once had as a multistate organization. This is already evident in the insistence by Saudi Arabia since 2014 that it - and in consequence, others in OPEC - would only cut output to support prices if Russia and other non-OPEC producers joined in the effort to adjust to sharply rising production and exports from the United States. This could change if Russia joins OPEC, but this is not yet in the cards. We call it the Rule of Three because it reflects the reality that three countries, above all others, are now calling the shots in the global oil market. This is almost certain to continue for the next five years.

The three oil superpowers account for about 40% of the world oil market—they are the three biggest crude oil producers in the world, by far (see Figure 1).

Beyond that, their geopolitical profiles mean their actions will also be guided by their wider interests and priorities (see figure 2). 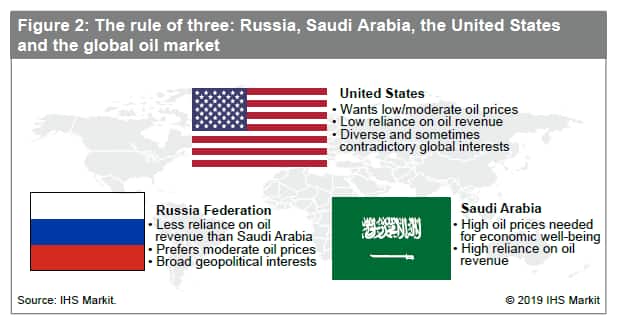 The production of oil is an important but relatively small part of the huge US economy. By contrast, oil is vital to the well-being of Saudi Arabia, a regional power that has for long relied on an alliance with the United States and, more recently, has cultivated better relations with Russia. Between the two is Russia, which is also a military power with wide interests but whose economy is much more reliant on oil production and exports than that of the United States.

We can expect US behavior in oil markets to be the most complex because of the diversity of the country's economic and geopolitical interests. Saudi Arabia's will be the most focused because of its singular depend-ence on oil. In any case, the interaction among these three will establish the rules of the new oil order on the supply side.

The demand side will be different, with emerging economies - notably but not exclusively those of China and India - having a say because they are the engines of growth. Yet demand for oil also will be affected by, among other things, oil prices and the economic, fiscal, and monetary policies of the United States. This balance underlines the interconnected-ness of the global economy and its sensitivity to the largest players.

Note: This report is a condensed version of the October 2018 IHS Markit World Oil Watch.