The risks of vaccine nationalism

As variants multiply and infection rates surge in parts of the world, vaccine nationalism is infecting relations among nations, generating new conflicts and hampering a global response. The COVID-19 pandemic ushered in a new age of unprecedented collaboration within the pharmaceutical industry, aimed at delivering effective vaccines needed to combat the disease. That effort succeeded: seven vaccines were developed in record time and are now being deployed across the world. However, the battle over COVID-19 vaccination supply has spawned another debilitating variant - conflicts among nations' oversupply and availability of the vaccine. The cure for vaccine nationalism - providing timely access and distribution of vaccines - may prove to be elusive in 2021.

While vaccine nationalism may have a positive impact on the instigator country's vaccine supplies in the short-term, it severely undermines the global pandemic response by skewing the distribution of vaccines in a non-optimized manner. If this protectionism persists, it represents the most significant risk to prolonging the pandemic well into 2022 and 2023 around the world - including increasing the risks of new variants emerging that could return into countries that have made greater progress on vaccination.

Approximately 14.7 billion vaccine doses are expected by year-end. In theory, this is more than enough to kill off the pandemic completely, but the inefficiencies that are built into the global distribution mean these vaccines will primarily be distributed to advanced markets. Indeed, some countries in advanced markets have pre-ordered more than four to nine times the number of doses needed to vaccinate their populations. In the meantime, developing countries are effectively blocked from comprehensive vaccination programs, with less than one dose available per person, thus prolonging the pandemic. 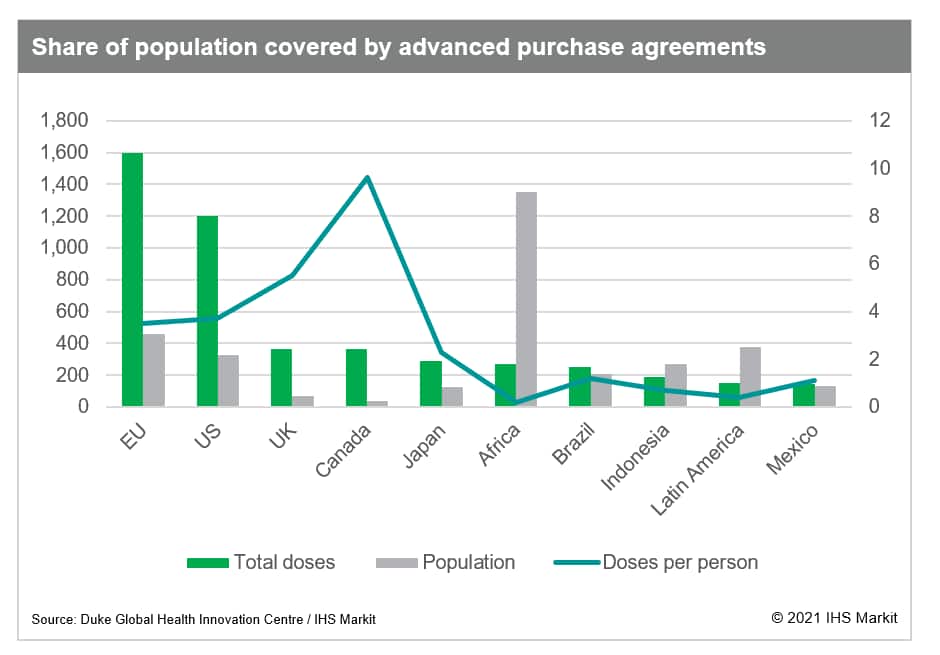 To meet the manufacturing challenges, pharma companies are relying on a massive number of contract manufacturers to meet demand. For example, Pfizer relies on eight manufacturing sites across five countries to meet its supply chain challenges. The complex vaccine supply chains mean any reduction in plant capacity, due to raw materials shortages or export controls enacted by nations, runs the risk of upsetting the global distribution of the vaccine.

Three key global indicators to watch for future developments in the prognosis for vaccine nationalism include the recent EU/UK standoff, US advance purchase agreements resulting in a future vaccine surplus, and India's suspension of export licenses for vaccines. Updates on these important indicators follow.

While the EU and the UK have yet to reach an agreement to avoid tit-for-tat escalations stemming from the EU standoff with the UK over AstraZeneca's AZD1222 vaccine supplies, a joint statement was released on 24 March declaring officials were looking to expand vaccine supplies for all parties. Any agreement is likely to involve the UK forgoing some of the promised supply from the Halix production site in the Netherlands, which has been at the center of the EU-UK dispute over the AstraZeneca vaccine.

Several EU member states such as Sweden, the Netherlands, and Belgium voiced skepticism at the European Commission's latest effort to expand protectionism, precluding unanimous and explicit backing of the new proposal. Part of the motivation likely stems from interlinked supply chains, which, in the event of the introduction of export controls, would likely constrain the EU's vaccine supply as some production sites within the bloc rely on the import of compounds from non-EU countries, including the UK, to produce vaccines. Stricter export controls from EU member states would significantly impede distribution around the world, as well as the second phase of the vaccination program in the UK.

At present, the US has advance purchase agreements in place for approximately four times the number of doses needed to vaccinate its population, retaining nearly all of its vaccine supply for its domestic population. The only exception was the announcement in mid-March that the US had agreed to send several million doses of unused AstraZeneca vaccine, which has yet to receive US regulatory approval, to Mexico and Canada, likely as part of a broader initiative to incentivize Mexico to support curbing migration flows on the US southern border. Although the Biden administration has now said that anyone over 16 can get the first dose of a COVID-19 vaccine by April 19th, complicating the roll-out in the United States is the politicization of vaccination and reluctance of significant segments of the population to get vaccinated.

Despite this near-total prioritization of the US domestic market up until this point, IHS Markit expects the US will shift to a focus on vaccine diplomacy, with the US taking a more active role in the global vaccination campaign over the latter half of 2021 and beyond, as it is low hanging fruit for US strategic objectives. The appointment in April of Gayle Smith as the US coordinator for Global COVID Response is a key indicator that the US is preparing for an expanded vaccine diplomacy push. Complementing potential increases in vaccine diplomacy, the US has already committed $4 billion for WHO's COVID-19 Vaccine Global Access Facility (COVAX) pooled-procurement framework.

Serum Institute of India's disruption of export licenses could result in a production shift to Europe, North America

India, which is being hit by a big new surge in infections, has suspended export licenses for COVID-19 vaccines, which has disrupted the supply of AstraZeneca's AZD1222 manufactured by the Serum Institute of India (SII). SII provides contract manufacturing for some batches of the AstraZeneca vaccine AZD1222, as well as other vaccines including Novavax's. In addition, SII manufactures AZD1222 under license, under the Covishield brand, for supply to the global COVAX program.

The SII export delays will affect not only low-income countries, which access the vaccine via COVAX but also European countries, as some supplies of the AZD1222 vaccine come from the SII facilities in India. The Indian government's move may provide a temporary supply boost for India, but in the medium term may affect Western companies' willingness to sign vaccine manufacturing contracts with SII and other Indian contract manufacturers. In the long term, concerns over the safety of contract manufacturing agreements may lead to a radical restructuring of global supply chains, resulting in production being moved to high-cost sites in Europe and North America and away from the lost-cost manufacturing sites in India and China.