The Returning spectre – beyond IMO2020

From 2008 to 2015, some 2.1 million barrels/day (b/d) of refinery distillation capacity in Europe was closed. A combination of weak local demand, grass-root investments in Asia and the Middle East and the resulting poor margin environment proved too challenging for several operators. Since then, generally higher margins, helped by strong demand growth and falling oil prices, have provided much needed support for the industry, and upcoming changes to the International Maritime Organization (IMO) bunker fuel specification are expected to lift margins further in 2020.

However, after a temporary uplift in 2020-2021, the benefits of the IMO changes are expected to fade. The industry worldwide will likely face a severe, challenging business environment as demand growth reaches a plateau, and refineries - especially in Europe - will once again be under threat and facing potential rationalization.

European crude distillation capacity was broadly constant throughout the 1990s and early 2000s, at approximately 17.0 million b/d. Several projects were initiated not only to meet tighter fuel specifications in 2000 and 2005 but also to increase the overall yield of lighter products.

This period also witnessed rapid economic growth in China, with annual GDP rates of over 10% and refined product demand increases that affected global supply-demand balances significantly. Although demand for gasoline and middle distillates increased considerably demand for heavy fuel oil continued to decline, resulting in price spreads between light and heavy products widening. This lifted margins for conversion units such as fluid catalytic cracking units, hydrocracking units, and cokers, but placed enormous pressure on simple hydroskimming operations, especially those too small to upgrade their way to improved profitability.

This environment persisted for some eight years. Annual average gross hydroskimming margins, as measured by IHS Markit's Northwest Europe (NWE) Brent Hydroskimming benchmark, were negative almost every year from 2006-2014, such that the severity and length of the simple margin downturn proved too great for many of these operations to survive.

The respite: falling oil prices, then the IMO scramble

The collapse in crude oil prices from late 2014 into 2015 proved to be a catalyst for a reinvigorated downstream industry. With many upstream projects facing uncertain financial returns, several companies showed a renewed interest in both refining and retail. Further, the drop in absolute prices helped to raise demand for road fuels: in the United States, for example, gasoline demand over the period November 2014 to June 2015 increased by 9% compared with the same period 12 months prior. This time of renewed growth lifted margins and effectively ended the period of rationalization.

The IMO specification changes in January 2020 also are expected to benefit the industry. IHS Markit views an increase in refining crude oil runs as essential to meet an expected increase in demand for middle distillates and to help optimize utilization rates of downstream cracking units, as intermediate streams are diverted to help produce new 0.5% sulfur bunker fuels. This is expected to result in positive price signals and margin increases over the next 12 months, for almost all refining configurations.

When the party ends, the clearing-up begins

History shows that a change in fuel specifications is often followed by a short-term shift in pricing relationships. Markets tend to place a premium on the higher-grade product over the marginal manufacturing cost to encourage supply, but as production increases and supply-demand balances adjust such premiums disappear. This pattern, we believe, is also probable with the IMO transition.

The likely disruptions to crude and product price relationships from late 2019 are expected to be over by the end of 2022, and refined product price spreads, relative to crude and to each other, to return broadly to current levels from 2023 onwards. Refiners will then be facing slowing demand growth owing to the increasingly efficient use of conventional transportation fuels, and most likely by 2036 a decline in absolute demand levels. Furthermore, we anticipate the addition of some 4.5 million b/d of distillation capacity worldwide between 2020 and 2025, and a further 6.7 million b/d of capacity to be required by 2035 in non-OECD markets such as the Middle East, India, China and other parts of Asia.

With over 11.0 million b/d of additional grassroots distillation capacity, certain refineries will come under pressure as margins ease. The most vulnerable - and most likely to close - will be in regions with mature or declining refined product demand, especially those with relatively high fixed costs and fuel costs. 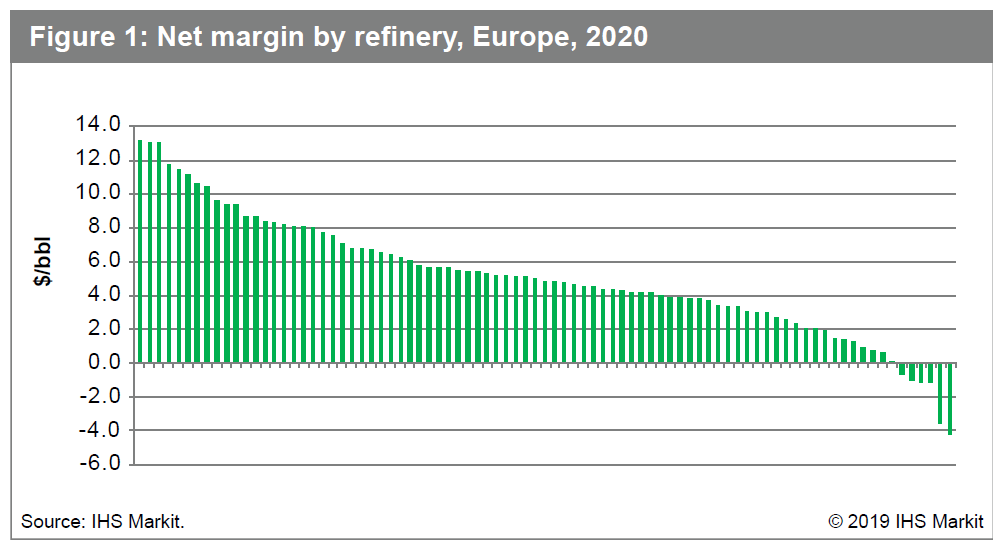 From 2020 to 2035, IHS Markit projects a decline in crude runs in OECD Asia of 1.2 million b/d, and in Europe of 2.2 million b/d - a possible return to 2008-2015 conditions. And although an overall decline in crude runs may be indicative of poor regional competitiveness, for industry players such as refiners, trading companies, ports, and engineering and construction companies, the ability to identify vulnerable refineries is a valuable strategic asset. For this reason, the use of the Refinery Cost and Margin Analytics (RCMA) tool can be particularly beneficial. Figure 1 shows the projected margin - net of operating, variable, and fixed costs - for individual refineries in Europe in 2020. The IMO transition is expected to benefit nearly all refiners, with all but six refineries returning a positive net margin. In the longer term, as margins deteriorate, the increase in the number of vulnerable European refineries is clear. Using 2027 as a snapshot example, 29 refineries are projected to have a negative net margin, representing a total of 3.7 million b/d of distillation capacity or 25% of the current installed base. 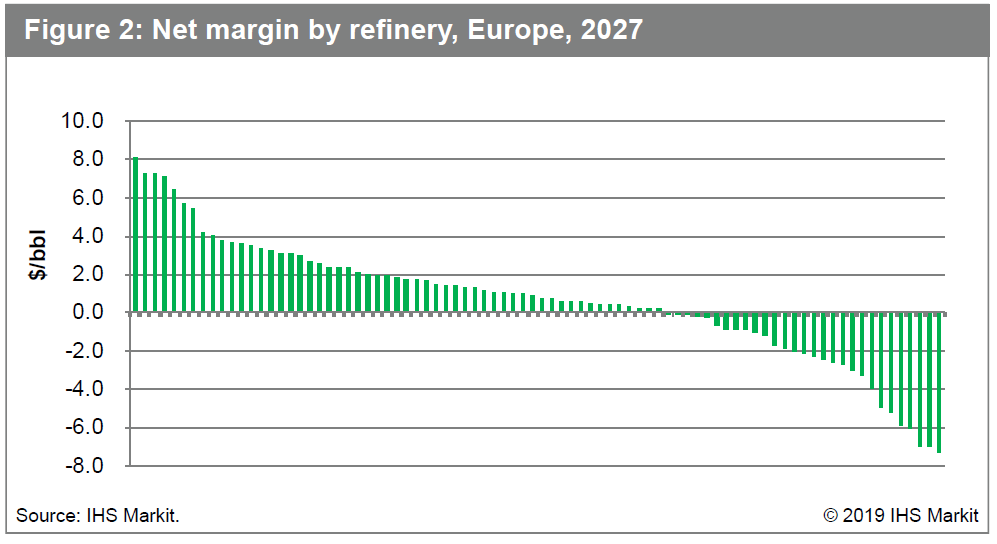 Where next? Beyond the trade impasse

Although demand for refined products is approaching a peak, demand for chemicals is projected to grow strongly beyond 2030. For refiners, petrochemical integration represents not only an opportunity to improve profitability by capturing the value of chemicals, but also helps secure national supply compared with over-reliance on imports - an important consideration in the current geopolitical climate. However, the current trade impasse is unlikely to continue for a protracted period, and in due course some normalization is expected. The addition of crude-to-chemicals plants in China will only add to competition, thus increasing pressure on more basic refinery-chemical operations.

At a time when attention is on the benefits of the IMO specification changes it seems incongruous to suggest a return to poor refinery profitability and the increasing likelihood of closures. But the IMO party will be over all too soon and many refineries will struggle to break even. The spectre of rationalization will return.

Damian Kennaby is a executive director at IHS Markit.