The recent surprisingly expensive FPSO bids in Brazil, are actually the new normal

In June 2021 Petrobras ordered by $2.3 billion a new FPSO (P-79) from Saipem and Korea's DSME, designed to process 180,000 bd of oil and 7.2 MMm3/d of gas. The FPSO will be supplied from an EPC (engineering, procurement, and construction) contracting modality, making the return of Petrobras to owning and operating its FPSOs after a long time only hiring in lease contracts.

In June 2022, Petrobras made another EPC contract bidding for two new FPSOs (P-80 and P-82). Keppel offered S$2.98 billion for each new FPSOs, beating Sembcorp Marine Rigs & Floaters' offer of US$3.66 billion and US$3.73 billion respectively. Both are planned to start production in Santos Basin in 2026. They will have oil production capacity of 225,000 bd and natural gas processing for of 12 MMm3/d.

In late May 2022, Petrobras, surprised by the price and conditions, canceled a tender for the FPSO to Sergipe Águas Profundas (with 120 mil b/d of oil processing and 8 MMm³/d of gas exporting), in a similar model of contract, the BOT (Build Operate Transfer). Only one company placed an offer, the Brazilian contractor Ocyan. For almost US$ 4 billion it included the EPC of the unit and 4 years of operation. The proposal also had conditions regarding the war between Russia and Ukraine.

Even considering the differences by size of the units, it is fair to say that Petrobras was surprised by the bidding prices. Petrobras executives declared in an interview that the bidding model was being reviewed to understand why the company received so few offers and why the prices were so high.

It is worth noting that Petrobras's move from leasing models to EPCI and BOT contracts is in line with the market. As featured in IHS Markit's Leased vs Owned insight research last year, the main leasing companies SBM and MODEC's have a full backlog for upcoming years and with the high demand, contract prices have increased significantly. So, it stands to reason that the model contract is not the issue for the high prices and few offers received.

The leasing companies are not the only ones with a stacked backlog in this market. Many shipyards are also running close to the capacity. Although the global construction capacity of large hulls grew by almost 40% between 2015 and 2020, the utilization rate jumped from 50% on average between those years to 70% in 2021 and 2022. And IHS Markit projects an even tighter scenario in the coming years. Frequent choice for the pre-salt FPSOs, Chinese SWS, CMHI and DSIC yards are committed with SBM's and MODEC's standard hulls respectively. In South Korea, DSME is fully booked while Singapore yards are more suited for integration work than hull construction for large units. Capacity, although much tighter now, is still available to Petrobras, but at the right price. 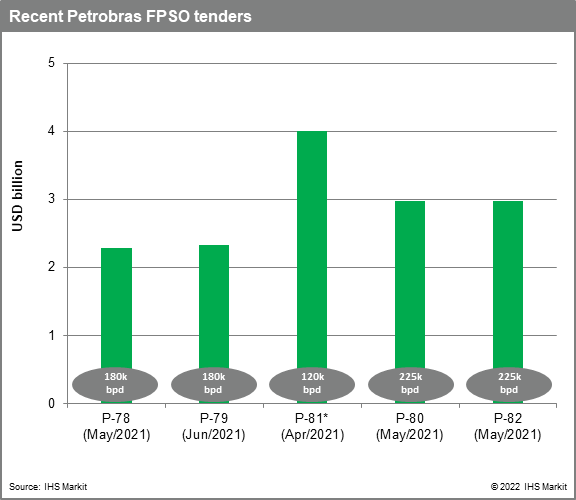 Several factors stack up to understand the spike in the prices. Beginning with the pandemics outbreak, it caused major disruptions in the economic activity and the supply chains worldwide. To sustain their economies and minimize the impacts on the population, many governments created or boosted their income transfer programs, and central banks strongly expanded the monetary base. The result was a boost in demand. Meanwhile, the highly integrated global economy activity struggled to recover from the disruptions in the first place while still suffering from local outbreaks that interrupted the production from raw materials to intermediary products. For instance, according to IHS Markit's surveys of purchasing managers output constrained by shortages was 3.5 times higher in early 2022 than the long-run average. These topics are well covered in the whitepaper The Great Supply Chain Disruption by IHS Markit (now part of S&P).

Naturally, this mismatch between supply and demand boosted inflation. For the specific case of the FPSO industry, it resulted in a huge spike in the steel prices and in labor costs. The cost to mitigate the high level of uncertainty was also priced in. More complex contracts and negotiations are a reality, insurance, and other financial tools such as hedges against exchange rate risk also add costs. 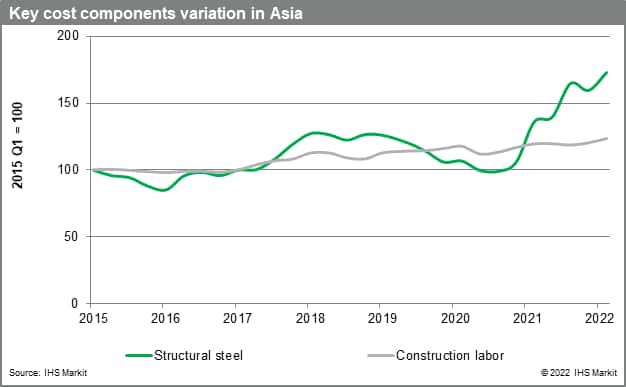 To counter the inflation, many central banks started tightening their monetary policy, therefore increasing the cost of lending. The result right now for capital intensive projects are a cost escalation that remains high while the cost of financing sharply increased and is likely to keep increasing for a while.

Parallel to the unfolding of the COVID-19 story and its aftermaths, another huge event came into play: the Russian invasion of Ukraine. The massive wave of sanctions from western countries to Russia and the destruction Ukraine's production capacity - or at least break of production, removed from the market two key producers of raw materials, adding even more inflationary pressure. Particularly for the shipbuilding industry the two countries combined were responsible for over 50% of the global pig iron exports, and 7% of steel in 2020.

The sanctions on Russia's oil & gas production hit the whole supply chain. The average spot price of natural gas in China increased by 40% between 2021 and the first half of 2022, and IHS Markit projects it will close the year with a 70% increase. The producer price index of electricity and refined products in that country also spiked by 8% and 17% respectively. So as much as Petrobras try to attract more offers and lower construction costs, it is unlikely that the company will make significant progress for the next tenders. The scenario that the company has found in the last bids may be the new normal, for all the new FPSO projects irrespective the operator.