Article: The problem with lemons and lemon juice

This summer, the world is being scoured for supplies of fresh lemons as demand has spiked. This is due, of course, to the Covid-19 pandemic. Lemon juice, like all citrus fruit juices and some others, is being sought because its vitamin C content boosts immune systems and thus may provide some form of protection against the coronavirus.

A year ago, Spain's lemon industry was facing disaster because of a massive crop which depressed prices. The sector lost an estimated EUR200 million (USD174 mln) and half a million tonnes of fruit were left to rot in the fields. Now, it faces competition from Argentina.

Argentina produces about 1.6 mln tonnes of fresh lemons annually, of which about 300,000 tonnes are exported, earning the country more than USD800 mln from this segment. However, Argentina majors in processed lemon (mainly juice and essential oil), made in 14 lemon processing plants and exporting industries situated in Tucumán, Salta and Jujuy. This year, about 1.12 mln tonnes of fruit should have been processed.

Along with the wine industry, lemon is one of the country's key agro-industries and (like the wine industry) is very well managed and able to compete effectively on global markets. "Unique among Argentine fruit and speciality crop sectors is its ability to weather the economic and financial crises which have affected the country," the USDA commented earlier this year.

Paradoxically, lemon juice remains extremely cheap. Huge Argentine production last season (1.8 mln tonnes or 200,000 tonnes more than expected) has left the country holding large stocks and these are pushing prices down. Argentina's new season's harvest is approaching, but the country really needs to clear inventory, and it is doing this. Its juice exports were the second-highest in history at some 61,600 tonnes. So far this year, exports are only slightly lower over the January-June period (the latest data available).

Spain is worried because Argentine lemon juice concentrate is now cheap enough to compete in Europe against Spanish production. And so it should: 5,280 tonnes of Argentina juice have come into the EU up to end April (the most recent data) , more than double the volume in January-April last year. Its lemon juice is subject to a 14.4% duty into the EU, which acts as a constraint, but this year is different. Even with duty and port charges added, Argentine lemon juice is presently priced around USD2,000 per tonne duty paid ex-dock Rotterdam.

Nevertheless, something has to be done to bring the country's juice inventory down and prices up. Only a few years ago, Argentine 400gpl concentrate was over USD3,000/tonne fob. That was during a period of shortage and so the prices were unnaturally high but, realistically, Argentina needs to add another USD500/tonne to its present minimum export price of around USD1,650/tonne fob.

IHS Markit expects a production cut in the coming season. This will come from two directions. The first is that processors are very likely to limit the amount of juice they produce, even to the extent of closing processing plants. The second is that they are finding the fresh lemon industry much more lucrative.

Citrusvil from Tucumán has announced that it expects to export 35,000 pallets of lemons this season, especially as its groves this year are carrying higher quality fruit. So far this season, the citrus company has already made its first shipments to many markets including Russia, Ukraine, Canada, as well as to buyers in the Far and Middle East.

Luckily for Citrusvil, its export campaign has coincided with a slowdown in fresh lemon exports from Spain. It is also selling more fresh fruit into the US and expects to triple its exports from last year's 2,000 tonnes. Granted, 6,000 tonnes is not a vast volume, but the company is supplying from a newly FDA-approved plant that has been upgraded and is now dedicated to supplying the US only.

Half a dozen years ago, Argentina decided to focus attention on its fresh fruit export markets and started a programme to improve its lemon quality and the attractiveness of the fruit to foreign markets. This has turned out to be a far-sighted decision. Its 'All lemon' promotion and export quality certification now covers about 85% of the country's lemons and has been a great success.

Consider the situation of Spain now. Here, its lemon production is mostly intended for the fresh market. Last year, it exported about 31,500 tonnes of juice concentrate, about half what Argentina managed. On the other hand, Spain is much more effective in not from concentrate juice: it exported 32,730 tonnes of NFC lemon juice in January-April this year, while Argentina is just not in this market: it exported a handful of tonnes, mostly to Chile. NFC juice is probably more profitable for Spain than concentrate, too.

Spain's position in the fresh sector is probably unassailable, but any competition that nibbles away at its juice market share deserves to be taken seriously. Italy is a niche producer of lemon concentrate now (exports of a few thousand tonnes annually) but it actually sells more NFC juice than Spain: 57,000 tonnes in 2009 and the same amount in 2018, and a consistent increase over the years from 22,000 tonnes in 2004. With Argentina applying pressure in the concentrate market and Italy doing the same in NFC juice, Spain needs to consider what it can do to fight back.

Last year, the EU agreed on a promotional support package for Spanish citrus to help it fight against competition from other lemon suppliers such as Turkey, Argentina, and South Africa.

The increased global demand for citrus means that other countries are also looking at ways of supporting their industries through the pandemic. Juan Manzur, governor of Argentina's north-western Tucumán province, has met with Argentina's citrus growers' and industry association Asociación Citrícola del Noroeste Argentino (ACNOA) to discuss emerging problems and financing options for the local citrus processing industry. One project is to secure sufficient resources to set up a 'counter-cyclical' fund for the citrus industry, to cope with the global recession that looks set to follow the pandemic. Argentina does not want to see its industry damaged.

Chile, while it does not produce lemon juice, has negotiated a bilateral phytosanitary agreement with China that allows its fresh citrus fruit to be sold there. Chile exported some 90,000 tonnes of fresh lemons, mostly to the US and Japan, last year, but the world knows how focused its agro-industry is and Chile will surely increase its export tonnage. Uruguay has announced that it intends to increase its citrus exports to the US by a up to a quarter this year - the US already takes most of its lemon oil. It has also recently signed an agreement to export fresh lemons to Vietnam.

With production cutbacks in Argentina and a smaller harvest in Spain (down to around 1.0 mln tonnes), prices for both processed and fresh lemon should strengthen. At a time of increased demand, this is good news. 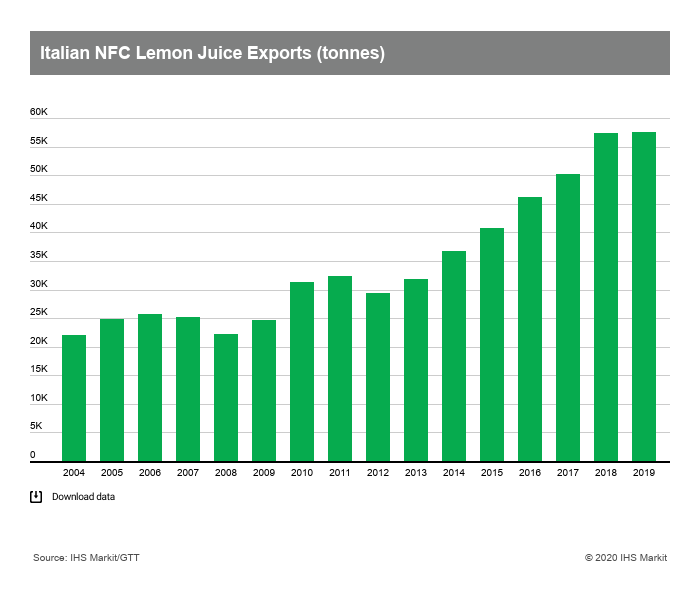