In 2013, Mexico overtook the US in the not-so-glamorous race as the "most obese country in the world". Though this was perhaps one of the very few occasions when we were happily yielding the title to someone else, it is not a guilt-free pass to start enjoying pizzas and sodas in your couch every Friday night. In fact, in a recent Gallup poll, the percentage of U.S. adults who are obese (Body Mass Index, BMI, of 30 or higher) continued to trend upward in 2014, reaching 27.7%. This marks a more than 2% increase from 2008's 25.5%. What make matters worse is more Americans are now classified as morbidly obese (BMI of 40.0 or higher). The same Gallup poll reported the highest level of morbidly obese prevalence since it started tracking 7 years ago.

Roadblocks to greater public awareness and action
In the face of obesity epidemic, we are not sitting still. The Department of Health and Human Services has made reducing obesity an official goal in its "Healthy People 2020" plan. Novo Nordisk recently launched the weight loss drug Saxenda® in the US, and may introduce the product in other markets in the near future.

However, there are still roadblocks to greater public action on obesity. Firstly, obesity is a chronic condition, which means the 'wear and tear' on people's health may not manifest until after many years, by which time some of the damage cannot be reversed. Moreover, obesity is a 'gateway' condition that increases the risk of comorbidities such as diabetes, cardiovascular diseases (myocardial infarction, stroke, congestive heart failure, etc.), depression, sleep apnea, and many others. Last but not the least, current research on obesity doesn't "strike a chord" with the general public. We need a value message that is succinct and cuts right into the heart of public concerns.

Microsimulation modeling on the economics of obesity
Accurately accounting for the economic consequences of obesity's comorbidities is key in unveiling the true nature of this chronic disease and thereby raising public awareness. Using our proprietary and validated Disease Prevention Microsimulation Model (DPMM), we simulated the onset of more than 30 conditions on an individual basis over 10 years. 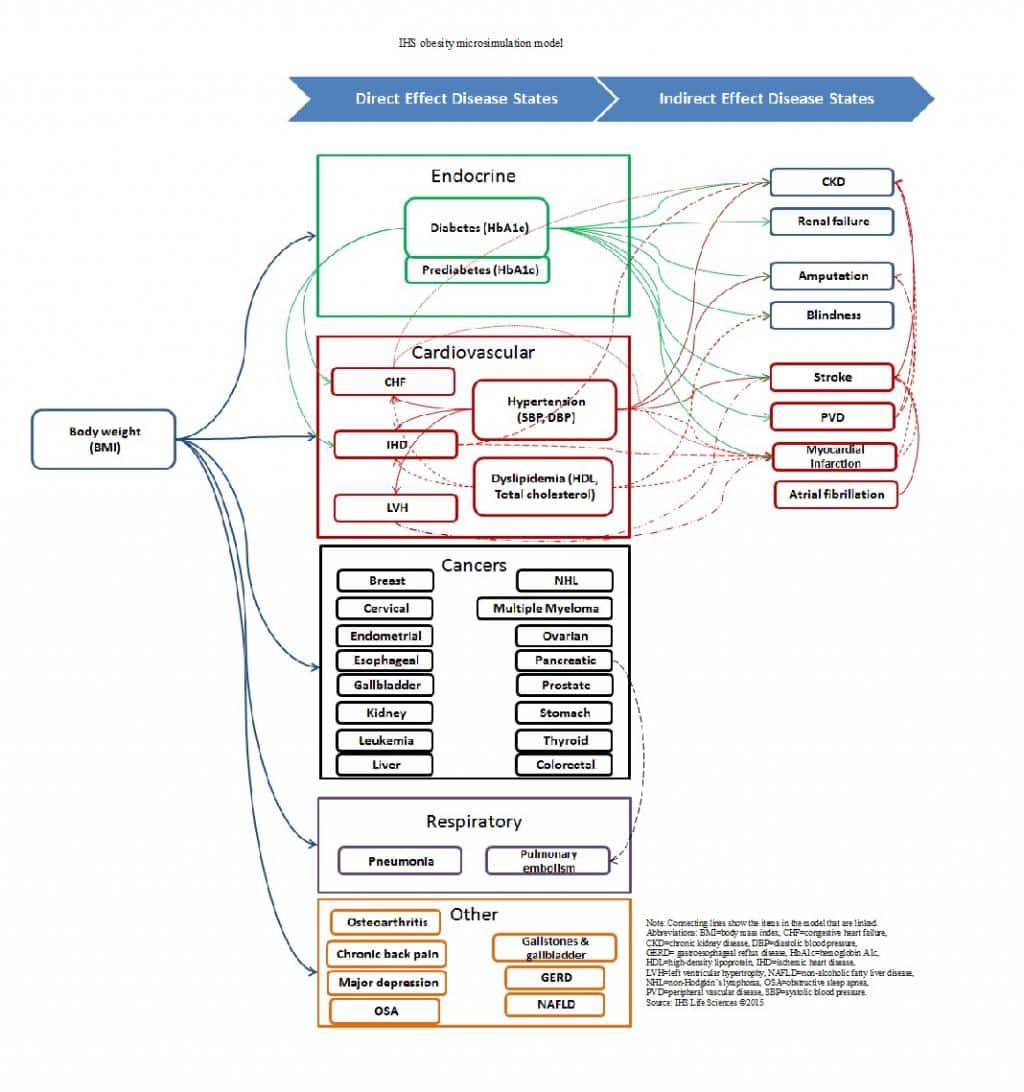 The risk factors of each condition is tied to a person's medical history, demographics (age, sex, race), and biometrics such as BMI, blood pressure, cholesterol level, blood glucose, and so on. All the risk factors are updated frequently in the simulation to reflect the ever changing prognosis of this person's health.

For the model prediction to be nationally representative, we studied records of 5,221 obese adults from 2005-2012 National Health and Nutrition Examination Survey (NHANES). The direct medical cost of this obese population is compared against that of another normal-weight population drawing from the same NHANES dataset with matching demographics.

The price tag of obesity
What we found is astonishing - compared to a similar normal-weight individual, every extra pound of weight for an average obese person in the US translates to a $63.49 increase in direct annual medical cost, covering physician office visits, prescription drugs, surgeries, and other direct medical services. "Burden of obesity" should never be a term in academic research only. It needs to be something each of us can think about and connect with in our everyday life, which will in turn lead to wider public actions to tackle obesity. Though our analysis is based in the US, similar studies can be carried out with proper population data in other countries.

So, the price tag for every pound of extra weight is, on average, $63.49 every year. The price tag will get even heftier as a person grows older, or becomes more obese. It turns out investing in your health will pay for itself after all.