The Permian Basin: A magnet for risk capital

In the United States, as uncertainty around the outlook for oil and gas prices started to dissipate in late 2016, capital investment began to climb (See Figure 1), M&A activity accelerated and the rig count started to increase. The IHS Markit energy team anticipates that US crude production will rise by over 500,000 barrels per day in 2017 with the Permian Basin supporting the entire production growth wedge. 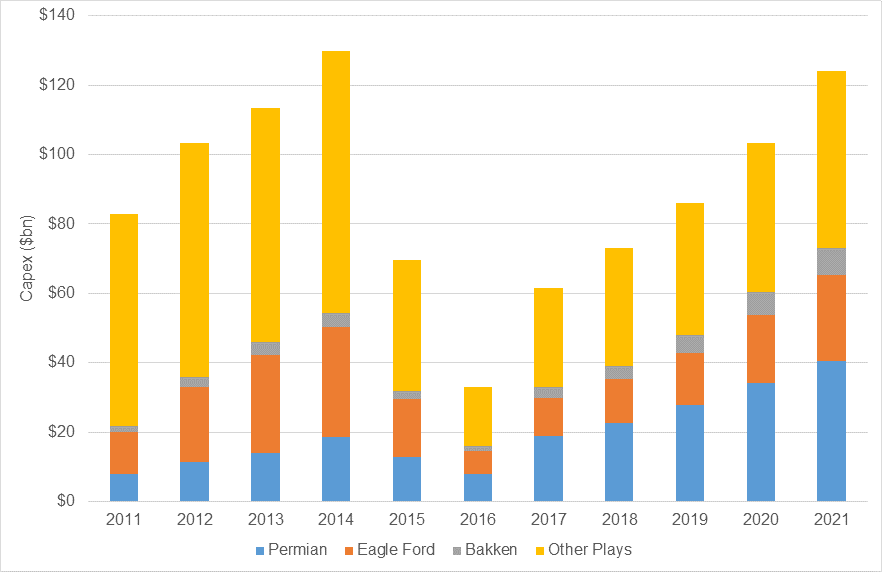 Figure 1 - Estimated annual capital spending in the Eagle Ford, Bakken, Permian, and other US Lower 48 onshore plays between 2011 and 2021

Ironically, the role of the Permian Basin as the engine of US liquids supply growth only became apparent in 2014 as the price of oil began to fall. What factors enabled a declining conventional basin to emerge as a Super Basin and become the driver of both unconventional and total liquids production in North America during the downturn?

IHS Markit Energy defines a Super Basin as having cumulative production of more than 5 billion boe, with 5 billion boe of recoverable reserves remaining, two or more source rocks, multiple stacked pay zones, existing infrastructure with access to markets and an established service sector and supply chains. The Permian Basin began its transformation from a declining conventional basin into a Super Basin in 2012 with the shift to horizontal drilling. According to IHS Markit Senior Research Director, Dr. Pete Stark, "Using a mass balance approach to estimate recoverable oil from the 45 producing formations in the Permian Basin using horizontal drilling technology, IHS Markit estimates the basin has the potential to recover almost twice as much additional oil as has been produced to date - about 38 billion barrels cumulative liquids."

While the shift to horizontal drilling exposed the potential of the Permian as a Super Basin, operator experience and development timing cemented the Permian's position as the engine of US liquids supply growth in 2017. Most if not all of the core operators in the Permian either had significant prior conventional experience in the basin or unconventional experience in other US onshore plays before initiating Permian unconventional development programs (See Figure 2). In the Permian operators such as Occidental, Apache, and Concho had established positions and extensive geologic knowledge of the basin prior to the onset of horizontal drilling while Pioneer, EOG, Devon, and BHP Billiton were able to leverage their experience optimizing lateral length and proppant loads in the Eagle Ford to accelerate the learning curve when they moved into the Permian. 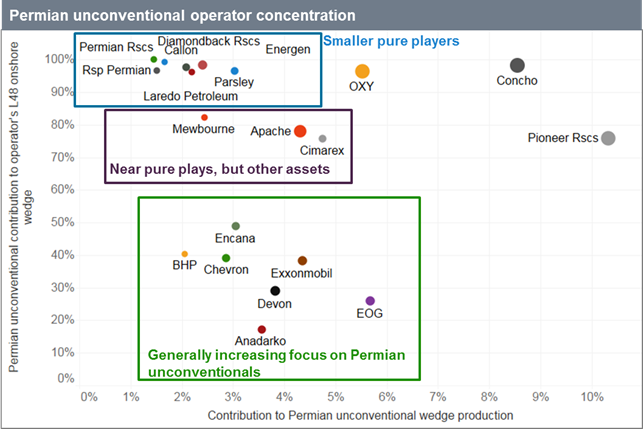 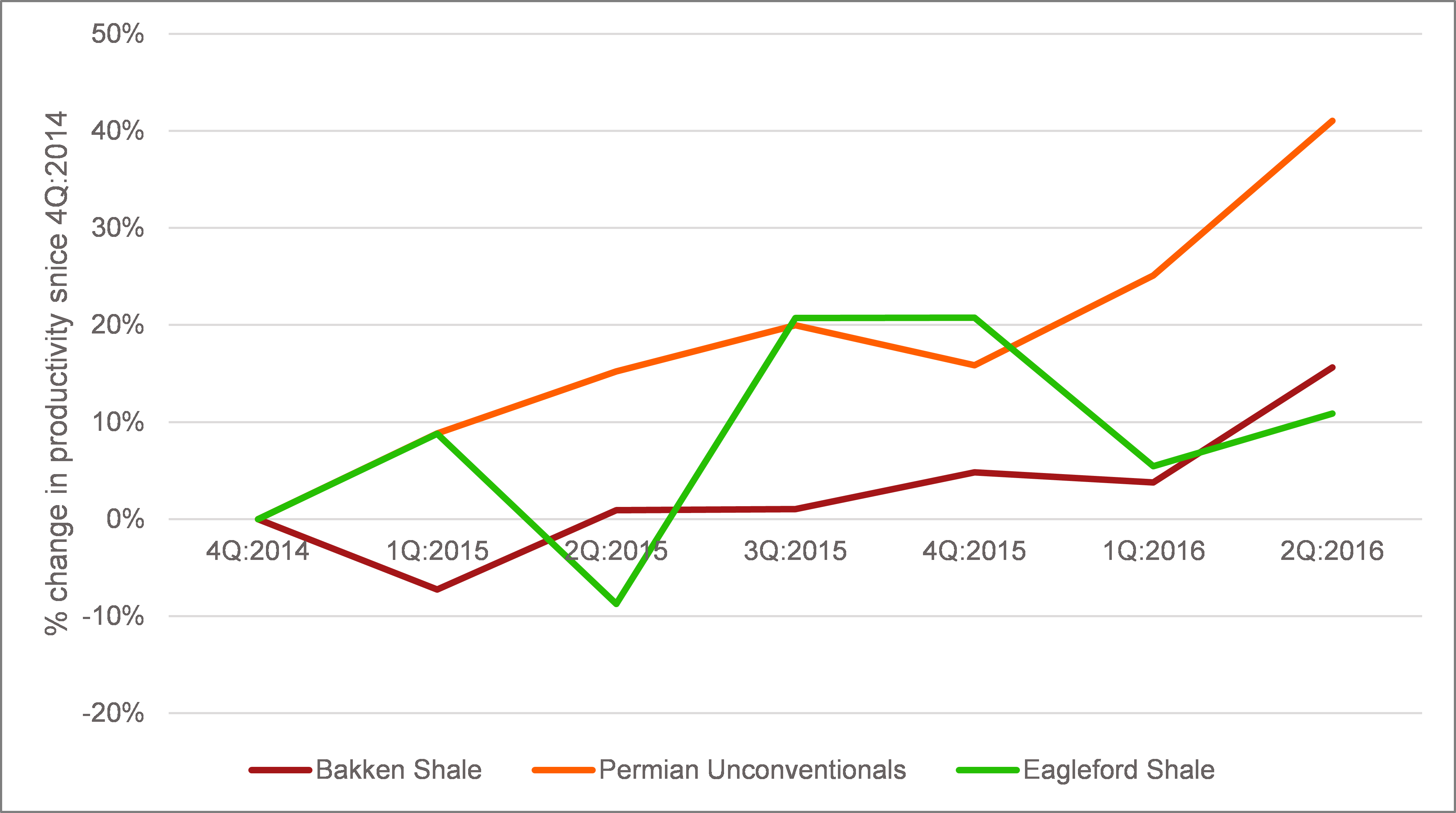 Figure 3 - Percent change in average well productivity in the Bakken, Eagle Ford and Permian since 4Q:2014

With leading operators in the Permian continuing to adjust well configurations and completion practices and to target different benches over time, IHS Markit Energy expects per well productivity in the basin to continue to improve, though with diminishing gains. Productivity increases combined with high levels of drilling activity are expected to increase Permian production by 700,000 barrels per day in 2017 and grow total liquids output to over 4 million barrels per day by 2021. Post-2021, productivity growth will be labored but total basin production should continue to climb, adding another 500,000 barrels per day by the mid-2020's.

Of course, not all Permian players were able to survive the downturn. Many smaller companies - particularly those with acreage outside of the tight oil fairways or those with stripper well operations or secondary recovery projects -- have struggled. As a result, the number of companies who have invested capital in the basin has decreased by nearly 70% since the end of 2014. Operator attrition has been compounded by some companies with ready access to capital making significant strategic bets on the basin via high-profile acquisitions. The Permian is now the established premier upstream M&A target in the United States with 2016 transaction value reaching $25.6 billion, accounting for 41% of total US upstream deal value. And, the level of M&A activity in the Permian only looks to accelerate in 2017 with total transaction value already exceeding $11.0 billion before the end of January.

As operator optimism continues to grow alongside improving well and financial performance, IHS Markit Energy expects development activity to continue to increase until it reaches over 200 rigs per day in mid-2018. Although a modest rebound in service industry costs and potential midstream infrastructure constraints in 2019 could impact development, the already impressive break-even economics, abundant geological opportunities, established development parameters and stable to improving oil market conditions are expected to reinforce interest in the basin for the foreseeable future.

Looking for more insights on the Permian? Meet Reed Olmstead at the 2017 NAPE Summit on Feb. 16. Stop by our booth for details.