The Permian and natural gas – the developing constraint and producer options

Natural gas production in the Permian Basin is growing rapidly along with oil. Dry natural gas production increased during 2016 by nearly 900 Mmcfd, reaching almost 6.2 Bcf per day by December. During most of 2016, no evidence emerged of any constraint in gas pipeline capacity leaving the Permian, as gas price differentials west-east across Texas remained relatively narrow early in the year. For the first half of 2016, basis spreads west-east across Texas (Waha-Katy) averaged only $.09, versus $.10 a year earlier. Conditions began to change however, during the second half of last year, and spreads began to widen, with the second-half 2016 average spread reaching $.14, and a peak of $.33 reached last October, the widest monthly Waha-Katy spread spread since 2010. Production growth had begun to make a difference. Thus far in 2017, differentials have continued to widen, averaging $.20, with April on track to match or exceed last October's $.33 (see Figure 1 below). 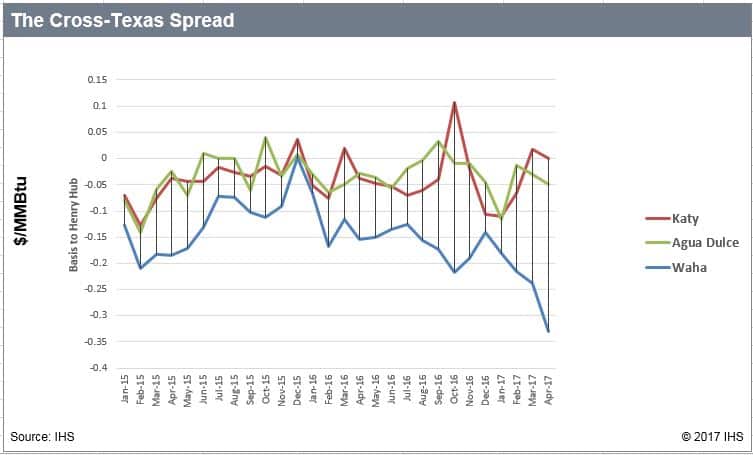 Production growth is just getting started though, and with strong oil-directed drilling and economics, producers are examining their options for adding new gas pipeline capacity from the Permian. IHS Markit's Supply Forecasting and North American Gas teams expect gas production to continue to grow rapidly, with growth during 2017 exceeding 1.5 Bcfd, and total production reaching 8 Bcfd on a monthly basis by January of next year. From that point, growth averages 0.9 Bcfd annually (faster in earlier years) until production reaches a plateau of 14.5 - 15.0 Bcfd in the late 2020s, more than double its current level (see Figure 2 below). 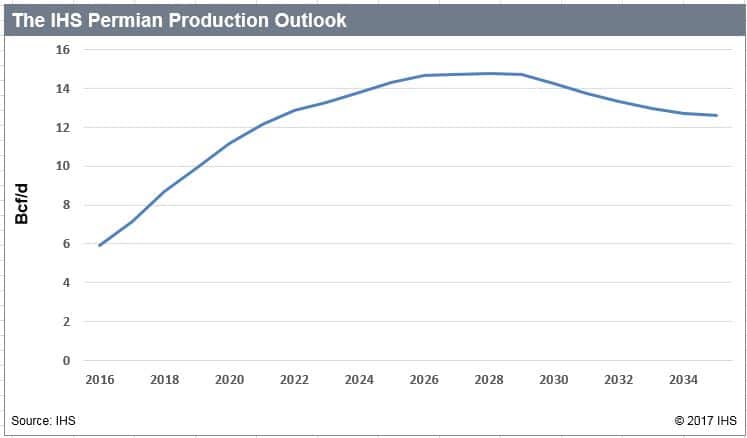 With production set to grow rapidly, and pricing differentials already beginning to reflect increasing use of exit capacity, producers face a common dilemma - when will pipeline constraints develop and begin to materially affect netbacks, and what are the best destination markets for new capacity?

When will pipeline constraints begin to hurt Permian netbacks?

Pipeline constraints begin to drive wider basis differentials (as recorded in monthly spot price averages) as average monthly utilization of available capacity exceeds 80%, with differentials growing exponentially with utilization beyond that point. So long as the use of exit capacity remains below 80%, however, spot price differentials often increase slowly, if at all. These algorithms are contained within the Gas Pipeline Competition model (GPCM) developed by RBAC Corp, which the North American Gas team uses for purposes of modeling gas price changes as North American supply, demand, and flow change over time.

However, measuring effective exit pipeline capacity from the Permian is more complicated than it might seem. First, capacity reporting is not required for intrastate pipelines running east from the Permian across Texas, and these pipes (owned by Energy Transfer, Enterprise, OneOk, and Atmos) provide critical marginal capacity to the producers.

Wolfgang Moeller, the western regional analyst in the North American Gas team, has compiled the following estimates of exit capacity, which are contained within the team's GPCM model. Exit capacity as assumed earlier this year grows by approximately 6 Bcfd between 2016 and 2025, with 2.4 Bcfd of that already completed to Mexico, and 1.5 Bcfd occurring to the east through assumed expansions of existing systems. 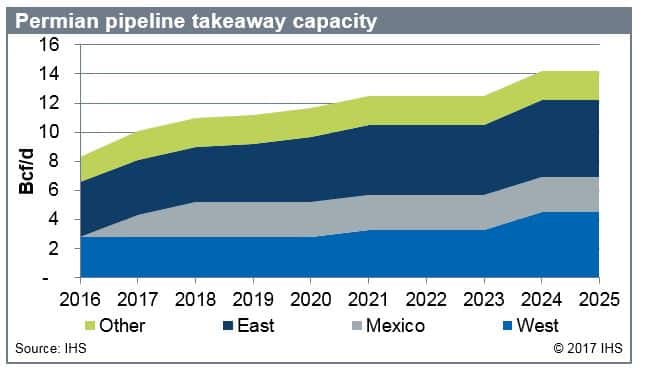 IHS Markit also assumes that expansions occur to the west as well, in order to satisfy demand pressure that builds over time. With declining San Juan and Rockies production, growth in Mexico exports out of Arizona, and growing power generation demand in the Desert Southwest and northern Mexico, unless some expansions to the west from the Permian do happen, prices eventually begin to spike in the Desert Southwest and southern California. However, pipe capacity to Mexico and to the west can be used only as demand allows, so normal utilization metrics do not necessarily apply. As a result, IHS Markit expects exit capacity to become constrained, and spreads to widen significantly, beginning as early as late 2017 and certainly in 2018 (See Figure 4 below).

Are the expected expansions enough? At the peak of Permian production, perhaps not, but longer term should production begin to decline as expected, yes. This pattern is illustrated in IHS Markit's basis outlooks for the Katy Hub and the El Paso Permian zone (which would track at a slight discount to Waha), and these spreads are illustrated below. 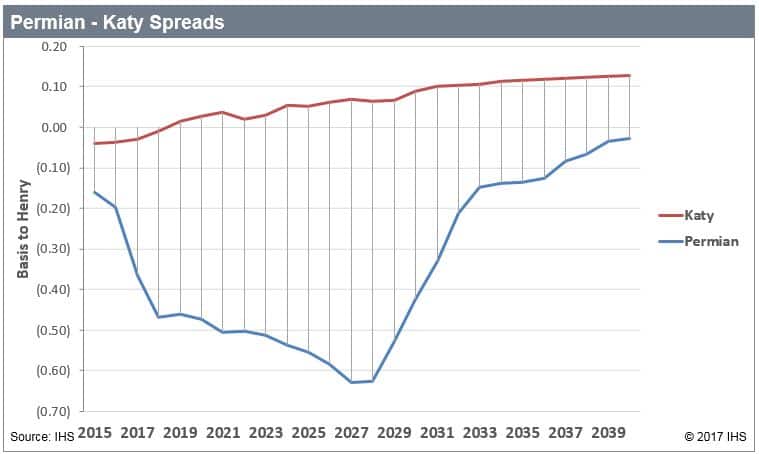 The widest differentials, which occur as Permian production peaks, reach approximately $.70, a level that would clearly encourage added pipeline capacity, but not for very many years. New pipeline build is likely to cost an estimated $.55 - $.75/MMBtu, depending on the ultimate cost per mile of construction, using a capacity of 1.5 Bcf per day.

Pipeline developers will have their own ideas, however, as will producers. Producers will need to dispose of the gas, and netbacks available from the Permian, even at peak spreads, would allow positive economic contribution from wells and production which are driven by oil economics. As such, pipeline developers have stepped forward to offer capacity to the east, with 3 projects competing to serve producers and offer added exit capacity - a physical hedge against these wide spreads. Even if producers may "lose" money on the pipes themselves as the spreads tighten after completion, IHS Markit expects at least one of these projects to move forward, as these pipes will be critical enablers of overall production growth from the basin.

The two most specific proposals, Gulf Coast Express and Pecos trail listed below, would run this pipeline to the Agua Dulce hub near Corpus Christi, from which producers can access pipelines to Mexico, LNG exports from the Cheniere LNG facility under construction, and the legacy south Texas pipeline network. The Waha hub is the entry point for the major existing pipes across Texas, and would be the origin point for these expansions as well. The intra-basin expansions are proposed to move gas from various processing plants in the basin to the Waha exit point. 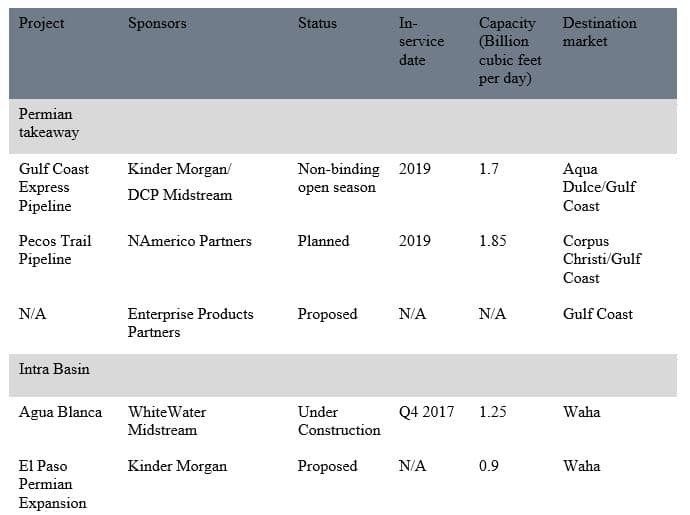 It appears that with production on a rapid growth path - depending on oil prices - and gas basis differentials already expanding, one of the projects is likely to move forward, and if completed by 2019 as proposed would, with the other expansions, largely alleviate the wide basis spreads in our current outlook. As such, IHS Markit's North American Gas team has already determined to include one such project in our outlook going forward. Whether it replaces or adds to the exit capacity already assumed will depend on oil prices, and the accompanying expectations for gas production growth, as well as demand growth in Mexico and the western US. One thing is certain - despite the strong resource base, dynamics in the North American gas marketplace remain interesting, and will continue to change.