The oil price collapse is rewriting the North America oil and gas rulebook—forcing companies into survival mode. The interconnectedness of the industry means impacts ripple throughout the value chain. This downturn has some structural roots - global spare capacity that's been building up over the last couple of years to accommodate the rapid and enormous growth that we've seen in the North American oil and gas production. When we add this spare capacity onto the demand disruption created by the Coronavirus and the oil price war, it means major challenges for North America.

To hear more in-depth analysis directly from our experts, view the on-demand webinar from April 2nd.

Unprecedented Demand Slowdown
While there's plenty of talk about when OPEC and Russia will resume their collaboration, the reality is that it may not matter. Two main factors may overwhelm what they can do. First, the magnitude of the physical imbalance we're looking at in the second quarter, globally, and in North America, and secondly, the distress and how it's feeding from the physical side into the pricing side.

A majority of the pressure we are seeing is coming from demand destruction. Obviously, there was a breakdown of the relationship between Saudi Arabia and Russia earlier this month that led to an all-out surge in production. But, when you look at the grand scheme of the balance in the oil market globally, it's really a demand crash—the scale of which we've never seen before. 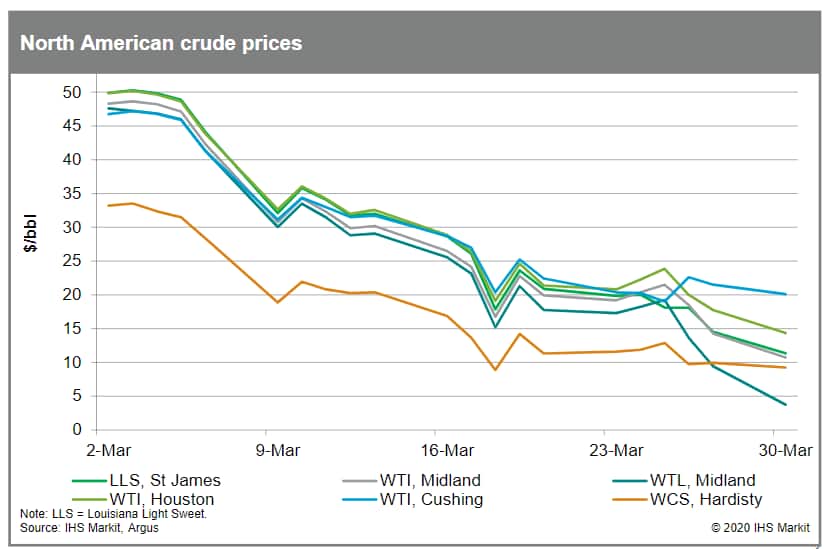 We've also analyzed the impact of country shutdowns in response to coronavirus. This orange and red in the below chart shows you that by the end of March around 86% of global gasoline demand was in countries that have severe or full shutdowns in effect. The global market is slowing down quite dramatically in terms of demand. That scale of a demand drop is creating a balance distress. 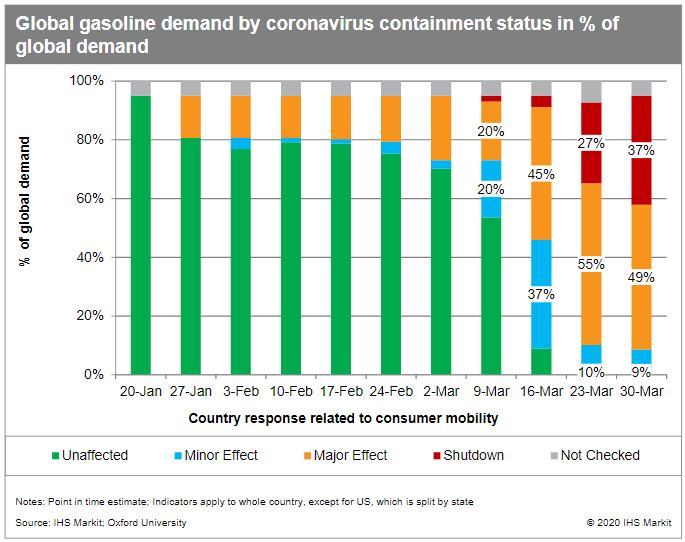 Another consequence of the oversupply is a strain on global storage capacity. We expect to build inventories over the next few months—storage hubs are nearly full and tankers are getting chartered around the world for floating storage. Even more important in the near term is that the daily global surplus exceeds the capability to effectively flow into storage: storage availability thousands of miles away is meaningless if you cannot find a ship or lease the storage.

Operators Shift to Capital Preservation
Coming into this year, early January and February, we were looking at moderate capex cuts compared to 2019—a 13% decline in capex cost. Operators were obsessed with balancing production growth against the cashflow and using any of the accessory cashflow to give back to shareholders.

Now, with March now done, we've seen capex declines go from moderate to significant. We expect now at least a 36% decline in total capex spends in 2020. And, these numbers are going to increase as oil prices continue to fall.

Instead of trying to balance production growth and cashflow generation, we're seeing companies move to capital preservation. That means reducing dividends and eliminating share buyback. There's barely any excess cash out there, so they're not able to give it back to shareholders.

Capital markets have tightened even further. Equity markets have remained closed. And, if you look at yields on fixed income securities for operators out there, they have spiked significantly to abnormal levels. This means that companies, especially smaller ones, are going to have a lot of trouble borrowing money.

The US Supply Trajectory
Given the uncertainty in the market, we've run multiple scenarios for US oil production. Our original base case had supply growing just in the first half of this year and then holding flat for the next 18 months through the end of 2021. In short—we were oversupplied already.

Now, we look at where we are coming in with this amazing unprecedented demand disruption. Estimates are about a two and a half million barrel a day drop this year compared to where we were thinking, and then another million next year. 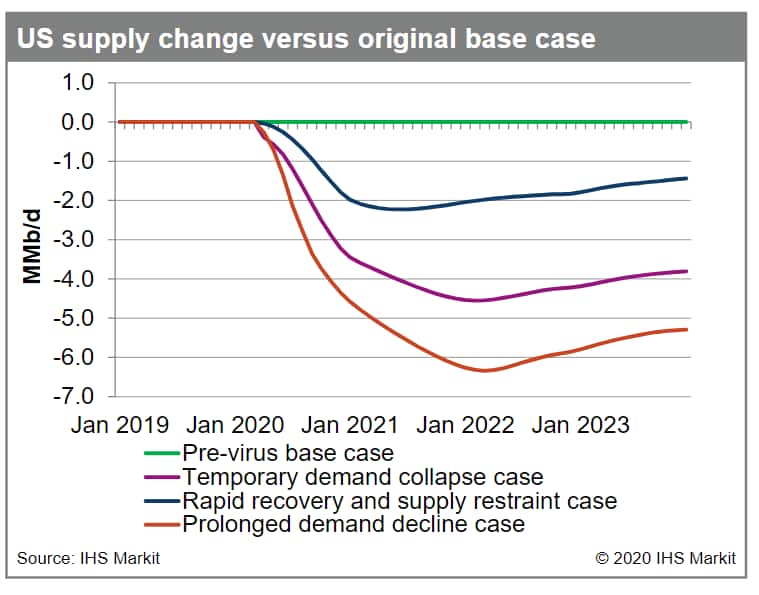 Figure 3: US supply change versus original base case

When we do a play-by-play comparison, the Permian plays register the largest overall production drop by volume. The SCOOP/STACK, Wattenberg, and Eagle Ford output fall at a far greater rate on a percentage basis. Why does the Permian take it the hardest? First, it's where the most activity is by percentage and it's also got a very steep base decline. The Bakken and Eagle Ford have lower base decline rates than the Permian. But the Permian also rebounds most if/when prices come back. 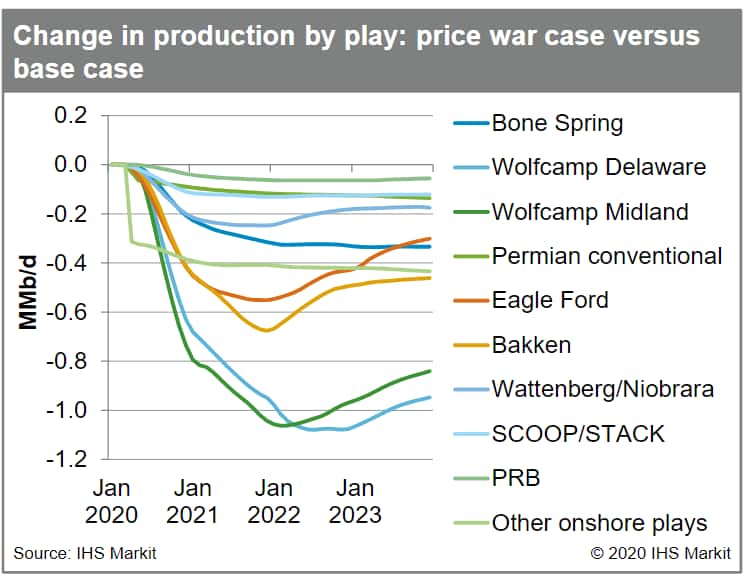 Figure 4: Change in production by play

The Natural Gas Silver Lining and the LNG Wildcard
The prospect for significant decline in associate gas production has really changed the prospects for gas-focused operators. Our expectation for US associated gas production for 2021 went from about 2 BCF a day of growth to roughly 8 BCF a day of decline -- a swing of around 10 BCF a day.

LNG liquefaction plants' gas demand has been all-time highs over the past couple weeks, closing in on about 10 BCF a day. However, the global gas market and LNG demand are not immune from the demand destruction impacts of COVID-19. LNG demand growth is slowing, and when we look around the globe, coal and gas switching as a result of low gas prices is not expected to lead to enough immediate new demand to achieve market balance.

Instead, the market is expected to balance on supply cutbacks. LNG cutbacks are expected across the globe, but they're not all going to be concentrated in the United States. Our current analysis suggests that we could see US LNG exports averaging between 80 and 90% utilized in 2020 and 2021. This would indicate that the US market is going to require a significant amount of dry gas production to come back in 2021 to help balance the market, if that associated gas production does fall off. In order for this to occur, we're likely going to have to see gas prices rise to or above $3, and maybe average about $3.50 for the year in 2021. At these levels, we would expect gas demand from the power sector to decline as coal generation would start to reenter the mix.

In the short-term for 2020, we see prices averaging under $2.00, but expect prices to improve in 2021. How much is going to depend on a lot of factors, including the extent to which associate gas declines, the extent to which the domestic and demand LNG exports decline, and how quickly dry natural gas production can increase.

Midstream in the Crossfire
The NGL outlook shows a drastic drop in NGL supply. In 2018 and 2019, we saw double digit growth in NGL production since it is a byproduct of crude and associated gas growth. 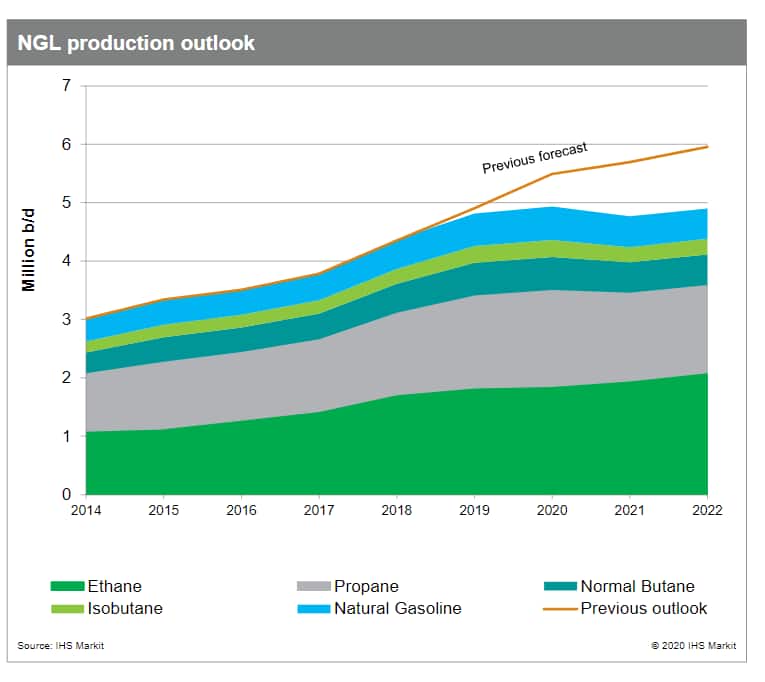 Post-Coronavirus, we still see some increase in NGLs in 2020, kind of year over year growth. But 2021 is very different as NGL production growth will hit the brakes when crude and gas production reverses. Regionally, we expect a reduction from South and West Texas while at the same time there should be some increases from the Utica. Overall compared to our previous outlook, we believe 2021 will have a decline of about 0.9 million barrels a day, with more in 2022.