The Niger Delta Basin: Reform has finally come, but can it revive investment in the oil and gas sector?

The Niger Delta Basin constitutes one of the world's largest Tertiary deltas and most prolific hydrocarbon systems. Notwithstanding the mature status of the Basin, it continues to be highly prospective, boasting a technical exploration success rate of 56%, and an estimated 118 billion barrels oil equivalent (Bboe) of total discovered resource.

With a daily crude production rate of around 2 million barrels the Niger Delta Basin is by far the largest oil producing basin in Africa. Discovered remaining resources are estimated at 66 Bboe, of which 51% is gas; 26 Bboe remains untapped in unsanctioned assets, and discoveries risk being stranded if they are far removed from infrastructure in the more technically challenging deepwater terrain.

Over 85% of the Niger Delta Basin underlies the coastal plain, the continental shelf, and slope of central and eastern Nigeria. Also included in the basin is a small coastal area and part of the shelf of western Cameroon (where it is called the Rio del Rey Basin), much of the offshore territorial waters of Equatorial Guinea west of Bioko Island (part of the Cameroon Volcanic Trend), and an area of deepwater slope that lies within the territorial waters of São Tomé and Príncipe. However, Nigeria dominates the area both in terms of current production (93% of current basin output) and resources (94% of recoverable resources). Nigeria's E&P outlook will therefore determine the trajectory for the wider basin.

The Nigerian National Assembly (NASS) signed the Petroleum Industry Act (PIA) into law on the 16 August 2021, after almost two decades of negotiations. The PIA's passage demonstrates political consensus that oil and gas legal reform can no longer be put off after several failed attempts dating back to the late 2000s.

Will 2022 ignite new project sanctions or will investors take a "wait and see" approach?

The PIA provides the clarity that license holders have been yearning for to make empowered decisions on stalled E&P investments in Nigeria. However pro-investment elements of the PIA may be offset by investor-negative changes that may increase legal risks, operating costs and administrative complexity.

The extent of the backlog of projects awaiting sanction potentially magnifies the impact of the PIA. The window of opportunity to monetize the Basin's resource potential now appears to be shrinking amid accelerated global international oil company (GIOC) disengagement, corporate capital discipline, portfolio consolidation and new climate policies related to the Energy Transition.

Several mid-term projects may remain uncertain, but it is possible that during the next three years the number of projects undergoing sanction could exceed twenty. Growth in the domestic gas market will be an enabler for project sanctioning; whilst established exporters will benefit from existing offshore infrastructure.

New project sanctioning could increase primary gas production by 20% and boost oil output to over 2.3 million barrels per day during the second half of this decade. In the coming months, companies will assess whether the updated framework is sufficient to support the investment required to improve the outlook for the Nigeria's dominant portion of the Niger Delta Basin.

Natural gas production in the Niger Delta Basin is currently around 6 Bcf/d. Flaring has decreased from over 60% of produced gas volumes prior to 2000 to around 10% or less of total gas output in recent years, while gas reinjection has increased from around 10% of produced volumes at the turn of the century to over 25% of total gas production this past decade. The basin is slowly transitioning to gas, but stalled investment has delayed the establishment of infrastructure to create new markets.

One of the aims of Nigeria's PIA is to further encourage the monetization of gas. New regulations and terms to support the midstream and downstream segments of the gas value chain include domestic gas delivery obligations and a midstream gas infrastructure fund which will be financed by a new 0.5% levy on gas and refined product purchases by wholesale customers. The royalty base for natural gas and natural gas liquids has been set at a rate of 5% of the chargeable volume; 2.5% if produced and utilized in country. The domestic gas sales price will be increased by $0.05/MMBtu per year from a January 2021 fixed price of $3.2/MMBtu to reach $4/MMBtu by 2037. 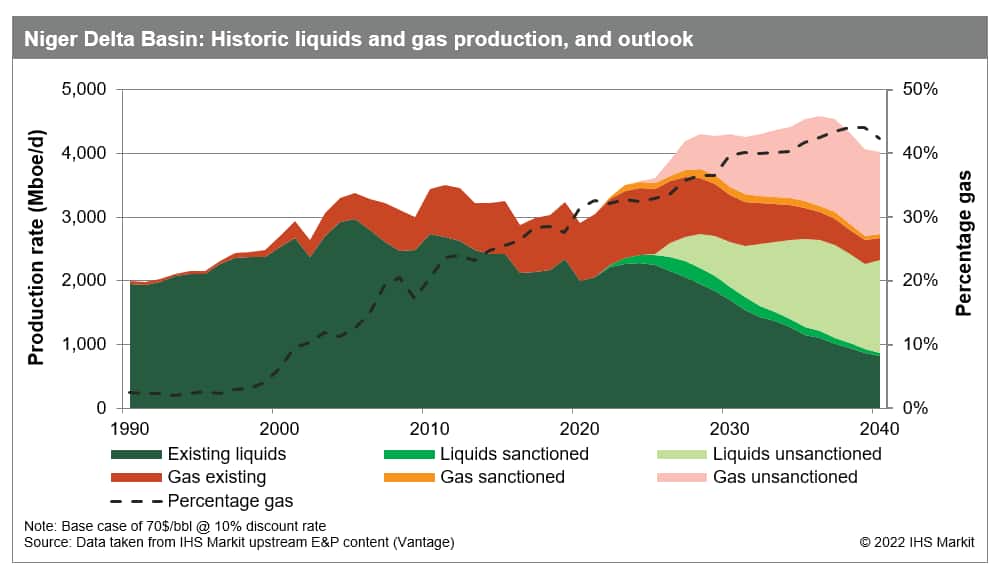 The gap between the volume of gas on offer and available infrastructure to transport and process will present a challenge to the commerciality of new gas developments; a further concern is the financial capability of domestic and regional end-users to honour contractual commitments.

Current strategic Nigerian gas infrastructure projects include the Obiafu-Obrikom-Oben (OB3) pipeline (nearing completion) and the Ajaokuta-Kaduna-Kano (AKK) pipeline (2023 planned completion), which will connect gas production in the southern and south-eastern regions to population centers in the southwest (Lagos), central (Abuja) and northern (Kano) regions of Nigeria. An East West Offshore Gas Gathering System (EWOGGS) is also being developed as part of the Dangote Group's project which will support new petrochemical facilities near to Lagos in the southwest.

Learn more about our commercial and strategic insights into basins in Sub-Saharan Africa.

Learn more about our contractual, fiscal and above-ground risk.