The next wave of Permian Basin growth driven by Majors

The Permian fields of West Texas have a famed history and that history is still being written. The first commercial well was drilled in Mitchell county, West Texas in 1920. By War World II, the region was producing near 0.5 million b/d, supplying valuable fuel to the Allied forces. Growth continued to a peak in 1973 at near 2.0 million b/d before gradually declining to 0.9 million b/d in 2007. The initial tight oil revolution began in North Dakota and the Permian was a relatively late coming to the party, but the basin is now the primary driver of US crude oil growth. The Permian is now dominating the US oil activity with 47% of the nation's drill rigs.

During the tight oil boom from 2011-2017, it was common for these companies to significantly outspend their cashflow in pursuit of production growth, essentially plowing back all profits plus new money into the "drill bit". After price collapse, however, Independents were required by shareholders to prioritize capital discipline over growth, pulling back rapidly on spending and thereby growth. This response from the oil price signal through capital spend to production response is what makes the U.S. crude market so "reactive" to price. This short-cycle price-to-production reactivity now strongly influences global crude oil supply and price.

The Permian Basin accounts for 38% of overall US onshore capital spending in 2018 and is forecast to reach 48% by 2021, driving Permian crude production to grow from 3.8 million b/d by end of 2018 to 6.2 million b/d by end of 2021. Gas production increases 40% as well. Although capital guidance for Permian-focused Independents indicate a 5-10% cut in 2019 spending, Permian operators are forecasting a stronger production growth. Their built up drilled but uncompleted (DUC) wells will help drive growth as pipelines out of the region get completed. Producers are also seeing marginal well productivity improvements due to longer laterals, which are helping them squeeze more output per dollar spent.

ExxonMobil has announced plans to expand Permian production to more than 1,000 mboe/d by 2024, more than quadruple 2018 production. The company operated 44 rigs by year-end 2018, up from 21 rigs in 2017, and plans to run 55 rigs and 16 frac crews by year-end 2019 in the Permian. The company is expected to generate short-term production growth from its legacy Midland position while it develops its new Delaware Basin holdings. ExxonMobil is also leveraging its integrated position, including access to midstream and downstream assets. The company got the final investment decision and started construction on a third crude unit at its Beaumont, Texas refinery, to expand light crude refining capacity by 250,000 b/d. The company is linking a portion of by building a new Wink-to-Webster pipeline with Plains All American Pipeline will link key company Texas oil fields to Texas refineries and carry more than 1 MMb/d of crude and condensates from the Permian to the Texas Gulf Coast in 2021. Additional investment of $2 billion to increase the Baytown chemical plant capacity and other "Grow the Gulf" expansion initiatives will maximize the value of the company's Permian production.

Chevron has announced plans to boost its production to 900 mboe/d in 2023, nearly triple the 2018 production. The company plans to run 20 operated rigs and 7-10 net non-operated JV rigs in the basin. Chevron's 2018 Permian production is nearly 50% higher than that of ExxonMobil on a net entitlement basis, and Chevron's wells have shown dramatic productivity improvements in the past few years, requiring a lower scale of investment compared to ExxonMobil for the forecast period. Chevron's failed bid to acquire Anadarko shows the company is keen to grow yet further in the Permian. Chevron has also bought a Pasadena refinery with 112,000 b/d sweet crude capacity and other associated infrastructure from Petrobras.

BP, through its acquisition of US onshore assets from BHP, with 83,000 acres and more than 3.2 billion boe resources in the Delaware Basin. The recent BP guidance shows a high-density, multizone, long lateral development strategy across Wolfcamp and Bone Spring. The company is planning to run 5-10 rigs in the Permian during 2019-21 and growing the acquired assets (Permian, Eagle Ford, and Haynesville) from 190 mboe/d to 500 mboe/d.

Shell hasn't announced any big plans for the Permian yet. The company has around 270,000 net acres in a JV with Anadarko (now Occidental) and is targeting growth in the Permian. However, like Chevron, Shell is reportedly on the lookout for acquisition targets and may acquire additional acreage, helping drive consolidation in the play. 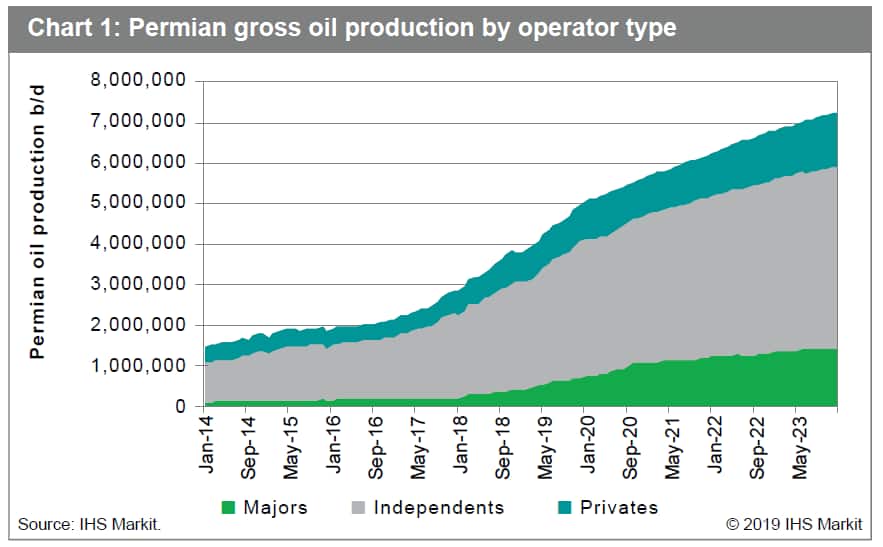 As the Majors enter, the competitive landscape in the Permian will change. Permian growth will be shaped by the actions of the Majors who have more flexibility on where to allocate capital and plan to increase spending over the next five years.

As Independents wrestle with a self-funding business model, which necessarily hampers growth, the Majors will gain in total production share. Privates, with comparatively less productive assets compared to the other two producer types, will still grow volumes but slowly.

To date, the average productivity for Majors is not on a par with Independents, but it is showing continuous improvements as they leverage subsurface data to maximize growth in the play.

Majors are only a small proportion of total Permian oil production, now at around 10%, and even with aggressive growth they would only reach around one-fifth of total production in the next five years. That's because there are more than 380 operators active in the play. But as the competitive landscape changes, the competition for service sector, pipeline capacities, and other logistics will increase, creating execution risk for these smaller companies.

Majors are hoping to obtain more cost-effective service contracts and would have reduced infrastructure risk due to their large-scale operations. Moreover, majors are leveraging their integrated position with their midstream and downstream assets. Finally, from a global oil markets perspective, the large balance sheets of majors tend to make their capital budgets somewhat less sensitive to oil price. Therefore, the Permian reactivity to price signals may be tempered as the Majors revisit their roots in the fields of West Texas. 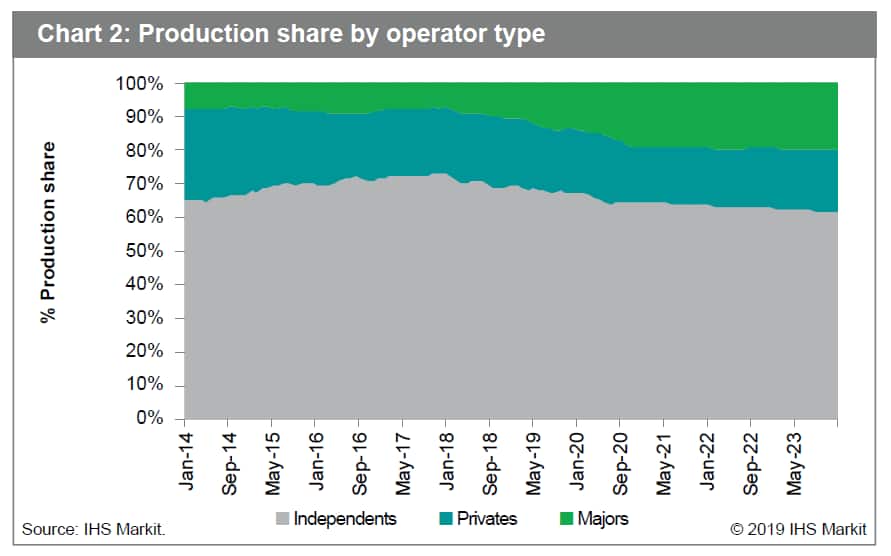 RT @DanielYergin: NOW STREAMING: https://t.co/bdeHQVY1Wl - Today's @WEF panel on the "Future of Fossil Fuels." Many thanks to our panelist…