The maritime industry has seen a decrease in total losses of ships over the past five years (see figure below), attributed by many in the industry to increased safety measures and updates in technological systems, according to the inaugural State of Maritime Safety report published by IHS Markit and available for download. 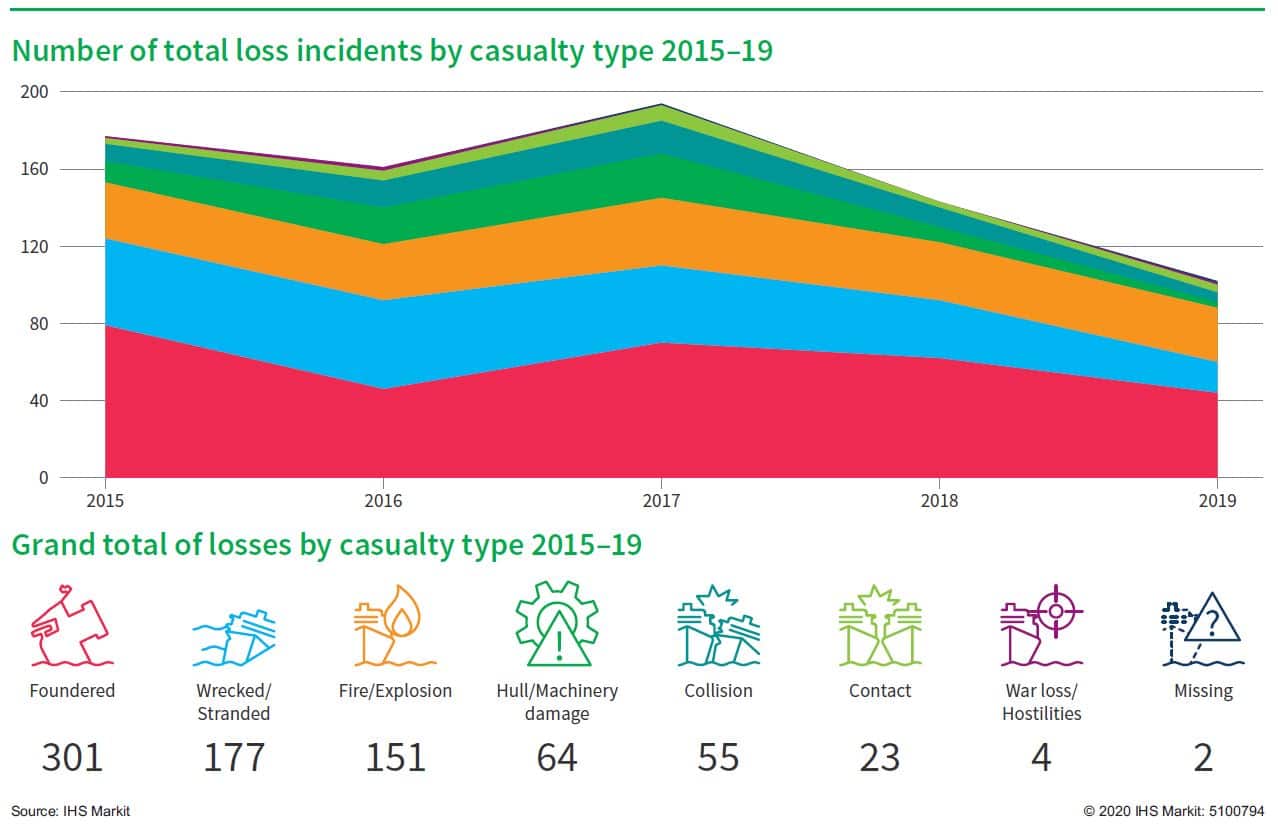 The primary cause of total losses during 2015-19 for all vessel sectors is foundering. Given the rise in extreme weather conditions and ongoing concerns regarding the rising costs of repair and upkeep for machinery and hull damage, it is possible to view the low total loss numbers as a positive sign that current industry measures are working. However, with profit margins still recovering from the 2008 and 2016 economic downturns, the maritime industry is seeing preventable incidents turn into tragedies.

For example, in January 2015, 31-year-old cargo ship Cemfjord capsized while fully laden under extreme sea conditions in the Pentland Firth between Orkney and the Scottish mainland, killing all eight crew members. The UK Marine Accident Investigation Branch (MAIB) released a report in April 2016 noting that the incident was entirely avoidable and likely occurred due to commercial pressure to continue sailing during that time. Furthermore, the vessel capsized so rapidly that the crew were unable to send out a distress call or conduct a controlled abandonment of the vessel. This suggests that industry's approach to casualty and total loss causes must focus on crew emergency training, infrastructure, and prevent commercial pressures overriding a focus on safety.

During a September 2019 IHS Markit roundtable on the State of Maritime Safety data, Peter Hoffman, the head of section for Safety Risk and Reliability at DNV GL, noted key safety lessons for the industry take too long to be learnt as it can take more than a year for accident reports to be shared.

This is in stark comparison to other transport sectors such as aviation. Hoffman noted how quickly safety issues and lessons are made public, for example, the two deadly crashes of Boeing 747 Max in 2018 and 2019 that led to a mass grounding of the plane model.

A 2019 paper in Maritime Policy by Rolf Yohan Bye and Petter G Almklov, titled 'Normalization of maritime accident data using AIS' made a case for how the Automatic Identification System (AIS), usually used on vessels to monitor ships in real time, could be used to normalise accident statistics and consider maritime accident rates. It could also act as evidence to chart maritime accident trends with precision and potentially shorten the time to produce formal accident reports.

While the November 2015 incident of the 40-year-old cargo ship El Faro that sank during Hurricane Joaquin has been largely attributed to the error made by the ship's master for sailing into the path of the storm, the US National Transportation Safety Board (NTSB) noted in its 2018 report that the condition of the vessel and its lack of appropriate lifeboats were contributing factors.

This suggests not only that there needs to be an increased focus on crew training, but that vessel maintenance remains essential to lowering crew deaths and total loss numbers.

The State of Maritime Safety report